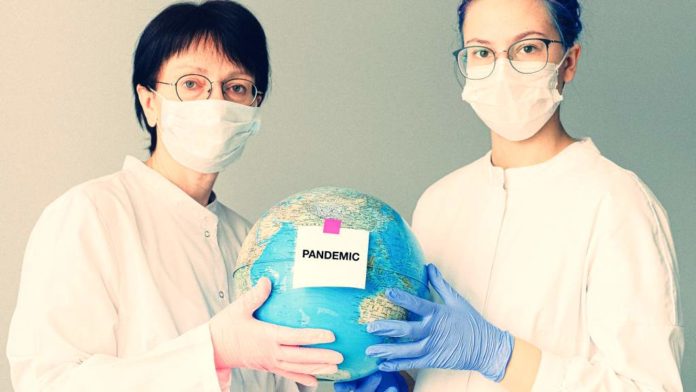 In these days we have learned that we all have a social responsibility, so we have agreed to remain barricaded in the house in order not to infect each other; this same responsibility should from now on be the foundation of our living in community, not only in times of emergency. In fact, we are faced with a completely new and unexpected situation that forces us to mature and change our way of thinking, to assume different attitudes, to seek new ways to serve God’s people. God, who is the Lord of history, speaks in history and asks us to accept with confidence his will, which manifests itself first of all in the recourse of events, but also passes through the positive law promulgated by civil authorities. Jesus also obeyed the Father’s plan, submitting himself in his daily life to the legitimate Authority of his people and also to that, considered illegitimate, of the Empire of Rome. Today, more than ever before, we must proclaim loudly and forcefully that God does not renounce his intention to make all things new; in this moment of sorrow, this happens through a regeneration that must never lose sight of the mystery of Easter.

At the moment in which we are living, the fissures opened in the political and economic systems that regulate the life of nations and that seemed to want to guarantee to the utmost the conquered well-being; the fissures have become cracks and then deep fissures that clearly show their inability to hold the structure. Even the so-called culture of rights must give way to other demands that have become priorities in the meantime. We are faced with an invisible enemy who has uninhibitedly crossed the borders between states – even those who tried in vain to erect barriers – and travelled on planes in the bodies of unsuspecting passengers. The virus passed in a flash from one continent to another, overwhelming what it encountered in its path and mocking our certainties, which unfortunately turned out to be a miserable thing. It continues to circulate sowing suspicion and insinuating fear even among the closest family members.

Everyone looks at each other with suspicion, friends look at us with distrust, relationships between people are as if suspended; and very few manage to give voice to feelings, to express the fears or anxieties from which they feel gripped. In a few months, all the certainties of which we were proud of have crumbled; and we are witnessing a new, tiring second beginning in which many things will be questioned.

Circumstances impose a change of pace on us, they call us to a radical conversion: if we want to live at peace with ourselves and with others, we are being given a pressing, even imperious, invitation to put aside our unbridled individualism, our narcissism and to look up to those close to us, regardless of the evil we have received, to look at their needs, recognizing each other’s needs. How many times have we experienced in person that, for better or for worse, the consequences of our actions always fall on others!

We are part of humanity and humanity is part of us because it is deeply rooted in us; this interdependence is a value that allows us to move now to solidarity in a more conscious way and to adopt it as a choice of life. Good feelings, in fact, do not always arise spontaneously, we are well aware of them, nor are they lasting in themselves; they are like wildflowers that wither after a short time and die. The experience we are having in this period is certainly hard; it puts us to the test in our daily lives; accustomed as we were to consider the house as a place to sleep, not to live together 24 hours a day, it has allowed us to rethink our closer relationships, revealing itself not only as a source of tension but also and above all as a true school of humanity. The future will tell us if we have been promoted.

Reality is putting us before God who listens to the cry of Israel and makes his voice heard by Moses; who pushes the people to set out and opens the sea to its passage. After all, however, we do not like this God, because he forces those who really want to know him to cross the desert, where there is neither the food of Egypt nor the water. Although it is not convenient for us to recognize him, we know that only by facing the test, we will become adults.

In a time of emergency like the one, we are living, faith and devotion must find new ways. Closing the churches was certainly painful, but in the end, if we think well, the churches are only useful tools for the community of believers to find themselves, to celebrate, especially to celebrate the Eucharist. The Church with a capital C is something else; it is made by believers; moreover, we know from history that at the beginning of Christianity people lived without churches, as it still happens in those parts of the world where Christians are persecuted.