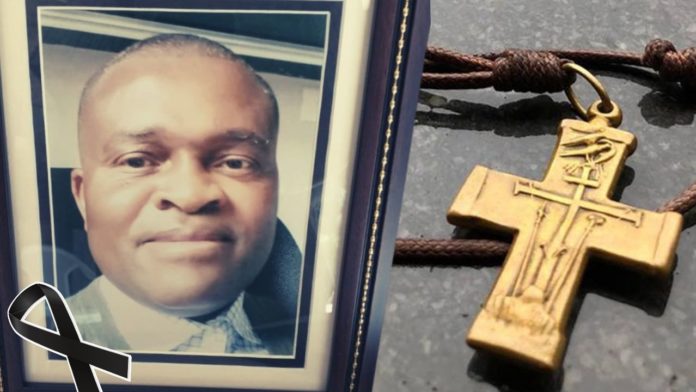 Redemptorists all over the world are in mourning. We have lost a much-loved confrere, Fr. Zephirin Ndongala Luyila. Fr. Zephirin was the Coordinator of the Redemptorist Conference for Africa and Madagascar, known as COREAM.

Father Zéphirin LUYILA NDONGALA, Congolese nationality, born on 29 January 1965 in NDEMBO, was originally from the Sector of KIVULU, MBANZA-NGUNGU Territory, Province of KONGO-CENTRAL, in the DEMOCRATIC REPUBLIC OF CONGO (hereafter DRC). He was baptized Catholic as a child.

His Father Edouard LUYILA LUAKANDA, a teacher, originally from the village of KIKIADI, in the KIVULU sector of KONGO-CENTRAL, had died on 7 May 2006. Her mother, Hélène LUSIKILA from the village KIPASI, KIVULU Sector, KONGO-CENTRAL, had died on 26 May 2015. Her parents were Catholics, well involved in the Legio Mariae. Father Zéphirin was the fifth of a family of 8 children, 3 boys, and 5 girls. Of the girls, 2 have already died.

What we can learn from him

He returns to the Father’s House in the total discretion on 11/11/2020, at the age of 55, after 34 years of religious life and 27 years of very well accomplished priestly ministry.

Father Zéphirin Luyila sought that the presence of God is found in his life, that the lamp of Christ is kept lit, and that the choice of his life is that of living in the trust of the Lord.

The following timeline captures the sadness and emotion of Fr. Zephirin’s last day as a treasured Redemptorist and wonderful human Being. This account was shared with us by the Redemptorist Kenya mission.

Today, 11th November 2020, around 11.00 am, I got a frantic call from Fr. Toppo. Very disturbed, he was saying, ‘I think Zephirin is gone.’ Soon I called Cornel, who was sobbing said that Zephirin is no more. It all happened all of a sudden this morning.

Fr, Zephirin was not keeping good health for the past one month. He had blood sugar and BP. He was also under treatment for pneumonia at St. Odilia’s Dispensary at Karen. For the past week, he was being taken to the dispensary for treatment. At times, Sr. nurses came to our house to give him insulin. On the 9th, he had a Covid-19 test, and the result came out on the 10th, saying that it was negative. Zephirin was happy to know that result because he was much worried about it.

On 11th (Wednesday), at 9.00 am, Fr Cornel met Zephirin in his room. For the past few days, Cornel was offering Mass in Zephrin’s room. Today he said, that he would offer Mass on his own. Cornel made arrangements for the Mass. At 9.30 our cook, Helen, came with breakfast. Meanwhile, Toppo also came to Zephirin’s room and said that he would take him to the hospital once he had breakfast.

After 10.00, Toppo came and knocked at Zephirin’s room. There was no response. Again he knocked loudly. But since there was no response, he opened the door, and then Toppo found Zephirin leaning on a pillow with his legs crossed. Since there was no response from him, Toppo touched him and found very cold. Immediately he called Cornel, and when they realized what has happened, Cornel rushed to Odilia’s dispensary to get the medical officer what was treating Zephirin. He came immediately with Cornel and examined Zephirin. The pupils were bilateral unresponsive to light, cold to touch, and negative gag reflex. There was no chest movements. He was pronounced dead at 11.20 am by Nester Sila, the clinician.

Hearing the news, Fr. Raphael, who was preaching a retreat at Benedictine sisters, rushed to our house. Fr. Paul also was brought back to the house from another retreat place. Meanwhile, our neighboring sisters came to the house. Toppo and Cornel went to the police station. With the medical report, the police also gave a report. But later, the police said that it would be safe if we take the body for autopsy since he died in his room. We had to wait a couple of agonizing hours waiting for the police forensic surgeon. He came around 3.00 pm and examined the body and the room, took some pictures, and gave clearance to take the body to the mortuary. By 4.00, the body was shifted to St. Mary’s hospital.

Meanwhile, Fr General in Rome was informed of the tragic death of Zephirin. He contacted the Vice-provincial in DRC, Fr Jean Robert. Also, our provincial in India was informed of this tragedy. The Vice-provincial was of the opinion if possible to send the body to Congo. Immediately Raphael got in touch with the embassy and a travel agent. Embassy officials gave an appointment for Friday. We can have an autopsy only when we come to know when the flights will be available.

At 6.00 pm, we had a Mass for Zephirin in our chapel, in the presence of a number of sisters and brothers and eight Redemptorists.