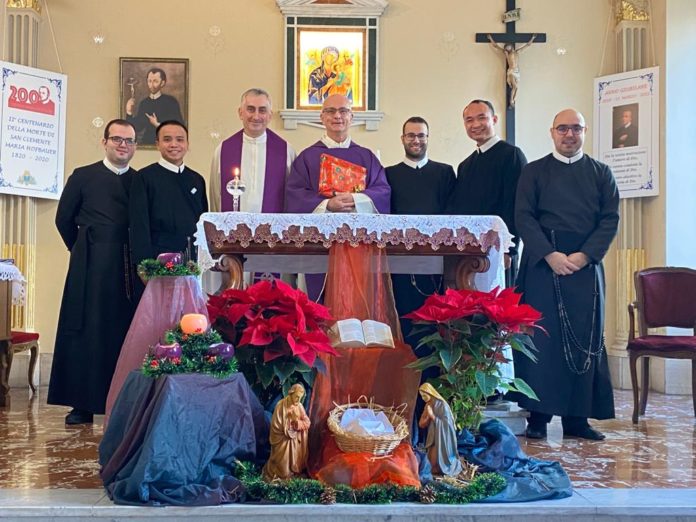 (Rome) From December 18 to 20, we experienced, as students of the European Conference, the retreat in preparation for Christmas. This year we had an exceptional preacher: Superior General Fr. Michael Brehl.

Due to the current ongoing pandemic, Father General was in Rome and, unable to travel, immediately accepted our invitation.

He reached our community of San Gioacchino on Friday, December 18 in the evening and with the prayer of Vespers the retreat began.

They were days full of meetings, conferences, but above all moments of prayer and adoration, concluded with community sharing.

The theme of the Retreat was the message of Fratelli tutti by Pope Francis, but there were frequent references to the liturgy (which made us listen during these days to the annunciation to Zechariah and Mary) and to the Christmas Novena composed by St. Alphonsus. Fr. Brehl gave a “Redemptorist” reading of the encyclical that invites us to meditate on the ills of our society in order to become like the Good Samaritan who soothes the wounds of his neighbor.

Interesting was the explanation of the “principles” of the Encyclical that we are called to incarnate in our Redemptorist life and mission: responsible love, which calls us to go out of ourselves and enter into relationship with others; love that generates dignity and respect, that invites us not to distinguish ourselves from others and that always seeks the common good. In synthesis, the basic principle is the love that urges us to solidarity; that is, to “think and act in terms of community” (Fratelli tutti, 116): this aspect was interesting for us and seems to explain well the theme of the Sexennium “Witnesses of the Redeemer: in solidarity for the mission in a wounded world”.

Father General constantly referred to the life and works of St. Alphonsus, who proclaimed the Incarnation as the greatest event of God’s solidarity and love for us. He says: “The Eternal Word from God became man, from great he became small, from lord he became servant, from innocent he became guilty, from strong he became weak, from his he became ours, from blessed he became afflicted, from rich he became poor, from sublime he became humble” (titles of the first nine Meditations of the Novena of Holy Christmas).

A final reference was given to the figure of St. Joseph, whose Jubilee Year we are celebrating. “May he, guardian of the Redeemer and of the Blessed Virgin Mary, help us to overcome crises in order to realize God’s dreams in our lives”: concluded Fr. Brehl.