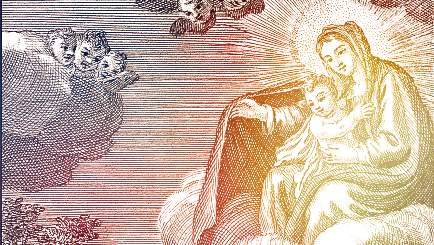 “In these days, …in many houses the Christmas tree and the crib are being prepared… They are signs of hope, especially in these difficult times. Let us take care not to stop at the sign, but to go to the meaning, that is, to Jesus, to the love of God that He has revealed to us, to go to the infinite goodness that has made the world shine forth. There is no pandemic, no crisis that can extinguish this light. Let it enter our hearts, and let us hold out our hands to those who need it most. In this way, God will be born again in us and among us[1].

On the Solemnity of the Immaculate Conception, recently celebrated, we had the opportunity to “rediscover” once again in Mary the icon of “welcome” and “hope”. On the liturgical page of this solemnity, there are at least two verbal forms that more than others express, and we could say “dispose” Mary to the reception: the verb “to enter”, and the verb “to conceive”. These are terms that in some way “need” “permission”, that is, they question the freedom of the other because they “question” him or her about the possibility of being able or not able to accept. On the other hand, the same terms could express “violence” where the will, the freedom of the other, is not respected.

Another light on these terms can be received by reading them in their argumentative context: “Upon entering her, [Gabriel] said: ‘Rejoice, full of grace: the Lord is with you. We find explicit in this brief biblical passage the “certainty” of the presence of the Lord, who takes the initiative. We find again that “movement” that goes from God to man (exitus). A movement that Mary is “capable” of welcoming (reditus), in her life and even more so in her womb – “you will conceive a son” – but that she does not keep for herself – “you will give birth to him and call him Jesus” – because the one “who will be born […] will be called the Son of God”, not (only) “his” son (cf. Lk 1-26-38).

In this attitude of welcome, which arises from listening and opens up to the gift, we can see, in the watermark, the role of Mary as intercessor, advocate, a sign of sure hope and consolation (LG, n. 68). This “ministry”, proper to the Mother of God, is most evident in the liturgical “prayers” of the Immaculate Conception. A first time in the collection[2], a second time in the prayer on the offerings[3], and again in the preface where the title of “advocate” is expressly used[4]. 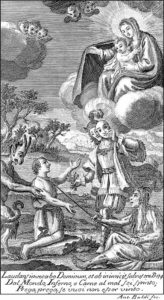 O Father, who in the Immaculate Conception of the Virgin Mary has prepared a worthy dwelling place for your Son, and in anticipation of his death, you have preserved it from every stain of sin, grant us also, through his intercession, to come to you in holiness and purity of spirit.

(Collect of the Solemnity of the Immaculate Conception)

In the fourth Advent meditation, Alphonsus writes of Mary who, accepting to be Mother “of such a Son, accepted to be the mother of our health[5]. The Marian theme, and specifically, Mary’s “being near” as our Advocate, rather than being treated in one place on the meditative path returns and marks the step in each Alphonsian meditation. Doctor Zelantissimo turns to her, recognizing her primarily as the “Mother” of Jesus and her mother[6]. “Hope” in which to trust[7], “queen” and “help” to which to recommend oneself in temptations[8]. As well as “lady” to ask support to remain faithful to the recognized love[9]. She who “can do everything with God [10]and that he “gets as much as he wants” from his Son[11], who can impetrate the holy perseverance[12], the sum grace of prayer[13], the light and the grace of loving that Son who so loved man that he died for him[14]. And, again, it is recognized as “Most Holy Refuge” and “consolation”. a [15]“grieving mother” who “participated in much of the sorrows of Jesus”[16].

The “welcoming” womb of Mary

The “figure” of Mary, in Alphonsian discourse, is never separated from that of Christ her Son. A relationship stigmatized in the text also by the reference to the womb of the Mother, as if it were a symbol, a sign, of the particular union between her and her Son[17] and, in Him, with all men. In her womb – writes Alfonso – “she wants to incarnate the Word”. [18]and “from the womb of Mary” he “accepted the obedience given to him by the Father of his Passion and death[19]. “From the time he was in Mary’s womb every particular sin was done before him and every sin immensely afflicted him […]. So that that agony which the Redeemer suffered in the garden at the sight of all our faults which he had taken upon himself to satisfy, he suffered in the womb of the Mother”[20]. But “being in Mary’s womb, what grieved him most of all was to see the hardness of the hearts of the men who had despised after her Redemption the graces that he had come to spread on earth[21].

From the Alphonsian discourse as a whole, Mary’s womb seems to assume the meaning, we could say symbolic, of the welcome and the intimate, as well as the particular relationship between the Mother and her Son, a relationship that does not remain closed, but opens to proximity. It is in virtue of this intimate relationship that Alphonsus comes, especially in his “confidential conversations”, not only to pray to Mary – that is, to address his prayer to her – but also to ask her “daringly” to pray for him, to be welcomed, as a mother would do when she “does not see her son changed”[22].

… a portion of food for thought

O my Jesus, you have come down from heaven to make me love you; have you come to embrace a life of sorrow and death on the cross for my sake so that I might welcome you into my heart, and I have so many times been able to drive you away from me, saying, recede from me, Domine, depart from me, Lord that I do not want you? (Cf. Advent, 196).

Blessed Virgin, you who welcomed with such affection and consoled the Holy Magi, welcome and console me who still come to visit and offer myself to your Son. My Mother, in your intercession I trust very much. Commend me to Jesus. To you I hand over my soul and my will, you bind it forever to the love of Jesus. (Cf. For the Eighth Epiphany, 228).

Fr. Antonio Donato, C.Ss.R.;
the original text is in Italian

[2] “O Father, who in the Immaculate Conception of the Virgin Mary prepared a worthy dwelling place for your Son, and in anticipation of his death preserved it from every stain of sin, grant us also, through his intercession, to come to you in holiness and purity of spirit” (cf. Roman Missal).

[3] “Accept, Lord, the sacrifice of salvation, which we offer you on the feast of the Immaculate Conception of the Blessed Virgin Mary, and as we recognize her preserved by your grace from every stain of sin, so, through her intercession, make us free from all sin” (Ibid.).

[4] “[…] From her, the purest virgin, was to be born the Son, the innocent lamb who takes away our faults; and you, above all other creatures, predestined her for your people, advocate of grace and model of holiness” (Ibid. ).

[5] A. M. de Liguori, [Meditations] For the days of Advent until the novena of the birth of Jesus Christ, in Opere ascetiche, IV: Incarnazione – Eucaristia – Sacro Cuore di Gesù, Redemptoristi, Rome 1939, med. IV, 148.