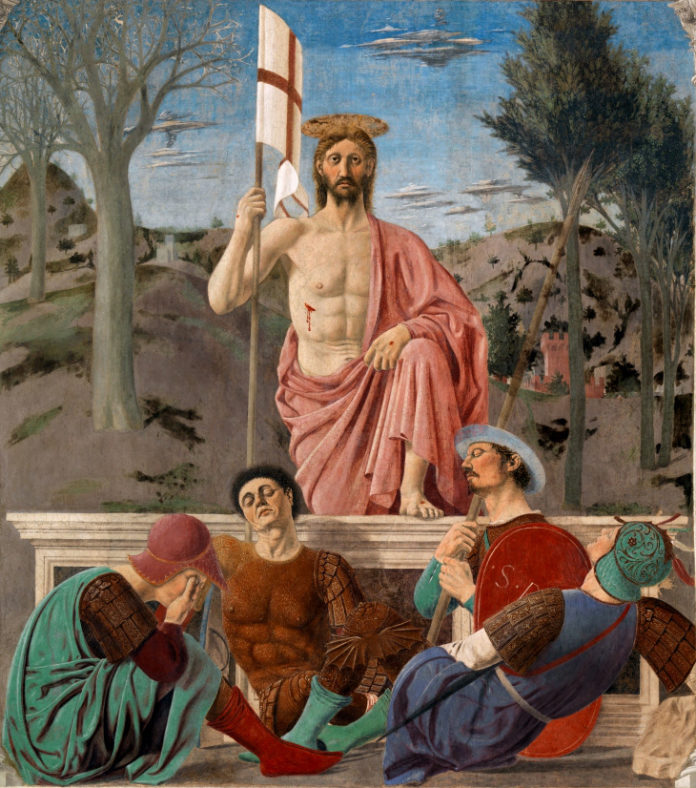 Jesus Christ is the living one. He is not among the signs of death. He has left them behind. But he is there, not in the tomb, but in the new joy that demands more than ever the perspective of a faith that does not resign itself, because it is encouraged by the love that seeks to continue loving, to follow in the footsteps of the love that makes itself the way and voice of service in the here and now of history.

The resurrection did not take Jesus to some lost or distant paradise. It brought him back to us alive, more deeply present in the fabric of our history. If he was contained in the loving womb of a faithful young woman in his historical birth, now he has been regenerated in the young womb of life and of history, which begins again as a new creation, of which he is the first-born. Thus Jesus Christ continues to be reborn where all death is defeated, where life is decrypted. Resurrection is not only the gateway to eternal life in an unknown hereafter, detached from this hereafter of ours. It is the force of eternity in time. It is time open to the immensity that only the force of love makes credible. There is an eternal beyond because there is a hereafter that can be its image and likeness. Without this perspective, resurrection would be a mere alienating and dehumanising escape, and historical time a mere succession of moments whose end would be the meaninglessness of death.

Easter opens up a new perspective that gives life a new dimension, a new meaning and a new dynamic. If only our life as Christians could manifest it, at least with glimpses of that singular beauty, that it could be noticed that we are children of life without more, of love without limits, of a fraternity/sorority in solidarity, without borders, because in our existences there is always newness, the freshness of alternatives, the expansion of horizons, no place for the closures of outdated sepulchres, no cult of dead truths, only celebration of life, of life in abundance.

I want to draw attention to the theological task according to this paschal dynamic of new and abundant life from this experience. To do so, I would like to highlight one note. This note is in tune with two things, with the inspiring invitations that Pope Francis makes to us in Veritatis Gaudium (2018), and with an element that seems to me to be very paschal and that theology in general, and moral theology in particular, seem to me to need to include in a more significant way.

Pope Francis, among other things, recalls one fundamental thing, namely, that “the vast and multiform system of ecclesiastical studies has flourished over the centuries thanks to the wisdom of the People of God, which the Holy Spirit guides through dialogue and discernment of the signs of the times and of different cultural expressions” (VG, “Proemium”, 1, cf. 3). I underline two things here: the wisdom of the People of God, and not only of “specialists” and the dialogue with the different cultural expressions, not only with one, for example, the “Greek-Latin-Eurocentric” one. We are not saying that we can dispense with the specialists of yesterday or today, nor with a certain socio-cultural imprint that has carried forward the Judeo-Christian heritage for centuries. Still, the power of the reception of the paschal revelation of the mystery of Jesus Christ is not exhausted there.

On the other hand, we are reminded that in theological and philosophical learning, it is still necessary to overcome the “divorce between theology and pastoral care, between faith and life” (VG, “Proemio”, 2). He also – quoting Benedict XVI – recalls “the urgent need to live and guide the globalisation of humanity in terms of relationship, communion and participation” […] and that “to achieve this end in a realistic way”, the Pope “invites us to “broaden reason” to make it capable of knowing and guiding the new and imposing dynamics that torment the human family, animating them in the perspective of that “civilisation of love”, of which God has placed the seed in every people and every culture” (ibid.). All this calls for interactive knowledge and the exercise of inter-transdisciplinarity (cf. VG, “Proemio”, 2; 4c).

All this effort is necessary out of fidelity to the paschal dynamic of revelation, which always calls for transformation, faithful and creativity, and out of the need not to remain locked up in myopia and small self-sufficient castles. Or, as Francis reminds us: “the theologian who is satisfied with his complete and finished thinking is mediocre. The good theologian and philosopher have an open thought, that is to say, incomplete, always open to the maius of God and truth, always in development” (VG, “Proemio”, 3).

From these inspirational keys, here is the note that I would like to highlight, which is then specified in an element that concretises the paschal dynamic in the theological task. This note is also pointed out by Francis when he says that “the urgent task” is above all “to elaborate intellectual tools that can be proposed as paradigms of action and thought and that are useful for proclamation in a world marked by ethical-religious pluralism” and that this urgency “requires not only a profound theological awareness but also the ability to conceive, design and realise systems of presentation of the Christian religion that is capable of going deeper into the various cultural systems” (VG, “Proemio”, 5). So, we must ask ourselves if this is the fundamental note of our theological-moral work, if we are really assuming a sincere dialogue with “ethical-religious pluralism” and if we are generating and proposing new paradigms or if we continue to recycle the old ones, even if this “recycling” in part remains an important task.

Finally, I would like to highlight the element that specifies the concreteness of all that has been said, that is, that could verify if we are really carrying out a paschal moral theology, in transformation and bearing fruits of new life, is feminist inclusion. Inclusion that we should see in the bibliographies of courses, seminars, journals, theses, etc., of our centre of studies. We are not talking about the so-called “pink quota”, which in general is nothing more than an elegant “way out” of a certain camouflaged patriarchal machismo. We are talking about the real inclusion of people and visions that, for a long time, have been bringing serious transformations to be scientific and theological work. What is being done is too little and almost insignificant. It is a great debt and a wasted Easter hope. To conclude, I recommend reading, as much as to make visible a world that seems to be so difficult to make visible: the person and contribution of bell hooks (Gloria Jean Watkins [25.09.1952], Afro-American writer, feminist and social activist). The name bell hooks derives from her maternal great-grandmother, Bell Blair Hooks, and she always writes it in lower case. Among her contributions: Feminism is for Everyone; All About Love: New Perspectives. Feminists in various fields, especially theological, are very numerous, as are various Catholic, ecumenical and interreligious groupings; one would hope that they would be better known and taken into account in our studies. Perhaps this could be “a” sign that there has been an Easter of transformation at the heart of moral theology.