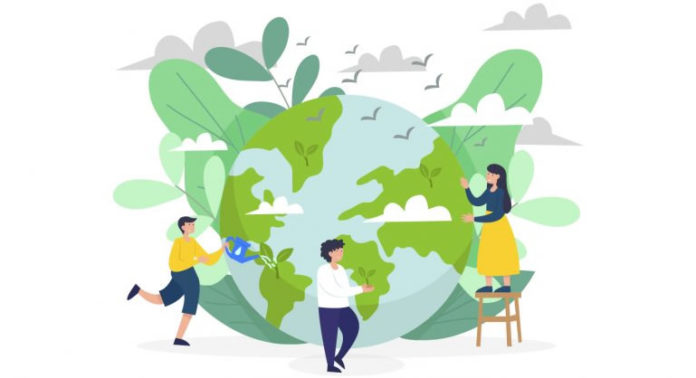 On the occasion of the new government’s formation led by Mario Draghi, there was much talk of “Ecological Transition”. In fact, Gaël Giraud has been talking about this subject for more than 10 years, at least since he published his “Illusion financière. Des subprimes à la transition écologique”, published in Italy in 2015 under the title “Transizione ecologica. La finanza a servizio della nuova frontiera dell’economia” (EMI 2015).

Father Giraud has been a Jesuit since 2004, but he is also a leading economist: chief economist of the Agence Francaise de Développement; director of research at the Centre National de la Recherche Scientifique; member of the Sorbonne Economics Centre-Laboratory of Excellence in Financial Regulation and of the Paris School of Economics. He is currently a Research Professor & Director of the Georgetown Environmental Justice Program at the Jesuit Georgetown University in Washington.

Giraud’s book takes as its starting point the ‘financial heart attack’ of 2008 that generated a severe financial crisis that quickly turned into economic recession and then unemployment, with workers and families bearing the brunt of the costs. Giraud’s work has several merits. Among these is that of making the most complex aspects of the opaque world of international finance comprehensible. In fact, by composing in a clear and intelligible framework the technical, institutional and cultural aspects of the financial world, Giraud explains in depth which factors generated the 2008 crisis: not a sudden event but “the consequence of a logic of action knowingly pursued by a political-financial complex that has taken possession of the levers of power in advanced societies” (M. Magatti). A further important merit is that it offers a working horizon to move to achieve a new development model.

The serious crisis of 2008 has, in fact, highlighted the urgency of a paradigm shift to overcome the hyper-individualistic and hyper-technical vision established in previous decades and the cause of the crisis. Above all, Giraud’s narrative shows how, despite its fundamental role, finance left to its own devices can do a lot of damage. J.M. Keynes had already warned against the “liquidity fetish”, i.e. the pathological aspect of financial markets interested only in short-term returns. In 1933, in the aftermath of the Great Crisis of 1929, the great economist wrote in The New Statesman and The Nation: “The decadent international, yet individualistic, capitalism into whose hands we have fallen is not a success. It is not intelligent. It is not beautiful, it is not just, it is not virtuous, and it does not provide any good”.

Giraud then reminds us that sustainable growth can only be developed over the long term by involving society in its entirety, in its human, technological, institutional, cultural and social dimensions, with an economic approach that focuses on investment, the overall quality of economic, institutional and environmental life, social cohesion, and the development and enhancement of personal skills.

In short, the energy and, more broadly, ecological transition has two objectives: firstly, to reduce CO2 emissions and, more generally, the material footprint of the economy; secondly, to adapt economic systems to the ecological upheavals already underway. The reason for the urgency of reducing emissions is also dictated by the need to free economic systems from dependence on fossil fuels. Indeed, the decline in oil investments, which started already in 2015, will lead to a lack of oil extraction and production. This means that the price of fuels in the coming years may vary a lot and, above all, that in the future, not everyone will have access to oil and its derivatives, as the quantity will be reduced. The energy sovereignty of many countries, led by Italy, requires that we learn to do without fossil hydrocarbons (oil, coal, gas). The same applies to independence from certain metals (also non-renewable resources) that are becoming scarce, such as copper, cobalt and phosphate, whose density of available reserves has been decreasing considerably for several decades.

In concrete terms, the ecological transition is based on four major projects: the thermal renovation of all public and private buildings; the replacement of fossil hydrocarbons with renewable energy sources; the transition to green mobility, favouring the transport of people and goods by rail; and the invention of agro-ecology and green industry to promote the ‘fourth industrial revolution’, that of the repairable and recyclable in terms of water, energy, mineral resources and waste.

It is a great political, economic and social project, but also a spiritual one (G. Giraud) because “in this garden that God gives us, human beings are called to live in harmony in justice, peace and fraternity… And when nature is considered solely as an object of profit and interest – a vision that consolidates the arbitrariness of the strongest – then harmony breaks down and serious inequalities, injustice and suffering occur” (Pope Francis 2020). Moreover, everything is connected, and we must not forget that “we cannot delude ourselves into thinking that we can heal our relationship with nature and the environment without healing all fundamental human relationships” (LS, no. 119).