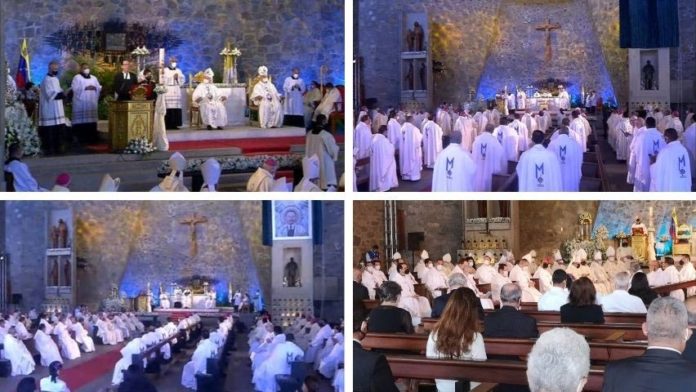 I did not find a Venezuelan here in the Vatican, whether in the square or in a private audience, who in the middle of the conversation or even at the end said: “When is the beatification of Gregorio? They carried him in their hearts [1] (Pope Francis).

In a small Andean village in the State of Trujillo, Isnotú, the child José Gregorio Hernández opened his eyes to the world. Under the union of the couple Benigno Hernández and Josefa Antonia Cisneros. A very simple family, but also very close to the encounter with God. He always obtained an education in values, Christianity and above all virtues necessary for his life as a human being. As a student, he was never satisfied with the minimum. He always aimed for the greatest, best ideals and great purposes that will help him to be a great professional. He dreamed of being a great lawyer. However, after a personal reflection, he saw in medicine a way to help and forge great purposes within his community and surrounding areas. He was sent to Caracas to study medicine at the Central University of Venezuela. With great qualifications and performance, he obtained his degree. Upon completion, he fulfilled his promise; he returned to his hometown to attend free of charge to the population that required medical attention.

Sometime later, he was called on a scholarship to study in France, which led him to study in-depth and specialise in Microscopy, Bacteriology, Histology and Experimental Physiology; not only did he want to fill his mind with content, but when he returned to his country (Venezuela) he brought with him many tools for Venezuelan medicine, among them the improvement of the microscope and the foundation of large experimental laboratories. But his life was not only dedicated to science but also to accompanying and caring for the most vulnerable. It happened in one case that when he visited a sick person to treat them. He knew that they did not have the money to buy medicines, our blessed man would leave them the money they needed to buy them, his care was not only of quality but also free, he did not seek to enrich himself with his profession, but rather he took into account the benefits he was giving to the vulnerable population of that time. Since that time, he has been respected, and today he is considered a great intercessor before God if he is invoked with all his heart [2].

In an interview, the Superior General of the Jesuits, Fr Arturo Sosa, narrates that “José Gregorio Hernández integrated an excellent scientific formation in his spiritual experience which led him to put himself at the service of those who needed him, with a special predilection for those who could not repay him”[3].

He was a tireless seeker of his vocation, which is why on both occasions, he asked to enter religious life, first as a monk of the Carthusian monastery, then in the seminary as a priest. But on both occasions, he had to withdraw because of health problems, and it was then that he returned to his own country. It was a magnificent episode to show that service is not only used in the consecrated life but also by the laity. His actions and his option for the poor led him to have great vitality for service and generous dedication to the abandoned and dispossessed.

Things of God? Legend has it that this great man had offered his life so that peace would reign and the First World War would end. On 28 June 1919, fifty countries signed the Treaty of Versailles[4] to put an end to the war. In Venezuela, it is not known exactly how many cars existed on that date (1919), what is certain is that Dr José Gregorio Hernández was coming from treating a poor patient when in the parish of “La Pastora” in Caracas, he was run over and then seriously injured. On his arrival at the hospital, he died on 29 June 1919, with the thought of having found the signing of this great agreement a fact[5].

After the death of this great Venezuelan, many people have taken up his prayers and prayers before God, many asking for spiritual and physical healing, others pleading for his company in medical studies or to accept his intentions. For the devotees of this great Christian, there is no social or political distinction but rather the unity of a nation and the achievement of a common goal to make their prayers reach the divinity. There have been many moments of difficulty in his process: firstly, to decide who would take up the cause. In the end, the Archdiocese of Caracas took it on and carried out all the steps required by the Holy See to present the case. But there was something that often slowed down the whole process. It is no secret that the distortion of his devotion in sectarian groups, such as Santeria and witchcraft, tarnished his Christian image. As the process went on, many things got rectified, and 72 years later, we have the long-awaited beatification of the “doctor of the poor”.

Venezuela of today is not very different from the one in which he journeyed, from the doctor’s surgery to the classrooms and from the home to the academy. The environment in which our doctor of the poor died was very similar to that of today: little investment in health, hospitals with little capacity to meet the demands, universities closed by political orders, malaria and tuberculosis, were the order of the day, it was a Venezuela submerged in a silent crisis. In the present, one can glimpse a massive exodus of so many devotees and a social, political and economic situation, which makes his native country a physically desolate space, lonely streets and more and more closed temples, questioning the so fanned expectation of his beatification. Such a situation was unthinkable 34 years ago when Pope John Paul II declared him “venerable”.

However, the death of Dr José Gregorio Hernández came at a difficult time for this Caribbean country. But then, what followed for Venezuela was great progress, thanks to oil exploitation and serious institutional and scientific advances, to the point of being the country that saw the birth of the diamond scalpel (1954), and the growth of the Church was progressive at this time. The beatification of the venerable servant of God also takes place in the midst of a global pandemic and a political and institutional crisis. But this should not be a cause for sadness. On the contrary, it is a clear message of hope and joy.

The fact that the beatification of a great doctor is taking place in the midst of this Covid-19 pandemic is a light in the midst of so much darkness. Perhaps many do not understand the action of the Holy Spirit in the midst of this whole event, but it is a clear invitation to draw closer to our Lord. As in the past, Blessed José Gregorio Hernández will be the beginning of a time of grace and peace, which is preceded by this great moment. Finally, if these people waited so long to be able to live this moment, it is because it happened at the time when they needed it most, let us not lose our hope, this historical event should introduce us to a change in our lives, it is time to rejoice, to seek God at this juncture, to look at this example of life and imitate his virtues for the good of the neediest of this wounded world.

From the Congregation of the Most Holy Redeemer (Redemptorist Missionaries) in Venezuela, we have waited with great optimism for this great news, bringing from our homes, this hope, which means the elevation to the altars of our doctor, who like St. Alphonsus, dedicated himself to the poorest. We have a country wounded by indifference, in need of witnesses who assume many of the virtues that characterised our new Blessed, and in this way, we build a new country that grows in love for our Redeemer. United with Mary, mother of Coromoto, and guided by our blessed Maria, Candelaria and Carmen, we will reach the homeland we long for. This is the beginning of the grace that is coming for our beloved Venezuela.

1] Message of Pope Francis on the occasion of the Beatification of José Gregorio Hernández 29 April 2021.