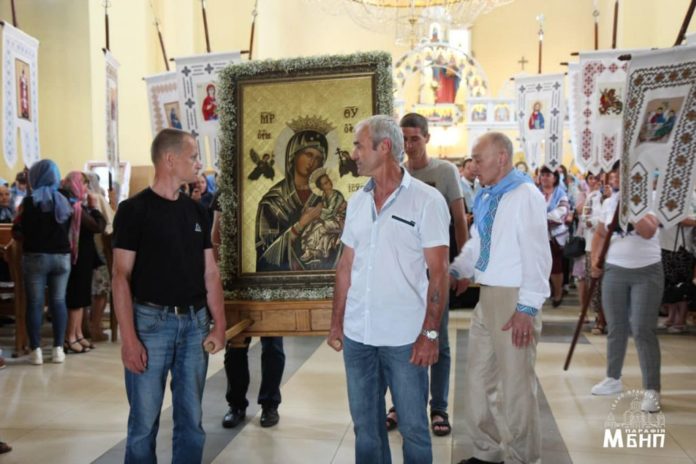 In September 2017, Synod of the bishops of the Ukrainian Greek-Catholic Church considered the request received from Ukrainian Redemptorists to add the Feast of Our Lady of Perpetual Help to the liturgical calendar. Then His Beatitude Svyatoslav, Head of the UGCC, announced the annual сelebration of the feast to be held on the first Sunday of July.

One of the events which is organized every year before the feast is a congress of the Arch-confraternity. This year, due to the quarantine restrictions, three local gatherings were separately held in the Western region of Ukraine – On the 27th of June in Ternopil and Ivano-Frankivsk, and on the 3rd of July in Hnizdychiv, Lviv region.

We would like to highlight that this year we celebrate the 150th anniversary of the foundation of the confraternity in Italy and the 100th anniversary of its foundation in Ukraine. The Lviv Province of the Redemptorists supports this movement of lay people. It was very active throughout the times of persecution of the Ukrainian Greek-Catholic Church. The confraternity members allowed priests to use their private apartments for religious services and followed them from one place to another to provide more safety. They would also spread some religious and other important information.

The redemptorist bishop Blessed Vasyl Velychkovsky used to say «Mary’s child will never die”. These words are especially true for the confraternity members, as they have publicly dedicated themselves to the Virgin Mary. Through this act of dedication and by following Mary’s example, they try to follow the Word of God, especially by serving those in need.

Fr. Ivan Levytskyy, C.Ss.R.
Lviv Province of the Congregation of the Most Holy Redeemer