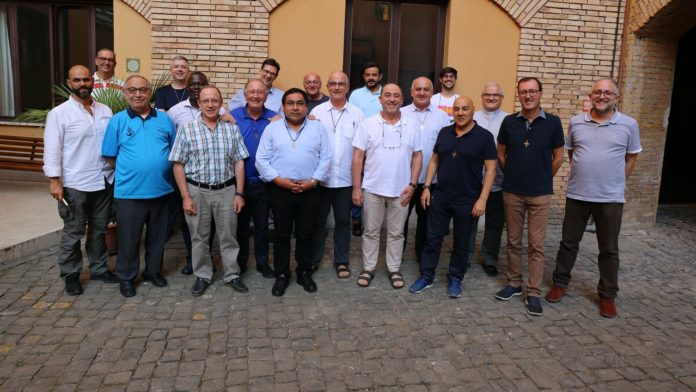 The Ordinary Councils of five Provinces, which make up the area known as Europa Sud, met for the first time in their presence in almost two years (Paris summer 2019) in Rome to continue the programme of moving towards the formation of a single Province. The Assembly took place at the Generalate in Via Merulana in Rome on 1 and 2 October.

In addition to the Ordinary Councils, the Superior General, Fr Michael Brehl, the CRE Coordinator, Johannes Römelt, and the General Councillors, Alberto Eseverri and Pedro Lopez took part in the meetings full time. The first part of the work involved reports from the three areas of collaboration (Formation, Evangelisation and Economy). From the discussion that followed in the three areas of collaboration, it emerged that for Evangelisation, there is a need to define and bring out, even more, our missionary identity in Southern Europe in the light of the CRE Apostolic Plan, giving life to a joint missionary project, to be carried out with the collaboration of the five Units.

Regarding Formation, the participants stressed the urgency of designating new formators, that they will be well prepared in consideration of the challenges of the changing times. It was said there is a need to evaluate existing structures and design joint structures for the formation, while the postulancy phase should be organized in the Unit of origin.

Concerning the economy, despite the legislative differences in the various countries (in France, for example, there are three different legislative frameworks on a regional basis), we are thinking of developing a standard accounting model with the help of brothers trained in this area. Its aim will be to give a Christian and apostolic directive to the lay experts, that will collaborate in the management of our patrimony. This patrimony is not only monetary, but also historical, and the fruit of the work of generations of confreres. Rather than unifying finances, the idea is to set up a possible common fund for pastoral and charitable needs.

With a view to creating a new Unit, they reiterated the steps to be followed while commissions will draw up draft Statutes, that will be offered for a consultation to the various Assemblies, Provincial Chapters, Visits to communities and other occasions.

The next meeting of the five Ordinary Councils is planned for 10-11 May 2022 in Trois Epis, France.