The Covid-19 pandemic has touched the agenda of people and institutions around the world. Even in Africa… But it didn’t leave us paralyzed. It made us look for other paths, take new approaches.

For many years, the Vice-Province of Luanda (Angola) sent its novices to Sister Units in Africa: first to  DR Congo, then to Burkina Faso and, when the security situation here became dangerous, to Madagascar. When the pandemic peaked in 2020, and the international flights stopped, we had to decide regarding young candidates for the Novitiate in Angola. The Redemptorist Mission of Mozambique was also looking for a location to send its candidates to the same formative stage. That’s why we started to dream together about the possibility of carrying out the joint project in dialogue with the coordination of the Redemptorist Conference of Africa and Madagascar (COREAM).

In the Congregation-wide reconfiguration project, Mozambique and Angola conform to the ‘Lusophone Region’ of the future Central-Southern Province of Africa. The novitiate, therefore, appeared to us as a concrete opportunity to start taking some steps together in view of that Region. After we had concluded a tiring journey of discernment to choose the place and formators, we asked the General Government to erect the ‘temporal’ Novitiate in Angola. By the decree that we received, the novitiate has been created in our Blessed Gaspar Stangassinger community, near the town of Humpata, province of Huila (southern Angola), which, until 2009, had already served the same purpose. In order to make the novitiate spaces more habitable and welcoming, the Vice-Province had to invest some of its few resources.

Six young Angolans (Abraão Lussasse, Adelino Bento, Avelino Ezequiel, Inocêncio Kapitango and João Segunda) and two Mozambicans (Isac Suaterra and Jaime Novela) have come together for the adventure to deepen listening to the Spirit who calls them to follow the Redeemer, to serve the “Copiosa Redemptio” of the abandoned, especially the poor. In this path of discernment, they have the help of Fr. Ilidio Vieira (novice master) and Paulino Cambungo (socius) and the whole of the Redemptorist community. The novitiate was inaugurated on September 8, in an evening Eucharist presided over by the Superior Vice-provincial, in the church of Saint Isidro, in Palanca (near Humpata), a predominantly rural parish, served by the Redemptorists for several years.

In the days in which I am writing this chronicle, the novitiate had the great joy of the visit of the General Consultors Frs. Rogério Gomes and Nicolas Ayouba (as seen in some photos) who since November 5 were doing the canonical visit to the Vice-Province. It was a moment of great encouragement after the fact that the novice master and another confrere were involved in a car accident a week before. Thanks be to God, they are recovering well.

We are still very grateful to the sister Unit, Vice-Province West Africa for the help in this extraordinary situation. They “lent” us Fr. Ilidio, who would leave for Burkina to serve as a formator. 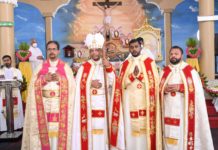 Kerala: Ordination and blessing of the new house 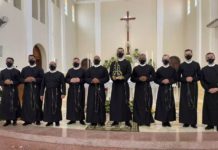 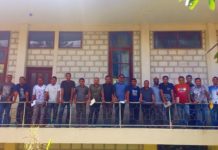