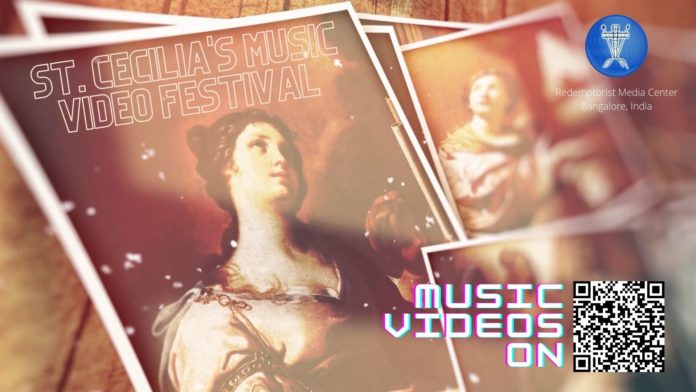 (Bangalore, INDIA) On November 22nd, the Church celebrates the feast of St. Cecilia. She is said to be one of the most famous of the Roman martyrs. As the story goes, despite her vow of virginity, she was forced by her parents to marry a pagan nobleman named Valerian. During the wedding, Cecilia sat apart singing to God in her heart. Valerian respected her vow and did not force himself on her. Her witness to the faith eventually led him to become a Christian. Cecilia died a martyr after her husband, Valerian. She was later declared the patron saint of musicians.

In honor of this great 3rd-century witness to the Gospel, the Redemptorist Media Center (RMC) India planned and organized a Christian Music Video Festival and sought registrations from the public. To our great delight, we received 26 submissions by our set deadline! Many of these music videos are of good quality and some of them even have a professional quality! Our editing team packaged these videos to suit the occasion and premiered the 26 videos on our YouTube channel on 10th November 2021. —- We want you to enjoy the wonderful original compositions and also help us to pick the best to for the RMC’s St. Cecilia music video festival Award 2021.

The link to the playlist is here: St Cecilia Music Festival 2021

The Christian Music Video Festival would come to a climax on the Feast of St. Cecilia. We plan to award those videos which demonstrate artistic excellence, spiritual depth, and popular acclaim. So, we want you to help us award the most inspiring and excellent productions among the submissions by liking, commenting on, and sharing the links with family and friends on your WhatsApp, Facebook and Instagram, and other social media platforms for the ten days leading up to the feast. You can do so too by scanning the QR code and accessing our playlist for the Music Festival! The winners of the special awards of note will be announced on the morning of November 22nd after the Feast Day Mass of St. Cecilia on RMC YouTube channel at 0700 A.M. IST.