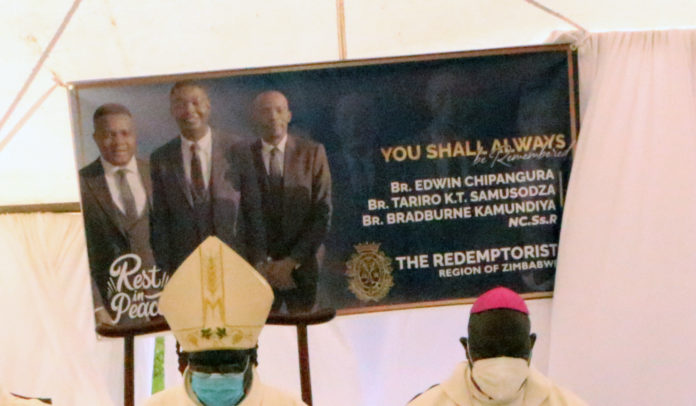 On Christmas Day 2021, our Heavenly Father called all three Novices of the Redemptorist Region of Zimbabwe back home. They were called through a fatal road accident. Fr. Victor Bushu, C.Ss.R, who was their socius and accompanying them is recovering well from bodily pain and injuries sustained in the accident. The Novices share their heavenly birthday into eternal glory with the marked day of the earthly birthday of Our Lord and Redeemer Jesus Christ. It calls to mind the priestly prayer said during the Eucharist as the priest pours water into wine, “By the mystery of this water and wine, may we come to share in Christ’s Divinity who humbled himself to share in our humanity.”

The three, Novice +Bradben Kamundiya, C.Ss.R, Novice +Edwin Dadiso Chipangura, C.Ss.R and Novice +Tariro Keith Thulani Samusodza, C.Ss.R, were laid to rest on Wednesday the 29th of December 2021. The Requiem Mass was graced by the presence of the Nuncio to Zimbabwe, Archbishop Paolo Rudelli, the Archbishop of Harare, Archbishop Robert Christopher Ndlovu, the Bishop of Gweru Diocese and the Administrator of Gokwe Diocese, Bishop Rudolf Nyandoro, and the Bishop of Chinhoyi, Bishop Raymond T. Mupandasekwa C.Ss.R together with many Major Religious superiors, Priests, Religious Sisters, Redemptorist Lay Partners in Mission, the parishioners from our parishes and relatives and friends of the deceased brothers. The main celebrant of the Eucharist was the Archbishop of Harare and our confrere; Bishop Mupandasekwa broke the Word with words of hope and encouragement.

Such words of consolation and solidarity received are helping the Region in changing the way of looking at the incident. Indeed, if one changes the way they look at their circumstances, their circumstances change. In pursuit of changing the way of looking at the fatal accident, one cannot help but wonder why at Christmas. We will never know the full answer, but pointers around us take us to the Christmas Octave. The Church teaches us that days of the octave carry the same liturgical weight as the solemnity they celebrate. Within the Christmas Octave, we celebrate already the feast day of the first Christian Martyr on the 26th of December, St. Stephen. And the Region of Zimbabwe celebrates the life of their first members to be promoted to heavenly glory. On the 28th of December, the Church celebrates the feast day of the Holy Innocents. The male children under the age of two years were killed by King Herod when he noticed that the Magi were not coming to report back on the whereabouts of the newly born King, Jesus. The feast day of the Holy Innocents is also the feast day of Novices, “the Holy Innocents” of Consecrated Life. Of Divine providence and grace, on the 24th of December, the Novices had a half-day of recollection after which they went for their confessions. Indeed, they left us “novices”, read as “no-vices”. One wonders are all these coincidences or God-incidents. I choose the latter. These two feasts’ days in the Christmas Octave bring to the fore, the truth that the cost of following Christ, even in his infancy, is death and total self-giving.

We commend our three Novices to the Mercy of Our Lord and Redeemer, Jesus Christ who is full of mercy and compassion, and to the prayers of Our Lady of Perpetual Help, whose help never fails us.