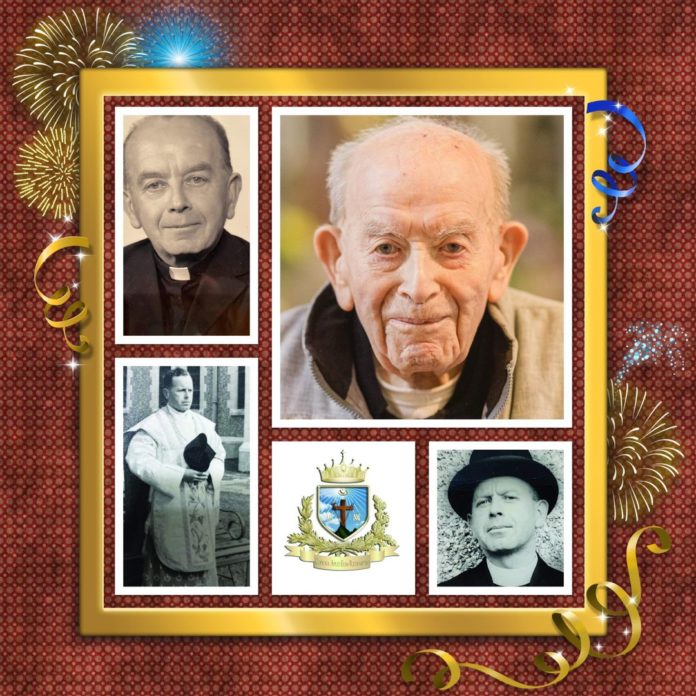 Born in the same year as the Irish Free State, Fr Tony Mulvey is the first Irish Redemptorist to reach 100 years of age. It happened last Sunday, January 30, 2022. But achieving this milestone doesn’t mean he has retired, he says. “There’s no retirement for Redemptorists. The only place you retire is into the box when you’re carried down to the cemetery!”

Fr Tony’s journey with the Redemptorists started in 1937 when, as a teenager, he was so impressed by a mission they gave in his home parish of Ballinaglera, Co Leitrim that he entered the Redemptorist junior seminary in Limerick. “I got a great education in Limerick in art and music,” he says. “I went twice to the Prado, a famous art gallery in Madrid, and that’s something I wouldn’t have dreamt of doing were it not for the training I got in Limerick. And I can spend hours now listening to good music; we had Beethoven’s 5th Symphony nearly off by heart from hearing it.”

After completing his secondary education in Limerick, Tony entered the Redemptorist novitiate in Dundalk in 1942. He then moved on to study in Cluain Mhuire in Galway and was delighted to be allowed to travel to Belgium as part of his studies. It was shortly after the second world war, and conditions were harsh. He says the year in Belgium was the best decision he ever made. “It was good for me because I learned how different Europe is. I had a foothold in the continent, and as a result, I visited many places around Europe I would never have seen if I was a secular priest.”

After ordination, Fr Tony returned to Limerick to teach French in the Redemptorist College. “I was also very keen on Irish and used to go to places where Irish was spoken. I went down to Kerry, near Dunquin, and to the Aran Islands and Spiddal. Two of us took charge of a parish in Carraroe, all in Irish. I’m still very keen on the Irish language and love to get a chance to speak it.”

After Ireland entered into the EEC in 1973, Fr Tony was assigned to Luxembourg to minister to the growing number of English-speakers who had moved to the city to work in the European institutions. He spent 12 years there. “I had 25 nationalities in my section of the parish,” he recalls. “A lot of people came to the English Mass to learn English.” He also taught religion in the European school for children whose parents worked in the institutions.

He got to know many politicians during his time there. “Cearbhall Ó Dálaigh was my parishioner, and in fact the night before he left for Ireland for his inauguration as president, we prepared his presidential speech together. He was very keen on Irish, and so I was often at his house, and we were personal friends.”

In 1987, Fr Tony was summoned to Rome to work as a translator in the Redemptorist general house, where he remained for 24 years. He describes that time as “a marvellous experience. I would love to go back to it, but as I grew older, the heat was too much for me!” After returning from Rome, Fr Tony was stationed in Dundalk for some years before moving to Esker in Co Galway in 2016, where he currently resides. But he misses Rome. “I have always loved mixing with other nationalities and getting the history of their country. What’s written on paper is hardly ever the truth, but when you get speaking to somebody from the country, they’ll give you the real story.”

Meeting of Confreres aged 55 and Under in Mexico