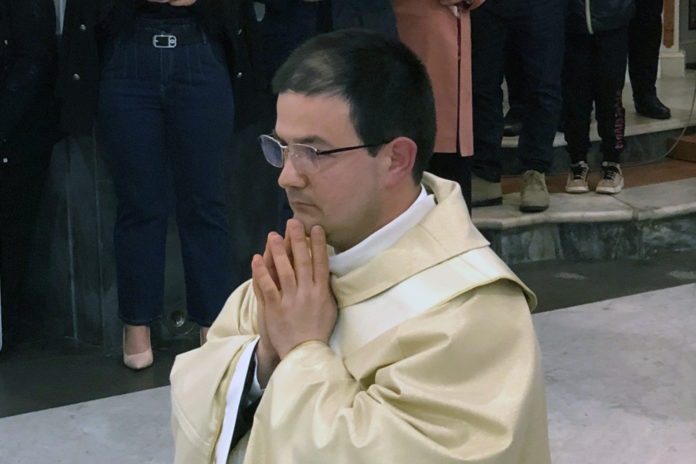 (Naples, Italy) There was the ordination of a new priest in the Church of the Holy Trinity. on Saturday 7th of May in Ciorani, in the Province of Naples. A rather particular story is that of Gerardo Giordano. A story that has its turning point at the age of 23. Up to that moment, Gerardo was quite inserted in the world of work, he worked as a pastry chef in his hometown of Nocera Inferiors. One day he decided to visit a Basilica he had heard about, that of Saint Alphonsus in Pagani. That visit, accompanied by confession and then by a meeting with a Redemptorist, was like a call from the Spirit.

After Saint Alphonsus it was the turn of Saint Gerard, whose story fascinated the pastry chef apprentice. He thought of becoming like him, a Coadjutor Brother. He made his first profession on September 7, 2002, and after three years the perpetual one. His first formation was in Materdomini, a stage that allowed him to deepen even better the spirituality and fascination that Maiella exercises in the people of God, starting with the poor and the simple.

The day came when Gerardo was transferred to Sicily: here, in Palermo, in the district of Uditore, he was still able to be a “brother”, in service, in meeting people, in charity. But he tried a new path: that of attending the Theological Faculty of Sicily for a philosophical and theological five-year period. The interest in knowledge was born, the interest became a passion, and the study ended with the title of bachelor.

After eight years in Palermo, Gerardo returned to Materdomini, Saint Gerard was ready to welcome him again. Meanwhile, being his Brother made the Superiors insert him into the life of the Congregation envisaged for this state of life. Gerardo entered the Secretariat for the Brothers and also participated in the General Chapter in Thailand.

But the Spirit had not allowed working. At one point Gerardo felt the call to become an ordained minister. He was facing a crossroads. It was not an easy choice, nor something that happens every day. To provoke it there was not only the need for priests and confessors, which occurs too often in shrines such as Materdomini. It was something deeper. He talked about it with his Provincial. He also spoke with the spiritual director and with other confreres. The Provincial Government invited him to wait and take his time.

When Gerardo matured the inner security of the call, he applied for admission to the diaconate. The celebration took place in Materdomini on November 9, 2019: just a few months before Covid imposed other times on the program made by human beings. A prolonged period of discernment was already foreseen, that time has extended by more than two years. The fact is that a considerable crowd of confreres and friends crowned Gerardo on Saturday 7 May, as he received the gift of the Holy Spirit through the hands of the Bishop and other priests. A crowd that made him feel the warmth of the family, considering that his mother had already flown to heaven fifteen years ago, and his father was absent from the celebration due to orthopaedic problems.

A singular story, that of Gerardo, whom everyone calls Gerardino. We could say: from Brother to Father. But also “from pastry chef to priest”, with the mission of building joy and love through the breaking of bread and the announcement of the One whom the Christian spiritual tradition calls “the sweetest Jesus”.