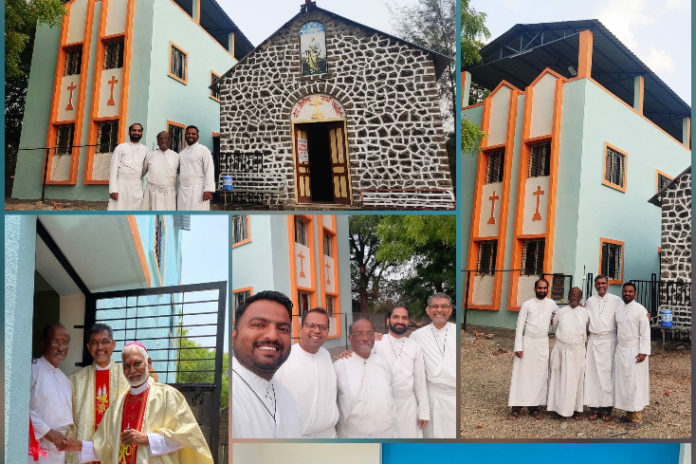 (India) On Sunday the 8th of May the Rt Rev. Lourdes Daniel, Bishop of Nashik Diocese in Maharashtra Celebrated the Eucharist and Blessed the newly constructed Community Residence named “Clement Nivas” at St Joseph the Worker Church in Panodi Maharashtra.

The Redemptorists of the V. Province of Majella came to reside at Panodi which was a substation of a large parish run by the Capuchins n the Diocese of Nashik in 2017. In 2019 the parish dedicated to St. Joseph the worker was erected on the feast of Bl Sarnelli and then handed over to the Redemptorists with 10 villages for their pastoral care. The People are one of the most abandoned groups belonging to a backward caste who have suffered years of discrimination and having embraced Christianity in the 1900s are still struggling with a variety of issues which include drought, famine, lack of education facilities, illiteracy and so many migrate to the urban areas resulting in further issues that emerge.

The Redemptorists have been living in very sparse and simple conditions for the last 3 years and facing a lot of hardships. The time was right to construct a residence for the community. The plans were laid out and approved and the construction began at the end of September 2021. The building which has rooms for a community of 4 confreres and a guest room together with a dining room and kitchen, a community room, and a chapel with an open-air terrace hall for the meeting was completed in record time despite the challenge of covid-19.

The Parish celebrated the parish feast of St. Joseph the Worker on the 8th of May and had the blessing of the newly constructed Community Residence named after St. Clement (Clement Nivas) as we envisage a perpetual mission here in the style of St. Clement constantly reaching out to the poorest of the poor through preaching, education facilities, conservation of water and ecofriendly projects, tuition classes for tribal children and the pastoral care of the 10 villages which have about 200 families in total. At Present, there are 3 confreres appointed to the community, Fr Neville Fernandes, Fr Jerry Fernandes, and Fr Savio Fernandes.

Shortly a young student will join them for his Regency/Immersion experience. With this newly constructed residence ‘Clement Nivas’ the mission of the Redemptorists of the V. Province for the abandoned gets strengthened and more confreres can be added to the community so that the wounded in need of the Good News of Redemption in one of the most backward areas of the State and diocese will be served.