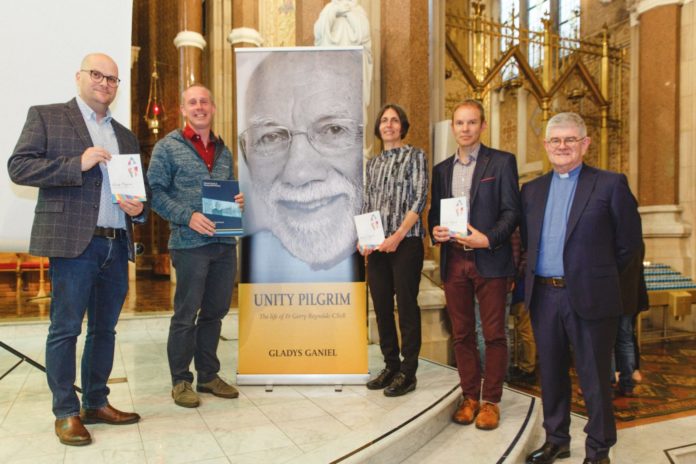 The resources are a booklet for use with school retreats and youth groups; a booklet for parishes and congregations who wish to embark on ‘Unity Pilgrim’-style initiatives; and videos exploring the life and peace witness of Clonard’s Fr Gerry Reynolds (d. 2015) and Fr Alec Reid (d. 2013).

The new resources seek to raise awareness of Reynolds’s and Reid’s non-violent work for peace, to emphasize the continued importance of faith-based peacebuilding, and to encourage contemporary inter-church activism.

The resources are inspired by the book Unity Pilgrim: The Life of Fr Gerry Reynolds CSsR, written by Gladys Ganiel, a sociologist at Queen’s University Belfast. They were produced after focus group consultations with young people, youth ministers, and people who have been active in inter-church peacebuilding. The project has been supported by a Queen’s University impact grant, funded by the Economic and Social Research Council (UK).

The resource for school retreats and youth groups will be used by Clonard Youth Ministry, which each year organizes retreats for up to 2500 young people from schools across Northern Ireland. Clonard Youth Ministry also has regular, direct contact with about 40 young people in its own youth group. The resource is suitable for use with other youth groups, and includes separate material appropriate for children at Key Stage 2, Key Stage 3, Key Stage 4, and Young Adults (17+).

Brendan Dineen, director of Clonard Youth Ministry, said: ‘It is our hope that young people will be inspired by the example of Fr Gerry and Fr Alec, who worked patiently and creatively for peace in a violent and divided society. We want these resources to empower young people to draw on their faith to respond to the contemporary challenges of peacebuilding and building better community relationships.’

The resource for parishes and congregations is titled, ‘Unity Pilgrims: What does it Mean to Practice Christian Unity?’ During his life, Reynolds pioneered the Unity Pilgrims, a group of Catholics who regularly visit services of other Christian denominations. The resource aims to encourage other groups of Christians – Catholic and Protestant – to adopt the practice of regularly visiting other faith communities. It covers topics such as: ‘what is meant by unity?’, ‘why do some Christians choose to visit other congregations?’, ‘what are the effects of visiting other congregations?’, how to prepare for visits, the role of prayer, and more.

Ed Petersen, Coordinator of Clonard Peace Ministry, said: ‘Communities in Northern Ireland remain divided along religious lines. Public discourses have become increasingly polarized. We know from our experience during the Troubles that people who participated in ecumenical activities often experienced changes in which their identities became more open and inclusive, resulting in better community relations. Fr Gerry was an activist, and we hope this resource will prompt others to continue to work for unity in our still-divided society.’