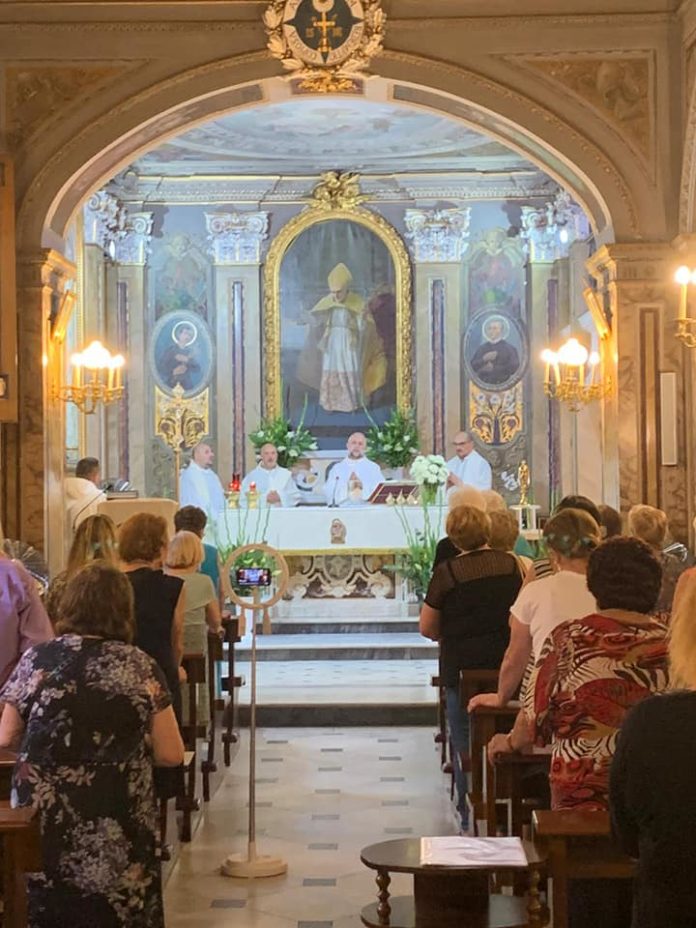 On the occasion of the 260th anniversary of the episcopal ordination of Saint Alphonsus (1762-2022), the small Redemptorist community that guards the house where he was born and the Alphonsian Museum in Marianella, on the outskirts of Naples, once again organised solemn celebrations in honour of the holy Founder.

The celebrations were held in the chapel of the house where Saint Alphonsus was born on 29th July – 1st August 2022.

The solemnity was preceded by a Triduum, preached by the specially invited historian Fr Vincenzo La Mendola, during which the community was invited to reflect on the following themes: 29th July: St Alphonsus Bishop of the Church and of the Poor; 30th July: St Alphonsus Theologian of Love and Mercy; 31st July: St Alphonsus Doctor of Prayer. In his homilies, the preacher paused to describe aspects of the life and mission of St Alphonsus with timely historical information, quotations from the Trials, biographies and writings of the saint, arousing the interest of those present and presenting the thought of the saintly doctor in his notes on current, ecclesial and cultural issues. Fr. Vincenzo, an expert on the history of the Congregation and Alfonsian works, broke down the saint’s thoughts to the people of God with the simplicity of word and great passion, making it accessible and interesting and stimulating the curiosity of those who wish to approach the writings of the Neapolitan saint.

The celebrations were preceded by the prayer of the Rosary, the Chaplet and the supplication to the saint, followed by the Hymn, sung with devotion by the numerous faithful. For the occasion, a distinguished relic of the saint was displayed next to the altar, which the faithful were able to venerate. The celebrations were enlivened with singing and organ playing by Antonio Delli Priscoli.

The first day of the triduum was attended by the Parish of St Alphonsus Maria de Liguori and St Gerard Maiella from Miano (NA), the first and only one with the double title. The parish priest Don Salvatore Cinque, originally from Marianella, a permanent deacon and a large group of faithful cheered the celebration and visited the museum, showing their devotion to the saint and their deep sense of friendship with the Redemptorists.

On 1st August, the Solemnity of the Founder Saint, already at 7.00 a.m., after a festive firing of firecrackers, the chapel was opened to visitors and the faithful, who in groups attended the morning Holy Masses (8.30 a.m. – presided over by Fr Antonio d’Alise, deputy parish priest of the Marianella Parish, and 10.00 a.m. – by Fr La Mendola).

Before and after the Holy Masses in orderly groups, numerous people visited St Alphonsus’ rooms, where the small museum of his birthplace is kept. The Fathers and lay people collaborated by serving as hosts and guides. Several women religious communities visited Marianella to honour St Alphonsus. Among these, the most numerous were the Missionaries of Charity of St Teresa of Calcutta and the Sisters Disciples of Jesus in the Eucharist from the Chiaiano formation house. Lay faithful from different parts of the city honoured the saint with a visit and a prayer. On various days, several faithful approached the sacrament of confession and asked for a special blessing for their needs with the intercession of St Alphonsus.

The concluding celebration at 18.00 hours was presided over by Monsignor Antonio De Luca, Bishop of Teggiano Policastro, accompanied by Fr Enzo Rispi. The presence of Fr. Antonio, as he prefers to be called by his friends and confreres, was an event of grace for the community, which was able to listen to a profound homily from his words, in which he presented the figure of the holy doctor starting from his humanity, ecclesiology and his theological and pastoral genius. St Alphonsus is a saint of the Church and of humanity itself since, through his work, he contributed to the renewal of Catholic piety and morality and reawakened values of solidarity, equality and care for the poorest and most abandoned.

The celebration was attended as concelebrant by the Marianella parish priest Fr Antonio Salzano and concelebrated by the house fathers and the preacher.

Marianella, the only Redemptorist community in the city of Naples, also celebrated the most Neapolitan of saints and the holiest of Neapolitans, invoking his protection on the Neapolitan Church and on the whole of Campania, an Alphonsian land and breeding ground of saints, which in the shadow and example of Saint Alphonsus continues to bear abundant fruits of evangelisation and charity even today.