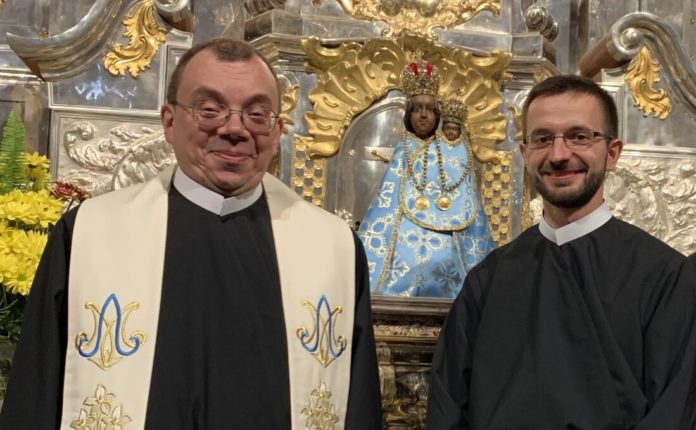 Father Jan Kuník CSSR and Brother Lukáš Michalovič CSSR made vows of chastity, poverty and obedience to the Provincial of the Congregation of the Most Holy Redeemer, Father Václav Hypius CSSR on the feast day of the Assumption of the Virgin Mary in the Church of the Heart of Jesus in the Kramár in Bratislava.

Lukáš Michalovič, a native of Prievidza in the Archdiocese of Banskobystrica, began his formation in the Redemptorist order in 2016. He took his temporary vows of chastity, poverty and obedience on August 15, 2019 after his novitiate in Lubaszowa, Poland. After completing his three-year and fourth-year studies at the Trnava University Faculty of Theology (TF TU), he studied at the Pontifical Lateran University in Rome. In the following academic year he continued his master’s studies in theology and philosophy at TF TU in the 5th year.

Jan Kuník comes from Písek in the diocese of České Budějovice and received priestly ordination in 1995. Until 2016 he worked as a diocesan priest in the parishes of Tábor, Chotoviny and Rožmitál under Třemšín, before beginning his formation in the Redemptorist order. After his novitiate in Lubaszowa, Poland, he made his temporary vows of chastity, poverty and obedience on August 15, 2019. He currently works in the Redemptorist community of Svatá Hora.

We commend them to your prayers!