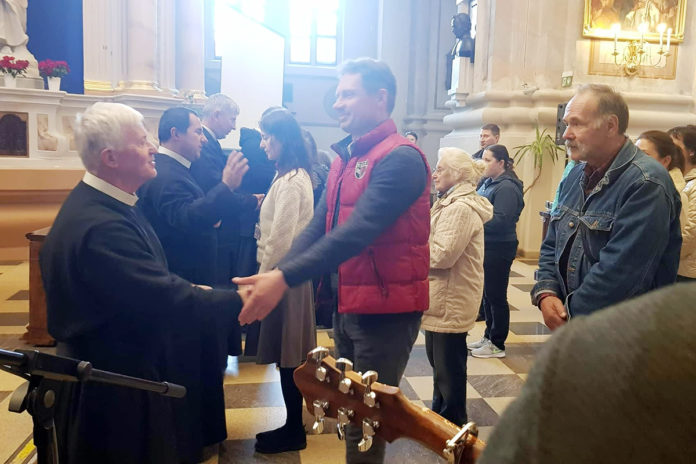 From May 28th to June 5th, 2022, the first parish mission, led by the Redemptorist Fathers of the Praha-Bratislava Province, took place in Kaunas Cathedral in Lithuania. The theme for this first parish mission was taken from Revelations 2: ‘I have seen a new city whose light is the Lamb.’  We were inspired by the fact that Kaunas is the cultural capital of Europe this year. We felt that now, as the city of Kaunas is being renovated all around us, there would be a spiritual renewal at the same time as the physical one.

The first parish missions were originally going to happen in the biggest parish of the diocese of Kayšiadorys,  Elektrėnai. However, they had to be postponed. The first time it was because of the pandemic, and the second time because of the consequences of the war in Ukraine. The premises of the parish of Elektrėnai, where the mission team was going to live, are now inhabited by refugees from Ukraine. We, therefore, agreed with the local parish priest to postpone them once again. In Elektrėnai we have already had pre-mission sermons and a meeting with the laity, who wanted to be involved in the preparation of the missions. Plans and preparations have been made so that they can take place at the end of April 2023.

We did our best to prepare well for the missions in the Cathedral by regular prayer in the community and by preparing the mission team of Partners in Mission. Two weeks before the missions, the participants of the Archdiocesan Mission School participated in a formation weekend in Podolínec, Slovakia, which was led by the mission community Rieka života (in English, The River of Life, whose leader represented Conference Europe at the last General Chapter in Rome). The highlight of this time was group prayer on the first Sunday of the month. For many, it was the time in Podolínec that was a breakthrough in terms of perspective on the mission. We experienced a new zeal for the things of God.

Before the missions, we inserted petitions for the parish missions in the prayers of the faithful. During the pandemic, Fr. Peter Hertel and others gradually translated the mission lectionary and missal itself into Lithuanian. We also invited various smaller prayer groups working at the Cathedral to pray for the missions. Two members of the community were in charge of the call to intercessory prayer, inviting various religious orders and communities to participate in interceding for the City of Kaunas and the mission. On the Sunday before the mission, Fr. Peter Hertel also preached a sermon at the Cathedral bringing together key points from the two different pre-mission sermons. We were able to produce part of a radio show about these missions for Radio Maria, which we have in our neighbourhood. Our host was Edita Grudzinskaitė, a member of the Mission School and someone skilled in working with the media. With the help of our friends, we translated a prayer booklet with meditations, litanies, and a novena to Our Lady of Perpetual Help. In one booklet, we put the basic texts of our two booklets, by George Wadding, Michal Zamkovský and Ľudovít Michalovi. There was a historic moment when this novena was prayed in Lithuanian for the first time during the missions.

The missions began with the Vigil Mass of the Ascension of the Lord and ended on Pentecost Sunday, the Sending of the Holy Spirit. The end of May and June is also the time of Ordinations, First Communions, and the Sacrament of Confirmation, so one ordination to the diaconate and two confirmations also took place during the mission.

The sermons were preached by Fathers Peter Hertel, Michal Zamkovský, Václav Hypius and Rastislav Dluhý. During the morning celebration of the Eucharist, Fr. Michal greeted and encouraged all present before the final blessing. He also gave the people attending morning Mass some special homework: to pray a psalm that underlined the topic of the sermon. We celebrated the Liturgy of the Eucharist daily, strengthened by the prayers and fraternal communion of Father Patrik Grotkovský, rector of our Bratislava house and Father Ján Andrejov, Provincial Secretary. In this way, as a community, we were able to show something of our common life, friendship, and mission. The members of the Mission School from Kaunas, Lithuania, and the members of the Slovak community, Rieka života, joined in the singing of the Mass.

We tried to arrange the program, sermon themes and all the additional meetings that take place after the evening celebration of the Eucharist according to the model that has proved to be so effective in Slovakia over the years. The attendance of participants at the mission gradually increased despite the fact that normally the attendance at Mass at the Cathedral is fairly low. There was an atmosphere of faith and anticipation in the air. We had also a Mass for Children, our first ever in Lithuania. It was raining heavily in Kaunas that day. The mass was celebrated by Fr. Peter Hertel. Some of the songs for children that we sing in Slovakia are the same as in Lithuania (such as God is not dead and Cast your cares on the Lord). Before the missions, we learned some children’s action songs. During the missions, we also used our new translations of the praise and worship songs that are sung in our country (such as Everlasting God and Through and through). We are happy that the first translation of the Slovak worship song Worthy You are (Hoden si) is already being sung in Lithuania. Regina Sabonyte, an expert in the Lithuanian language with a flair for poetic lyrics, who also proofread our brochure about Our Lady of Perpetual Help, is doing all the translations for us. Regina Sabonyte, a language scholar, was our first Lithuanian teacher during her first semester at the University of Vytautas the Great, where she researched some areas of the Lithuanian language and received her doctorate on October 3rd, 2022.

Before and during the missions, information about upcoming and ongoing missions was provided by Milita, a member of our community, who provided daily updates about the missions through short Facebook statuses and articles with photos on the Archdiocese’s main website. Fr. Peter Hertel made three backdrops for photo-shooting, which were then painted by the young artists. The photo booths stood outside the cathedral during the missions and people were able to take pictures there. The photos bore inscriptions: I am a son of God/I am a daughter of God/This is the new city where God dwells. There was also a stand near the cathedral where members of the Mission School took turns inviting people to the missions.

11-members of the Rieka života community participated in the missions. Together with members of the Kaunas Mission School, they went to schools throughout the week. There was also one program for the homeless and one for prisoners. We had 17 different events in six schools. Some of the larger programs, with about 100 students attending, were held in the Archbishop’s Hall. For all the members of the Mission School from Lithuania who went with the River of Life, Father Peter, and Father Rastislav to the schools, it was the first time they had ever acted out a skit or given testimony. In addition to the public mission program, there were several formation sessions for the members of the Mission School. The formation programs were led by Father Michal and Rieka života. There was also a meeting with the teachers of one school and with the staff of the church institutions, with talks by Father Michal, Father Václav and Bohumír Živčák.

Father Provincial also had the opportunity to meet with the Archbishop. Archbishop Kęstutis Kėvalas dined with all of us several times and celebrated one Mass at which Father Michal spoke about the Eucharist.

For the local community in Kaunas, the presence of the Fathers from Bratislava and Podolínec was a great gift. They brought us new strength and joy. Our community was learning again from these experienced missionaries. The presence, sacrificial and joyful service of our partners from Rieka života were also invaluable gifts.

As we do during the missions in Slovakia, we also offered the magazine Word Among Us and religious literature to the people. We got the literature from a Catholic publishing company’s discount sale. We also have several titles offered by our publishing house, Redemptoristi – Slovo medzi nami (Redemptorists – The Word Among Us).

On the Vigil of Pentecost Sunday, in which Cardinal Sigitas Tamkevicius conferred the Sacrament of Confirmation, we had a prayer of invocation of the Holy Spirit and a time of praise after the evening Mass.

The final Mass, with a focus on the Cross, was celebrated by Father Peter Hertel. In the end, the renovated cross of the Catholic organization Ateitininkai (that translates as something like ‘People of the Future’) was consecrated. This made it the missionary cross of the parish. Finally, the Vicar General and Parish Priest of the Cathedral, Evaldas Vitulskis, who became parish priest of St. Anthony’s Parish on September 1st, expressed thanks to all missionaries.

This October we shall begin an open mission in connection with the new religious order, the Community of Tiberiada. The mission will start on the 17th of October and will last for a week.