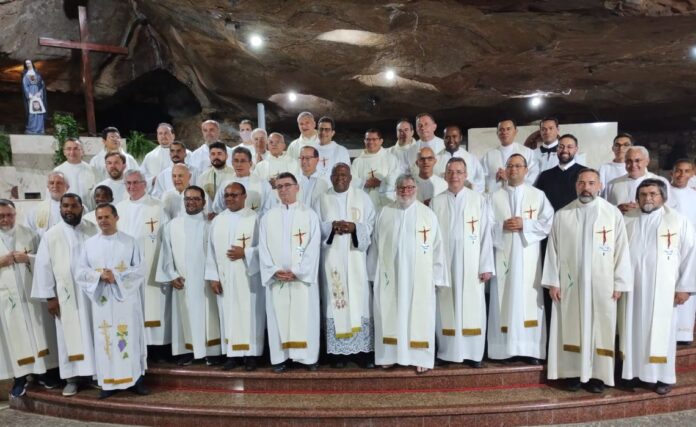 In February 2022, 50 years have passed since the arrival of the Redemptorists from Poland to Brazil, originally to the port of Santos, and after preparation in Sao Paulo in the fall of 1972, to the sanctuary of Bom Jesus da Lapa in the state of Bahia, where the mission of Polish Redemptorists in this country began, which then became the Vice Province of Bahia 30 years ago. On November 7-9, 2022, a solemn celebration of this beautiful jubilee took place there, in which the superior of the home Province of the Warsaw Redemptorists, Father Janusz Sok, CSsR, also took part.

Today, this missionary unit of the Province of Warsaw is on the way to uniting with other Brazilian provinces, but we remember the Pioneers, asking that their Successors, together with the formed Redemptorists of Bahia, continue to zealously preach abundant Redemption to the poor and abandoned.

In 1971, a discussion arose in the Polish province about whether to establish a new mission or to strengthen the already existing works. However, the Provincial Chapter decided that the new mission would be accepted. Stanisław Stańczyk CSsR, then Provincial Superior, turned to the confreres of the Province, looking for candidates. The answer was surprising, because nearly twenty, i.e. about 10% of Polish Redemptorists volunteered, which was an eloquent testimony to the missionary spirit that enlivened the Polish province at that time.

On Friday, February 11, 1972, Fathers Łukasz Kocik (then aged 40), Franciszek Deluga (37), Tadeusz Mazurkiewicz (32), and Józef Danieluk (30) in Santos disembarked from the Italian ship “Augustus” to Brazilian land. On land, they were met by Fr. Henryk Smólski (he knew Portuguese, so at the beginning, he helped the newcomers to communicate with the Brazilians) and several confreres from the Province of Sao Paolo. A few months later, Fr. Czesław Stanula (aged 30) joined the missionary team. He had been working on the South American continent since 1966 (Argentina, Resistencia Vice-Province). His task was to coordinate the work of the new missionaries. After linguistic preparation in Sao Paulo, they came to Bom Jesus da Lapa.

When the first missionaries were still in the waters of the Atlantic, Father Wacław Pilarczyk, a missionary from Argentina, wrote a letter to them:  Dear friends, I cordially welcome you to the Land of the Holy Cross, to the Land of the Southern Cross. We are convinced that you will not undo your sacrifice and your will and you will not regret coming. The first moments will be unpleasant and difficult. You have to go through a mystical death. You must be determined, love the people for whom you are to work, and want to help them. … become Brazilians for Brazilians.

These events stand at the beginning of a noble history. In the following years, the sanctuary of Bom Jesus da Lapa became more beautiful, the number of pilgrims increased, new institutions were established, and the ranks were joined by Brazilian confreres. Finally, 30 years ago, the former Regia Bahia was declared a Vice Province.

The missionaries who stood at the origin of this story are slowly passing away to their eternal rest. Some wanted to stay on this land and among the people they loved.

Remembering the beginnings, we express our gratitude to the Missionary Brothers, because this enthusiasm, dedication, and zeal of the beginnings has always been in you and still is. We go into the future with courage and hope, because we feel the support of the Lord Jesus.