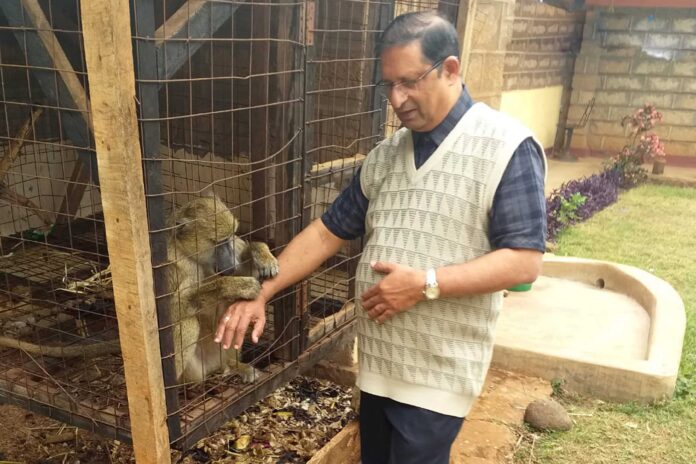 A day before Christmas eve, the confreres in Kenya were sad to hear of the death of an ‘extra-ordinary’ member of our community at Iruma, Meru.  Our dear “Stinky” died of old age. For the past one week, it was showing signs of fatigue and weakness. Then, one day it fainted and slowly it breathed its last on 23rd December 2022.

Stinky was a baboon. She was bought by the late, Fr. Patrick D’Souza, who was superior of the community 22 years ago when it was hardly one year old. Since then it was with us till it breathed its last. The name ‘Stinky’ was given by Fr. Toppo, who had a special attachment to it. When it was brought to us, there was a wound in its body where a wire was tied to its body to prevent it from running away. The wire was cutting into its flesh. It was stinking. Toppo cut the wire carefully and with Dettol lotion the wound was cleansed and eventually it got healed. But the name ‘Stinky’ remained. Stinky was very friendly. It loved a hug from his ‘friends’. But those who come to the house first time would feel embarrassed when it would show its pink rump when someone comes near it. As one of our confreres said, Stinky is saying, “kiss my ass..” Though for us it may seem to be derogatory, according to Toppo, in the animal world, it is a sign of submission.

Stinky used to eat anything edible- boiled egg, cake, banana, cooked meat, and a variety of fruits. When it was hungry it used to bang the food-plate on the bars of its cage.

Though it was friendly, it had its own likes and dislikes towards some species. It was aggressive towards females in general, esp. sisters. Was it because it was in the community of men? – I wonder!

Before ‘Stinky’ came to the community, there was another monkey named, ‘Pisse’, who used to piss around. It died at the age of 13. Besides Stinky and Pisse, the community at Iruma also had and have a number of other animals and birds. There was a dog named, Ugali. It used to obey every command of the community members- like opening the door, rolling down, fetching the ball, giving shake hands, etc. It was one of the most photographed members of Iruma.

There was a snake, a python, that stayed for 21 years. Though it was in a cage that was enough to keep strangers away from entering the house.  There were tortoises and turtles too for some time.

In the farm, at present, we grow cows, pigs, geese, ducks, chickens, rabbits, turkeys, guinea fowls, and fish. All around there are banana trees and avocados and various vegetables that supply the community kitchen with natural and organic food. Congrats to the superior and community at Iruma!