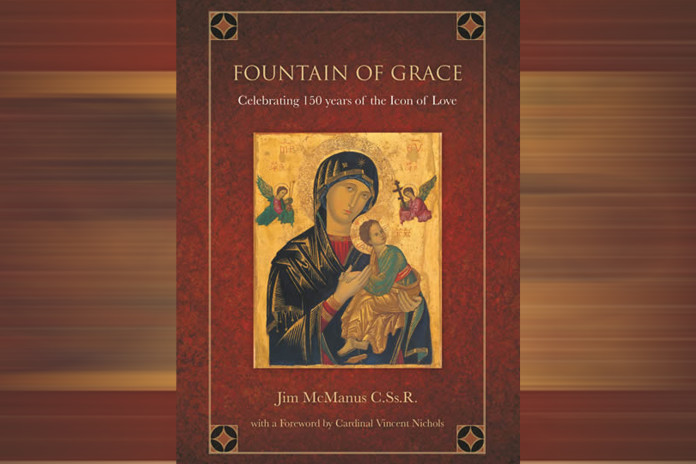 Fr. Jim McManus’ new book on the Icon of Our Lady of Perpetual Succour, with the title, Fountain of Grace: Celebrating 150 Years of the Icon f Love, has a Foreword by Cardinal Vincent Nichols, Archbishop of Westminster. This book encourages a new approach to renewing the Perpetual Novena.  A true devotion to Our Mother of Perpetual Succour, while it is certainly greatly nourished by participation in a weekly, parish celebration, can also be cultivated in the privacy of one’s home and shared with the members of one’s family or with a few friends.  . Since so many parishes no longer have Novenas, Fr. McManus is promoting what he calls The Novena at Home, encouraging devotees of Our Lady to invite a few of their friends or parishioners to join them in their homes to pray the Novena as the great prayer for their families and the needs of the world. This new approach is inspired by The Mothers Prayer Movement that began in Kent, England, 20 years ago with two mothers inviting a few friends to join them in praying for their families. Today in Britain over 4000 groups of Mothers meet each week to pray for their families and the movement has spread to over 100 countries. To support this new approach to the Perpetual Novena we have a dedicated webpage: www.novena-at-home.redemptorists.co.uk
Fr. McManus also retells the story of how the Icon came to be enshrined in the church of Sant’ Alfonso, highlighting the providential role played by  Fr Edward Douglas. Douglas, a Scottish Presbyterian, became a Catholic during the Oxford Movement, and was ordained a priest in Rome. He joined the Redemptorists in London in 1849. When Blessed Pius lX ordered the Vicar General of the Congregation, Fr. Von Smetana, to establish a house in Rome for the General Government of the Congregation, Douglas offered to fund this new development from his family inheritance. The Vicar General sent him to Rome with the mandate to buy a suitable property. After viewing many possible sites he eventually found the right place for the new Generalate and  for the new church of Sant’Alfonso which he also built. Without knowing it at the time, he had actually bought the site on which the demolished church of St. Matthew, in which the Icon  had been venerated for over 300 years, had stood.  When Blessed Pius lX learned that the Icon was in the private oratory of the Irish Augustinian Fathers in Rome he decreed that it had to be placed in the new church of St. Alphonsus. As the Congregation celebrates the 150 anniversary of the Icon being enshrined in the church of Sant’ Alfonso  in 1866 we have  to give thanks for the life and generosity of Fr. Douglas.
The book is available from www.rpbooks.org