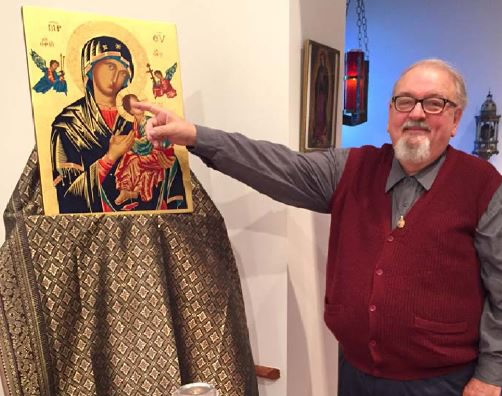 Br. Dan Korn points toward the Icon of Our Mother of Perpetual Help, the focus of his Mirror of Redemptive Love retreat

He began in April with the Sainte-Anne-de-Beaupré Province in Quebec, Canada – a unique experience considering that he doesn’t speak French – where they maintained a prayerful retreat atmosphere and celebrated the Liturgy of the Hours every day. After Br. Dan presented his retreat to the Baltimore Province and the Vice Province of Richmond in May, he had new insights and restructured the retreat for the August session in Oconomowoc. The Edmonton-Toronto Province retreat in October was memorable because the Divine Liturgy was celebrated one day, but the real highlight was when six Redemptorists of the Yorkton Province sang a beautiful Akathist Hymn in Honor of Our Mother of Perpetual Help written by a Redemptorist who was imprisoned in Ukraine. “It truly brought together everything about the icon in relation to the Redemptorists,” he said. Br. Dan was home in Liguori to present his retreat to 43 people at St. Clement Health Care Center on November 9-12.

Participants were very engaged, there was a high level of interaction, and everyone seemed very impressed with the retreat.

“We have told the devotional story of the Icon of Our Mother of Perpetual Help for 150 years,” he explained. “The Jubilee Year presents us with an opportunity for a new beginning. Three things – Constitution 32 about the place of the Blessed Mother in relation to our mission, which the Sacred Congregation for Religious and Secular Institutes approved on February 2, 1982 before we had any knowledge of the iconography; the restoration of the icon in 1991-95 that unveiled new insights about its message; and The Story of an Icon by Fr. Fabriciano Ferrero, C.Ss.R. –comprise the new narrative regarding the icon and our Redemptorist spirituality, and the place of the Blessed Virgin Mary in the mystery of Christ and the Church and in our Congregation.”

“My real passion is making her known,” Br. Dan explained. “My hope is that we will go forth and continue to make her and the Gospel message of redemption contained in the iconography known with new energy for the next 150 years. We have a new way to speak about the Mother of God in our times, but we have to do the work – the prayer of gazing into the icon in a spirit of silence and prayer – to unlock its messages.”

Br. Dan said that presenting the six retreats was “the greatest Marian experience a person could have,” but he welcomes his return to a much quieter life in Liguori.

As inspiration to his confreres, he shared the first selection from St. Alphonsus’ Visits to the Most Blessed Sacrament and the Blessed Virgin Mary that he read – Visit 12 – after he finished his last retreat: “Those who explain me to others will have eternal life.”

And those who work at making me known and loved by others will be predestined. Promise, then, to speak whenever you can, whether in public or in private, of the Glories of Mary and of devotion to her.

“It was such a beautiful message for me to read right after the last retreat,” he said, “And it’s a special confirmation for all Redemptorists to continue to make her known!”