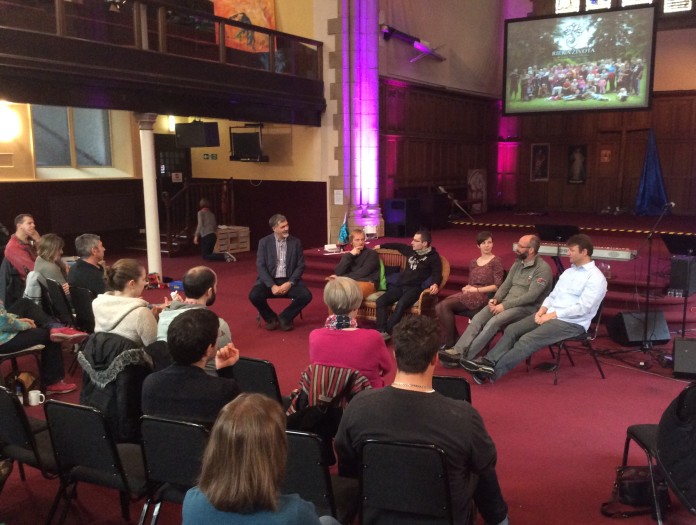 The ecumenical mission by the River of Life Fellowship from Slovakia  to the Community Church Edinburgh, and the Parish of St. Patrick, Scotland

At the invitation of the Vicar General of the Archdiocese of St Andrews and Edinburgh, Mgr. Philip J. Kerr and the Protestant church: Community Church Edinburgh, the missionary fellowship River of Life  together with a Redemptorist missionary, Fr. Rastislav Dluhy, led various evangelisation and formation activities for some Catholic and Protestant communities in Edinburgh. In the evangelisation programme that took place from 12 to 16 November, not only Scottish people but Poles and other nationalities took part.  River of Life spoke to and led meetings and prayers for participants of an ecumenical course called Ignite.  They also did an evening for the Polish Catholic Legion of Mary group.  Students from St. Thomas Aquinas and Holy Rood schools also heard the gospel  proclaimed by River of Life.

For part of the Community Church Edinburgh, we led a retreat called In His Presence.  On Saturday evening, in the Catholic Church of St. Patrick, there was worship in the church, with Adoration, and members of the Legion of Mary, members of River of Life and others, invited people to come into the church for a short prayer and to light a candle.  Coming as it did just after the terrorist attacks in Paris, many people responded to their invitation.

On Sunday, when Pope Francis visited the Lutheran community in Rome, singing hymns and sharing, we were doing the same. On Sunday night at St. Patrick’s we had Mass followed by worship and Adoration.  On the last day River of Life joined the Wellsprings Protestant Community in a time of worship and intercession for Scotland that goes on 24/7.  Our Protestant brothers and sisters joined in the activities in St. Patrick’s and the Catholic schools we visited.

We have been in contact with the leaders and members of Community Church Edinburgh for more than 20 years and they have been a great blessing to us especially in building community and deepening our awareness of the charismatic gifts.

Let us listen to the Holy Spirit by listening to one another!