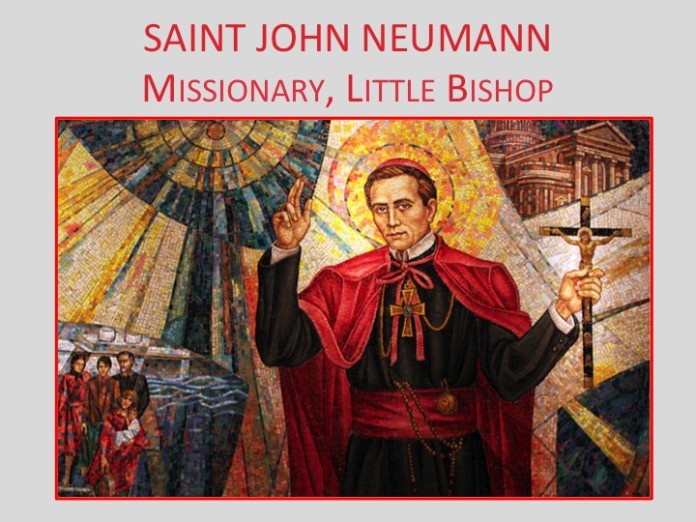 In theological terms, a miracle is an extradordinary event, produced by God in a religious context which is beyond the powers of corporeal nature, or at least extremely unlikely from the standpoint of those powers alone. Such events are a sign of supernatural activity.

Pope Benedict XIV set the conditions for the official acceptance of a miracle in his classic work on the Beatification and Canonization Process in the mid 1700’s, and essentially these conditions still stand today. They are:

This demonstrates the traditional caution the Church employs in officially recognizing miracles. For example, these requirements have been in use at Lourdes, France for decades. The review process for a single alleged miracle is eight to twelve years. Despite this rigor, cures have been pronounced miraculous by the Church. They are a small percentage of the total number presented for examination.

Of the hundreds of miracles claimed to have been obtained through the intercession of St. John Neumann, only three have been evaluated and accepted in accordance with the rigorous Canonization standards. The following are the miracles which satisfied those required for his Canonization. They were quite celebrated in the media at the time of their occurence. They are:

I.  ITALIAN GIRL, ELEVEN, IS CURED OF ACUTE PERITONITIS: In May, 1923, eleven-year-old Eva Benassi of Sassuolo, Italy was stricken with acute diffused peritonitis. By the time her family’s physician, Dr. Louis Barbanti, correctly diagnosed Eva’s condition, she was beyond medical help.

On a Monday morning a priest gave Eva the last rites. That afternoon Dr. Barbanti told Mr. Benassi that Eva would not live through the night.

While praying to Neumann, Sister touched Eva’s swollen abdomen with a picture of the Philadelphia Bishop. Her community of nuns and the Benassi family also prayed to Bishop Neumann.

That night the peritonitis disappeared.

In December 1960, in the final examination of her case, before the beatification of Bishop Neumann, Eva, forty-eight and the mother of two children, was in perfect health.

II. NINETEEN-YEAR-OLD VILLANOVAN SAVED AFTER CAR ACCIDENT: On the evening of July 8, 1949, nineteen-year-old Kent Lenahan of Villanova, Pennsylvania was standing on the running board of a moving car. Suddenly the car swerved out of control, crushing Lenahan against a utility pole.

When he arrived at Bryn Mawr Hospital his skull was crushed, his collarbone was broken, one of his lungs was punctured by a rib, he was bleeding from ears, nose and mouth, and he was comatose. His temperature was 107°, his pulse 160.

A few hours after being admitted to the hospital, doctors treating Lenahan decided there was no hope for his recovery, and ceased medical treatment. His parents refused to believe that no one could help their son.

They went to the Bishop Neumann Shrine and prayed for his recovery. A neighbor gave them a piece of Neumann’s cassock. Shortly after the Lenahans touched their son with the cloth, J. Kent Lenahan began to recover from his injuries. His temperature dropped to 100°, his pulse dropped to normal. Less than five weeks after the accident Lenahan walked unaided from the hospital.

Now a music teacher in Pennsylvania, J. Kent Lenahan has only one explanation for being alive today: “They couldn’t explain what happened, so I guess it was the Man upstairs.”

III. BOY’S CANCER DISAPPEARS AFTER PRAYERS TO BISHOP NEUMANN: After months of treatment for osteomyelitis, a bone inflammation, doctors found in July, 1963 that six-year-old Michael Flanigan of West Philadelphia had Ewing’s Sarcoma, a usually lethal form of bone cancer.

The cancer, virtually incurable when it spreads beyond the initial diseased area, had spread from the youth’s right tibia to his jaw and lungs.

“If a similar case came to me today,” a doctor who recently studied Michael’s case commented, “I’d have to say that any chance of survival would be less than zero.”

When doctors notified Michael’s parents that their son had virtually no chance of recovering from the disease, Mr. and Mrs. John Flanigan decided to take Michael to the Bishop Neumann Shrine at St. Peter’s Church, Fifth Street and Girard Avenue.

After several visits to the Shrine, Michael began to make a dramatic recovery. No signs of cancer were found in his jaw and lungs by October, 1963. By Christmas, 1963, when Michael was supposed to be dead or close to death, all signs of Ewing’s Sarcoma had vanished.

In December, 1975, after a final examination of Michael’s medical records, the Medical Board of the Vatican Congregation for the Causes of Saints declared that Michael Flanigan’s cure was “scientifically and medically unexplainable,” and attributed it to the intercession of Bishop Neumann.

It was this miracle that paved the way towards sainthood for the Philadelphia Bishop.