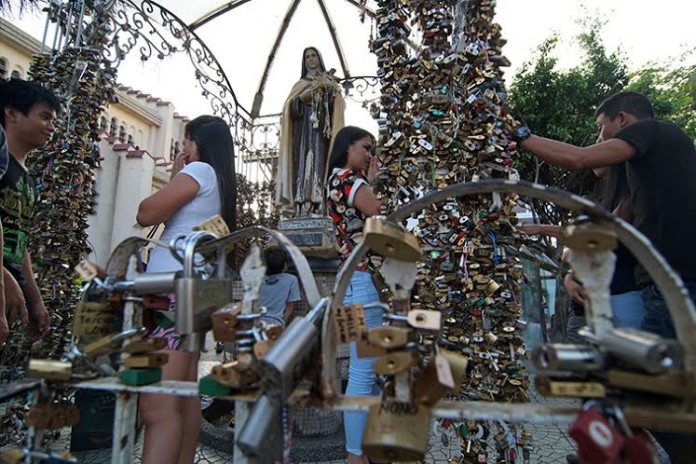 (Manila) – For Tony and Iza, the best way to celebrate Valentine’s Day is to go to church and praying together.  After the Mass on the 14th February, many couples chained their love to a fence around a grotto of Saint Thérèse of Lisieux located right outside the Redemptorist Church in Baclaran with a padlock.

“For us, it’s a sign of our long-lasting love. And we have a witness, Santa Teresita,” Iza said with a smile on her face.  Like Tony and Iza, cupid’s arrow continues to strike the hearts of many churchgoers to do the same, attracting more couples who wants to profess their devotion through a love lock. 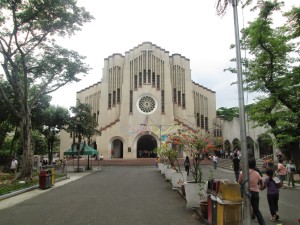 He said it all started when a church worker, while cleaning the church compound, found a padlock and fastened it to the fence around the statue.  “In just after a week, we noticed more padlocks attached to the fence and then that’s it, it started there,” he said.  After three months, he said more than 30,000 padlocks were already covering the image of Santa Teresita.  As missionaries, the Redemptorists built an image of St. Therese to remember her as one of the patron saints of the missions, not of romantic relationships or marriage.  “So the love locks have no direct relationship with St. Therese, but we just kept them there,” Ciriaco said.

According to him, the love locks are not exclusive to lovers as it has also been attracting many families. For others, it symbolizes their strong bond as friends.  Reaching the tipping point towards the end of 2015, he said the parish finally decided to remove thousands of padlocks over concerns that it might cause the fence to collapse.  “We removed around 50,000 locks from one side of the fence,” he added.  He also said the remaining ones will be removed within the month and will be relocated to another place within the church’s compound.  “So we are just going to transfer them all to a permanent home for love locks because it’s obviously something people [are] passionate about,” Ciriaco said.