Provincial Superior Steve Rehrauer and Provincial Vicar Mat Kessler have been representing the Denver Province at the Phase I meeting of the General Chapter for the Conference of North America for the past two weeks. 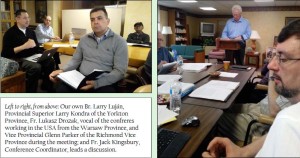 “The decision to structure the Chapter in three phases was intended to involve as many confreres as possible in the Chapter. It has raised the awareness that we need to look at our local reality in light of the bigger context, and it has provided our local communities with an opportunity to participate more directly in the process,” explained Fr. Steve. “Representatives from the North American Conference are discussing and discerning the challenges and issues identified worldwide, preparing for the Phase 2 canonical meeting scheduled in Bangkok this November. Hopefully, this process makes us all feel a bit more connected to the Chapter.” 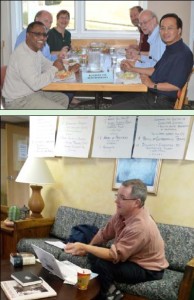 Special thanks to Fr. Henry Sattler of the Baltimore Province for sharing a few photos! From above, left to right: General Government officials with representatives of the Conference of North America; General Consultor Jeffrey Rolle, Provincial Superior Mark Miller of the Edmonton-Toronto Province, Anne Walsh, Fr. Mario Doyle, vocal of the Sainte-Anne-de-Beaupré Province, Fr. Steve Rehrauer and Vice Provincial Dominic Long of the Extra Patriam Vice Province; and Fr. Mat Kessler at work.