Tapping into greener power, a popular Catholic shrine in Manila is taking steps toward becoming the first church in the Philippine capital to be completely solar-powered.

The National Shrine of Our Mother of Perpetual Help, a shrine operated by the Redemptorists, will be installing solar panels in the coming months.  Brother Ciriaco Santiago, head of the congregation’s Commission on Social Mission Apostolate, said the project is a “step toward becoming a green church.”

The religious community approved to use the church’s roof to generate electricity for the shrine, including its offices and other facilities.  “It would take at least three months to finish the installation, but the target is to complete it within the year,” Brother Santiago told ucanews.com.

More than reducing the electricity bills, the brother said the decision to go solar is part of the congregation’s environmental advocacy that is inspired by Pope Francis’ encyclical Laudato si’.  Brother Santiago said the use of solar power will reduce the shrine’s carbon footprint, a key goal in the church’s mission to fight climate change and protect the environment. “This is basically rooted on our desire to help protect our environment and raise awareness about climate change,” he said.

The shrine also will be using art as a medium to promote “care of protection.”

At the front and right side of the church will build a dynamic mixed media installation, including mosaics and sculptures, about the environment and other social issues. 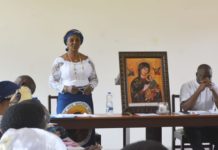