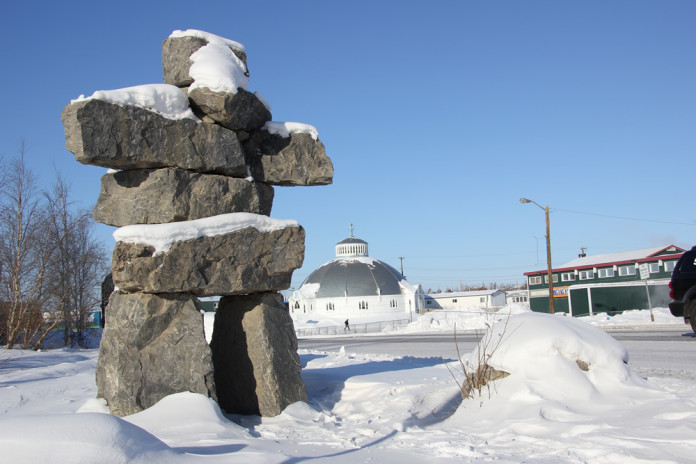 February was filled with a number of important community and parish events which I would like to share with you in this update letter.
At the beginning of the month the town council of Inuvik called upon the help of its residents to provide feedback regarding a proposed amendment to a community by-law. The owner of the Mad Trapper Inn was seeking to overturn the rule prohibiting businesses, which sold alcohol as the mainstay of their income, from opening on Sundays and Good Friday. It was an emotional issue as the bar owner is a long-time member of the community and in his words he was only asking for, “fairness” in order to compete with other establishments which were allowed to serve drinks along with food on Sundays. Town members saw it differently and 69 people (a huge number for a town meeting in Inuvik) came out to share their voice. One by one nearly half of those present stood up to speak about the harm alcohol had done to their family and to the town and clearly stated that they did not want the town to be seen encouraging anymore drinking then was already taking place. At the end of the evening a show of hands revealed that all but two were against the motion, the two being the proprietor and his employee who was honest enough to state that he was not from Inuvik and had no investment in the town’s future.

Alcoholism and drug dependency are perennial issues not just in Inuvik but across communities in the Arctic, particularly in the smaller settlements. Isolation, poverty and dysfunction as a result of generational issues of neglect and abuse contribute to make the north a hot bed for addiction. Those who suffer most are often not the addicts themselves, but family members, wives and children, who bear the burden of the sickness as domestic abuse takes its toll. This perhaps offers an insight as to why people are so passionate about a change to a by-law that would allow an extra day of drinking in town. At the end of the month the town council met for a vote on the issue and the proposal to amend the by-law was soundly defeated.

In keeping with a similar theme my Anglican counterpart, Rev. Stephen Martin and I met with Joey Amos, the director of the Inuvik Emergency Warming Centre (IEWC), to plan a blessing of their new building which opened this past November. The IEWC, which is sometimes referred to as the “Damp Shelter”, is an alternative housing solution for chronic addicts who don’t meet the conditions of sobriety in the other temporary shelters. These folks, mostly men along with some women, spend much of their lives on the streets of Inuvik or in their home communities, sometimes celebrating and sometimes battling their addictions and living situations. When winter arrives even the hardiest among them are at the threat of loss of life or limb due to the cold and so the shelter is available as a positive option. Joey runs the shelter like a home and it is comfortably furnished with safe space for the storage of personal belongings. Food is abundant thanks to kind donations of wild meat and fish from people in town. In many cities a solution like this might come up against the NIMBY factor (Not in My Back Yard) but in Inuvik there is a genuine sense of care for those who struggle with alcohol and the reception of the Shelter has been, like its name, warm. 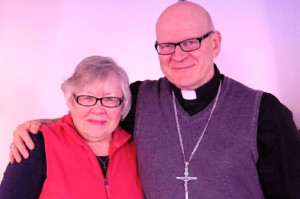 I was happy to welcome Gerri Fletcher and Bishop Mark Hagemoen to town. The Bishop was passing through on his way back from the ordination of Bishop Hector Vila and continued on to Fort Good Hope for a pastoral visit.
Gerri, the religious education coordinator for the diocese stayed around for a few days and led a liturgy workshop for lay presiders.
We welcomed 12 participants from across the western Arctic and had great discussions about the formation of parents and families as they prepare to have their children baptized as well as how to lead Sunday services in the absence of a priest. Many thanks to Gerri who took the time to be with us and to share her knowledge and experience. 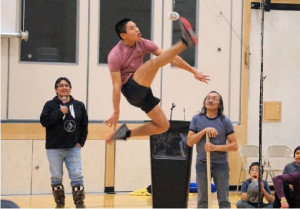 One of the highlights of the month was the arrival of the Northern Traditional Games competition which took place in Inuvik in the school gymnasium. The purpose of the games is to expose school aged young people to the many
traditional sports of their culture and to foster a spirit of competition and fair play. On the evening of the opening
ceremonies many of the sports and games were demonstrated and the degree of athleticism and sheer tolerance for pain left spectators in awe. Most of the
events have evolved from activities that were meant to prepare a young hunter for real world situations of survival in a harsh environment and demand great
strength and focus. Besides athletics there were also social games in which members of the community faced off and tried to make their stony faced
opponent smile or laugh by dancing in a silly way or by imitating the sound of a wild animal. While funny and entertaining for the crowd these types of games
would have been an important tool for bringing different families together during the long winters and to foster a sense of community and friendship.