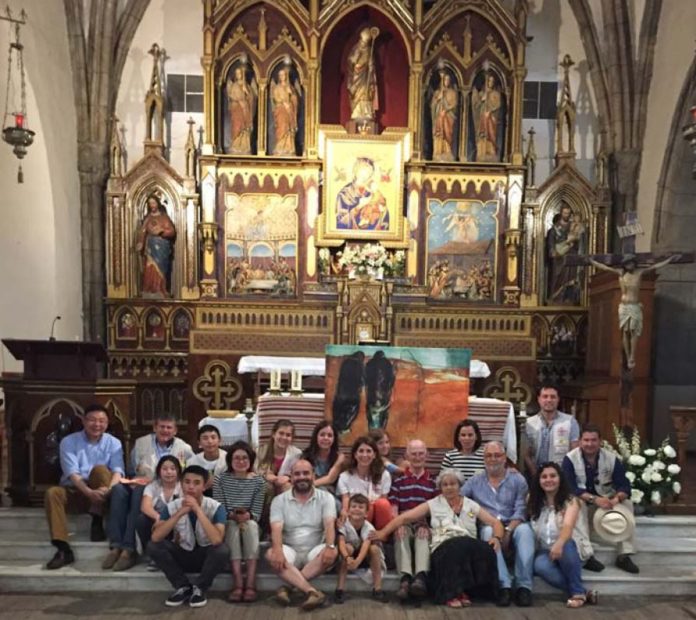 According to our Christian tradition, the remains of the Apostle James the Greater were buried in northwestern Spain during the early part of the second century. Ever since, Christians have traveled across Europe on pilgrimage to his burial site as acts of penance or to ask his intercession for special favors. The number of pilgrims – believed to be in the millions – peaked in the Middle Ages and gradually slowed to a trickle until St. John Paul II’s visit to Santiago de Compostela in the 1980s renewed interest. Once again, the faithful from throughout the world are making the centuries-old pilgrimage.

Pilgrims walk or bike on a few traditional routes, but the most popular is the Camino Frances, a 1,000-kilometer trail that begins in the Pyrenees that border France and Spain. The whole trip on the trail that crosses the northern border of Spain takes about 32 days. During the months of July and August, about 100,000 pilgrims head toward Santiago. Most of them pass by the Redemptorist Church in Astorga. Many pilgrims have little religious devotion, but the Redemptorists hoped to be present to them in some way and started a ministry of hospitality about five years ago. They open the church in the morning and are simply present to the pilgrims who pass by the church.

Confreres offer practical help like water or a passport stamp, as well as advice and spiritual support. All of the pilgrims are invited to a half-hour evening prayer service. After listening to the story of Emmaus, the pilgrims understand that Jesus is accompanying them on their journeys. After prayers of petition are offered, the pilgrims receive a final blessing and prayer that God guide them as they continue their camino.

The local Redemptorists rely on outside help to conduct this ministry. Redemptorists and lay volunteers from around the world commit to spending a week to work with the pilgrims. One section of the monastery in Astorga has been transformed into housing space where all of the volunteers eat, pray and recreate together as they share their common ministry.

It is impressive to see how many lay people have internalized our ministry and spirituality. Two years ago I walked the Camino Frances from France to Astorga, and last year I walked the section from Atorga to Santiago. I was glad to go back and participate in the Redemptorist pilgrim ministry this year, as the camino has been a blessing in my life and spirituality as a Redemptorist.