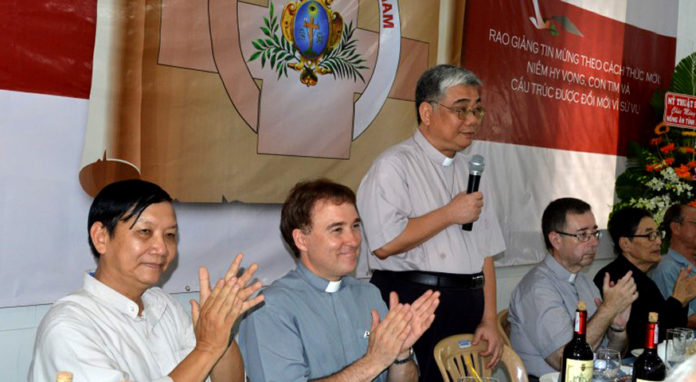 The Redemptorist priest arrived in the diocese of Kontum in 1969, along with some fellow priests. He studied the local language and won the trust of the population. After the hard years of war and an arrest by the Communists, he saw the flowering of baptisms. He baptised a thousand in the mountains; now Catholics are present in 90 villages. The Redemptorists run three missionary centres that have 24,000 faithful.

(Hanoi, VietNam) – Fr Joseph Trần Sy Tin spent a life spent doing mission in the diocese of Kontum (west-central Vietnam) among tribal Jarai. The Redemptorist priest has lived in the area since 1969 and for almost 50 years has accompanied the local population in its journey of faith.

A few days ago, Fr Joseph met with priests, religious and faithful in the diocese, and spoke about the story of his mission.

Mgr Paul Kim Seitz, bishop of Kontum, had invited priests to work in the diocese for the first time in 1960.

The first village where Fr Joseph Trần Sy Tin settled was to Pleikly. Together with three other Redemptorist priests, he founded the “Group for going out” (Nhóm Ra Đi), whose purpose was to “go out” to live among ethnic minorities who have not yet known Jesus.

“When we arrived in Pleikly,” said Fr Joseph, “we had no house to stay in and did not know anyone in the village. We started to study the Jarai language and visit families to make friends. We ate with them and practiced the language.”

At harvest time, “we asked the villagers if we could go into the field to work with them. Sometimes we had lunch together in the rice fields. At evening, we came back home with them and often had dinner together.”

After a period of working together, one night the village chief acknowledged them for the first time. “As we ate dinner around the fire, he told us: ‘We took care of our people for years, as regards food, clothing and housing. But no one had ever spoken of the spirit, of good and evil, of happiness. You need to tell us these things.’”

The 1970s were the hardest for Fr Joseph’s mission because the war reached the villages of Kontum. In 1971 the priest was arrested along with a companion by Communist authorities and was sent to near the border with Cambodia, where he lived with poor people suffering from malaria.

After the end of the war (1975), the priest thought that no one would follow Christianity. However, by 1988, many people from ethnic minorities began to be baptised. By 2000, Fr Joseph had baptised a thousand people in the mountains, mostly ethnic Jarai.

The new Catholics were unable to attend Mass regularly because the Communist authorities imposed restrictive exit permits from the villages. Yet, by 2005, Catholics were present in more than 90 villages.

Fr Joseph’s mission relies heavily on the laity whose role is a priority according to the priest. Without them, there is no real mission.

Indeed, the faithful themselves have to proclaim the Good News everywhere, accepting the risks that it entails. Over the years, Fr Tin has trained small groups of lay missionaries.

The clergyman is now the vicar of Pleichuet parish, which has 1,400 members. The Redemptorists also run mission centres in Cheoreo Tolui and Pleichuet Pleikly that, together with the parishes, have more than 24,000 Catholics.