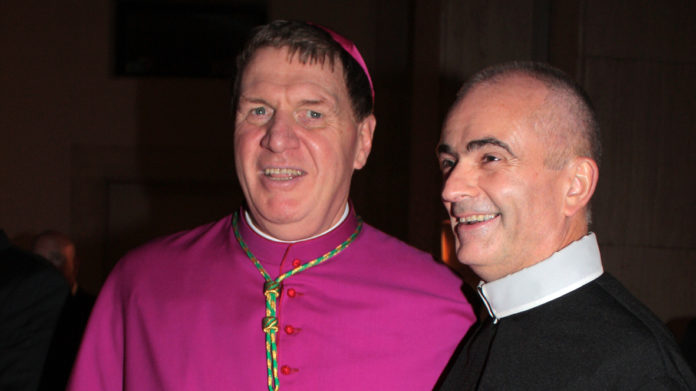 On Sunday, October 9, 2016, Pope Francis announced the names of new Cardinals to be created at the Consistory on November 19. Among those named was our brother, Archbishop Joseph William Tobin of the Denver Province, Archbishop of Indianapolis, USA.

Cardinal-designate Tobin embodies in so many ways the description of the Redemptorist Missionary in Constitution 20:

“Strong in faith, rejoicing in hope, burning with charity, on fire with zeal, in humility of heart and persevering in prayer, Redemptorists as apostolic men and genuine disciples of Saint Alphonsus follow Christ the Redeemer with hearts full of joy; denying themselves and always ready to undertake what is demanding, they share in the mystery of Christ and proclaim it in Gospel simplicity of life and language, that they may bring to people plentiful redemption.”

Shortly after the announcement, Cardinal-designate Tobin explained how he understands this appointment: “Pope Francis is a grace for this time, and he really needs to choose his collaborators carefully. I am aware of how vast the Catholic Church is, and how many great leaders it has. The new Cardinals were chosen for the present needs of the Church… to represent the catholicity or universality of the Catholic Church.” It is clear to me, and to his brothers in the Congregation of the Most Holy Redeemer, that Pope Francis has chosen wisely!

In choosing Archbishop Tobin for this important and special service, the Holy Father has not only affirmed his many gifts and talents, as well as his years of service to the Church and to the Congregation; Pope Francis has recognized his tremendous experience and wisdom which will be at the special service of the Holy Father in the Consistories and other commissions, as well as in future conclaves which will elect his successors.

As a Redemptorist missionary, Fr. Tobin lived and served with and among immigrants as they created a new home for themselves and their families. Their experience became central to his own, and their needs called forth his generous response in service. As General Consultor, he promoted the vocation of Redemptorist missionaries among youth and young adults, as well as visiting all the continents and experiencing the worldwide missionary activity of the Congregation. As Superior General, he was called to be a pastor and leader, administrator and brother, counselor and guide. And he responded with generosity, patience, wisdom and passion.

As a member of five Synods, he participated in one of the highest expressions of collegiality and the universality of the Church. As Archbishop and Secretary of the Congregation for Institutes of Consecrated Life, he collaborated closely with the Holy Father and Religious women and men around the world. As Archbishop of Indianapolis, he has returned to his ‘roots’ – a pastor among people, a missionary among pilgrims, a leader with great experience and skills for collaboration and collegiality. As Cardinal, he will bring all of this commitment, passion and experience to the service of close collaboration with Pope Francis for the sake of the whole People of God. The Holy Father has chosen wisely, and all of us are blessed in this nomination.

As his brothers, Redemptorist missionaries are justly proud of our brother, now Cardinal-designate. And all of us wish him well, and we will remember him in our prayers.

May God bless him with peace and joy. May our Mother of Perpetual Help accompany him always. And may St. Alphonsus, St. Gerard, St. Clement and St. John Neumann intercede for his service as Redemptorist Missionary, Bishop and Cardinal as he follows Jesus the Redeemer, proclaiming Good News to the abandoned and the poor!