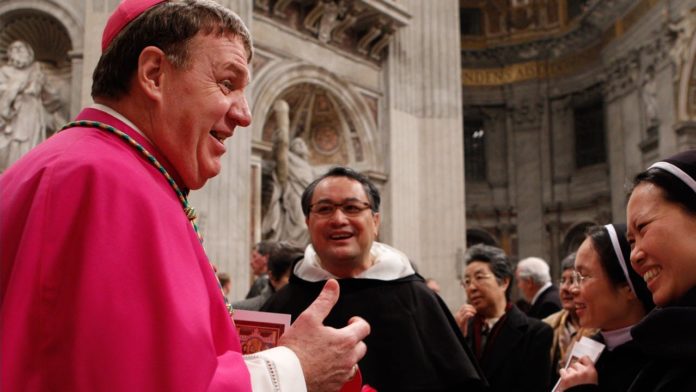 A portrait of the Redemptorist cardinal, who sees the fighting between factions in the US Church as a contagious illness that is contracted as a result of the “divisive nature of the nation’s politics”

The US Church is suffering from a “balkanisation of faithful”. And the polarisation of Catholics “between so-called right wing and left wing, or progressive and traditionalist factions, who point fingers at each other,” is a contagious illness that may have been contracted as a result of the “divisive nature of the nation’s politics, which confines and splits people into “disparate ideological camps”. This is the Archbishop of Indianapolis, the Redemptorist Joseph William Tobin’s take on US Catholicism. Francis included him in the roster of 17 new cardinals called to receive the biretta at next 19 November’s Consistory. The cardinal-to-be gave his diagnosis of the diseases afflicting the US Church in the spring of 2014, in a speech at the College Theology Society’s annual convention. In this speech, he gave a detailed description of the permanent sclerosis of the “pointed finger” which condemns, disparages and ridicules the “enemy”. He described it as a sort of auto-immune disease, a reluctance “to humbly examine the distance between our ideals and the present moment, which is the point of departure for a life of continuing conversion”.

Thanks to a mixture of character, luck and fortuitous encounters, “Joe” Tobin’s human and spiritual trajectory has always kept him a safe distance away from rigid and divisive attitudes that have weighed down much of the Catholic world in recent decades, not just in the US. Born in 1952, to a family of Irish descent, he was the first of 13 siblings and grew up in Detroit, where his religious vocation blossomed close to home, given the proximity of the local parish church, frequented by a large Hispanic community and served by the Redemptorists. Tobin made his temporary profession of religious vows as a member of the Congregation founded by Alfonso Maria de’Liguori – holy friend of sinners and patron saint of confessors – in 1972 and his perpetual vows in 1976 at the age of 24. While in Rome, the Pontifical Alphonsian Academy (the Redemptorist institute for moral theology) was dominated by the figure and theological thought of Bernard Häring, the young Tobin completed his cursus studiorum at US academic institutions, obtaining his degree in Pastoral Theology from the Mount Saint Alphonsus Major Seminary in Esopus (New York). At that time, Tobin spent more of his youthful energy on pastoral activities than on studying and academia: first, he was deputy parish priest and then parish priest at the same Detroit parish, where he discovered his vocation and where until the 1990s he carried out his priestly ministry among the Hispanic communities. He was also Episcopal Vicar from 1980 to 1986.

Tobin only spent a prolonged period of time in Rome in 1991, when he was elected Consultor General of the Redemptorists. His Roman mission was extended when his confreres chose him as the Congregation’s Superior General for two consecutive mandates, from 1997 to2009.In 2003 he became the vice-president of the Union of Superiors General, in charge of relations between that body and the Vatican dicastery for religious. But rather than walking the Vatican corridors, his tasks took him to 70 countries, where he was able to observe the disastrous crises and growth potential of male and female religious communities around the world from the inside. This is what made Benedict XVI choose him as new Secretary of the Congregation for Institutes of Consecrated Life and Societies of Apostolic Life, in the summer of 2010.

Tobin, who was ordained Archbishop in light of his Vatican nomination, took up his post, right in the midst of the tensions between the Holy See – Congregation for Religious and former Holy Office – and a large portion of female religious congregations in the US, represented by the LCWR. Vatican dicasteries carried out checks and apostolic visits to verify the orthodoxy and disciplinary soundness of US nuns. The LCWR was chided above all for its support of Obama’s healthcare reform, an attitude that was criticised by pro-life activists and the bulk of US bishops because of the public funding made available for abortion and other means of contraception. On the other end of the scale were the US nuns who claimed the Vatican’s apostolic visits were tantamount to a “witch-hunt”. Tobin joined the game without adopting an abrasive tone. In 2012, after the Congregation for the Doctrine of the Faith published his doctrinal report on the LCWR, the Secretary publicly acknowledged that the Vatican’s approach as a whole created a heavy atmosphere that did not favour dialogue and many nuns “perceived that someone was telling them that their life was not loyal and not lived according to the faith”. The neorigorist blogosphere soon targeted Tobin because of his diplomatic approach, which was deemed “unusual for a high-ranking Vatican prelate”. In October 2012, just two years after his Vatican nomination, the Redemptorist was appointed Archbishop of Indianapolis. Media and religious circles almost unanimously and unthinkingly interpreted this as a classical promoveatur ut amoveatur (promote in order to remove) move, resulting from a lack of compatibility with the then dominant Curia tendencies. Three years later, during his visit to the US, Pope Francis decided to thank the “undisciplined” US nuns, with words that were laden with affection: “What would the Church be without you? Women of strength, fighters, with that spirit of courage which puts you in the front lines in the proclamation of the Gospel.”

Even back then, Tobin’s approach to the US nuns did not show an affiliation on his part with any clerical ideological network. The future cardinal does not seem like the kind of person to get mixed up in clerical conformism, old or new. In 2010, while many within the Church were satisfied with the deafening calls for “zero tolerance”, Tobin kept on urging the religious order leaders “to ask God to place his finger, the Holy Spirit, into our ears,” to overcome extreme functionalism, concerns about sex abuse and the decline in vocations, which drown out everything else, deafening us all, like the drone of vuvuzelas, long plastic horns used by fans at the World Cup soccer tournament in South Africa, emitting an ear-splitting sound that often drowned out all other sounds.

Dealing with problems from the inside, seeking to resolve problems patiently, without adopting plastic poses to please the cameras. This is Archbishop Tobin’s way. In the recent past, he has not slunk away from albeit polite confrontations with Indianapolis’ governor, who asked him to suspend Syrian refugee welcome programmes run by his diocese. In the vast US territory, where others are advocating and raising protection barriers to stop the influx of migrants, Tobin is well aware of the fact that there are many sectors of the local Church that find themselves at a loss with Francis’ magisterium and are trying to overcome the awkwardness by pigeonholing their gestures and words in an interpretative framework of progressives v conservatives, that is falling apart at the seams: What I’ve seen is how disruptive Pope Francis has been within the hierarchy of the United States,” said the future Redemptorist cardinal in his 2014 speech to the College Theology Society. “I think there was a particular image, perhaps, of what it means to be a pastoral leader in this country, and Francis is disturbing it. I think there is some resistance to a different way of doing the Gospel mission of the Church. So pray for Francis’ health.”