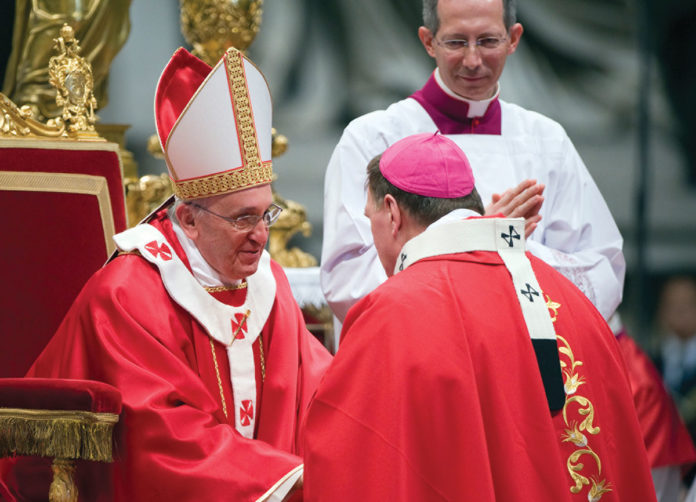 Pope Francis greets Archbishop Joseph W. Tobin of Indianapolis after presenting him with a pallium during a Mass marking the feast of Sts. Peter and Paul in St. Peter’s Basilica at the Vatican on June 29, 2013. (CNS photo/Alessia Giuliani, Catholic Press Photo)

As Archbishop Joseph W. Tobin headed to Rome to be installed as a cardinal by Pope Francis on Nov. 19, he naturally thought again of all the ways his life has changed in the past six weeks.

He also thought of how those life-changing moments have been shaped by the relationship he has formed during the past 11 years with the pope.

Returning to Italy for his installation as a cardinal in St. Peter’s Basilica at the Vatican, Cardinal-designate Tobin is also returning to the place he first met Pope Francis.

The year was 2005, and the two men were participants in a meeting of the Synod of Bishops. For the better part of four weeks, they sat next to each other, talking about the issues and getting to know each other through their shared ability to speak Spanish.

At the time, Cardinal-designate Tobin was the superior general of the Redemptorist order while Pope Francis was Cardinal Jorge Mario Bergoglio, the archbishop of Buenos Aires. The synod meeting took place shortly after the conclave of 2005 that elected Benedict XVI as pope—a conclave in which many observers noted that Cardinal Bergoglio likely finished in second place.

“I told the cardinal later on that he was my mother’s candidate [in 2005],” Cardinal-designate Tobin recalled, citing the way his mother appreciated how then-Cardinal Bergoglio lived in a small apartment, took a bus to work and cooked his own meals. “He got quite a laugh out of that.”

From that moment on, whenever their paths have crossed, Pope Francis has always asked Cardinal-designate Tobin about his mother, Marie.

“Like a good pastor, he remembers things,” Cardinal-designate Tobin said. “Whenever I’ve seen him—and even in times he’s written to me—he always says, ‘How’s your mother, and does she still pray for me?’ I assured him she’s a good Catholic, and she prays for the Holy Father.”

The bond between the two men was especially evident when Cardinal-designate Tobin knelt before Pope Francis in St. Peter’s Basilica on June 29, 2013, to receive his pallium as the archbishop of the Archdiocese of Indianapolis. A pallium is a circular band made from lamb’s wool that symbolizes an archbishop’s role as the shepherd of the archdiocese and his communion with the pope.

In that moment, Pope Francis spent considerable time talking with Cardinal-designate Tobin. At one point in their conversation, Pope Francis told him, “I’ve been praying intensely for you, and I hope your mother is praying for me.”

“I was struck when I received the pallium from him,” he recalled. “First, we had a conversation and … when he put the pallium on my shoulders, he switched from Italian into Spanish because that was the language of his heart. And he said something personal to me. And it was lovely. And I’ve always been grateful for that, but I never thought it would end with the news [about being named a cardinal.]”

Three months before Pope Francis made that October announcement about the new cardinals, Cardinal-designate Tobin had visited the pope in July, in the guest house in Vatican City where the pope lives, to discuss Church business.

Cardinal-designate Tobin shared some of the details of that meeting during a homily he gave at SS. Peter and Paul Cathedral in Indianapolis on Sept. 7.

“I didn’t even have time to put on my game face when I arrived at his floor. The elevator opened, and there he was,” Cardinal-designate Tobin began.

“He invited me into a sort of television room where there were four or five chairs, and he said, ‘Pick whichever one you want. I’ll take whatever is left.’ And we talked, and shared. And I saw a very human side to him. He said twice, ‘I really don’t know why I was elected. I suspect the Italians couldn’t agree on a candidate.’ ”

Then Pope Francis added, “But because I wasn’t looking for this, I accepted it as God’s will. And I believe I’ll have what I need.”

Cardinal-designate Tobin has tried to take heart from that perspective as he deals with the life-changing moments of the past six weeks.

It’s one more bond that connects Pope Francis and Cardinal-designate Tobin, just as they share a vision of the Church that is open and welcoming, just as they are both advocates for immigrants and refugees, just as they both have a natural humility about their own lives and an understanding sense of humanity toward the lives of other people.

“I think it’s the connection of a teacher and his disciple,” Cardinal-designate Tobin has said about their relationship. “When I’ve seen him a handful of times over the last four years, I always thank him for teaching me how to be a bishop—knowing not only how he ministered in the Archdiocese of Buenos Aires, but also what he teaches and how he articulates his expectations for bishops and priests.”

The latest chapter in their relationship will unfold when Pope Francis installs him as a cardinal.

“I really do think, in all sincerity, that I’m an unworthy recipient of his affection,” Cardinal-designate Tobin has said. “I don’t know why. Whatever began in 2005 has continued and deepened.” †