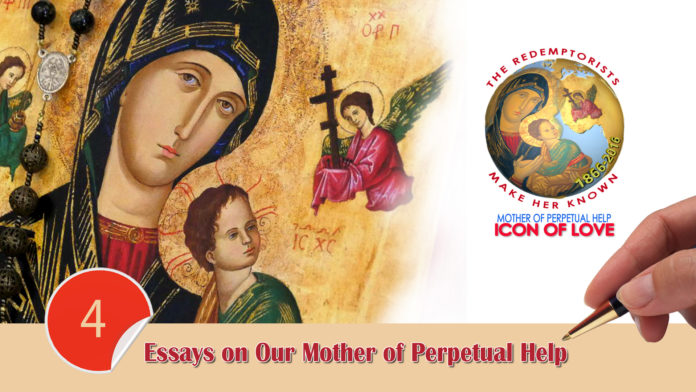 The icon of Our Lady of Perpetual Help was probably painted on the island of Crete sometime in the late 15th century. Crete was home to a flourishing school of icon painting of which our icon is an example.

According to the legend associated with it, the icon of the Mother of Perpetual Help was stolen from a church on the island of Crete by an Italian merchant who brought it to Rome. After various attempts to hide the theft, the icon was given to the Church of St Matthew on what is now the Via Merulana where it was exposed for the veneration of the faithful. It is impossible to recover its origins with any certainty but its origin in Crete has at least the likelihood of being authentic.

From 1212 to 1669, Crete was under the rule of Venice which was a prosperous trading republic. The island’s native population belonged to the Byzantine or Orthodox Church, while Venice was a Latin Catholic nation. The island flourished under Venetian rule and the patronage of artists and painters that was characteristic of medieval Italy was a feature of life on the island where Western and Eastern styles of painting flourished. Western art of this time was more naturalistic and imaginative while the icon style of the Orthodox church followed more fixed traditional styles both in the range of subjects depicted and in the arrangement of the icon and its colouring.

When the city of Constantinople, capital of the Eastern Empire, fell to the Turks in 1453, many of the Empire’s icon painters sought refuge in Crete. This in turn led to a renaissance in the island’s artistic life. One of the best-known Cretan artists, Doménikos Theotokópoulos, eventually moved to Spain where he became better known by his nickname ‘El Greco’ and achieved fame for his very unique style that owes much to the inspiration of traditional icon painting.

Cretan icon painting is characterised by very precise outlines of the figures and the careful modelling the flesh tones by the use of small bright highlights on the cheeks. The garments fall into almost geometrical folds and are characterised by strong colours. Many of these features are obvious in the icon of Perpetual Help.

Virgin of the Passion

There are five main types of icon of the Mother of God in the Byzantine tradition. The first and most common is “The Guide” (Hodigitria in Greek) in which Mary is holding the child and pointing toward him, as a guide to God and salvation. The second is called ”Tender Mercy” (Eleusa) and emphasises the love of the mother for the child, holding him close against her cheek while he wraps his arm around her neck. In the third, “The All-Merciful” (Panakranta), the mother is enthroned as a queen with the child on her lap. The fourth type is “Our Lady of the Sign:” here Mary is depicted with her hands raised in prayer, with the child enclosed in a circle, representing her womb. Finally, the “Intercessor” (Agiosortissa) is the only type that depicts Mary without the child: her hands are held out in a gesture of supplication.

In the course of time, new types of icons appeared, based usually on the five classical types. Our ‘Perpetual Help’ icon belongs to a type that is usually called by the Orthodox, ‘the Mother of God of the Passion.’ In it, the mother holds the child firmly, as in the “Guide” and “Tender Mercy” type. What is most distinctive about it, however, is the presence of the two angels, Gabriel and Michael in the upper corners who carry the instruments of the Passion, with their hands covered by cloths or veils. When suppliants brought gifts to the emperor, they covered their hands as a mark of respect. Usually, a sandal is falling from the foot of the child. This is at once a homely detail that recalls the fragility of the child and a biblical symbol for renouncing one’s own rights (see Deut 25:9 and Ruth 4:7-8).

The oldest representation of “the Mother of God of the Passion” seems to be a fresco in a church in Cyprus dating from about 1192. In it Mary stands full-length, cradling the barefoot child with two full-length angels on each side. It proved to be a popular icon and spread widely among the Orthodox churches around the Mediterranean. It is hardly unexpected that it proved to be a popular icon in the workshops of Crete, especially when it could be painted on wood as a ‘portable icon’ that could be carried around and installed in the home.

Behind the simple icon art of the Mother of God of the Passion there is a rich biblical theology. The underlying text is from the meditation on the priesthood of Christ in the Letter to the Hebrews. The author of the Letter imagines how “when Christ came into the world, he said, “Sacrifices and offerings you have not desired, but a body you have prepared for me; in burnt offerings and sin offerings you have taken no pleasure. Then I said, ‘See, God, I have come to do your will, O God’ (Heb 10:5-7). In other words, from its very beginning, the heart of Jesus was directed toward his death as an act of obedience and submission to the will of the Father.
The liturgy for the feast of the Presentation of the Lord in the Temple is centered on the same idea of the infant Jesus being offered in the first weeks of his life by his parents. A great hymn-writer / preacher of the Byzantine tradition preaching for the feast imagines a conversation between Mary and her son. “One day you will see the child you carry now in your arms with hands pierced with nails out of love for your kind. He whom you call life you will see hanging on the cross and you will mourn his death.” 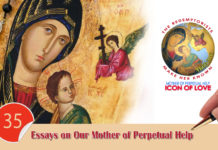 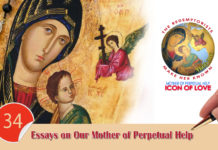 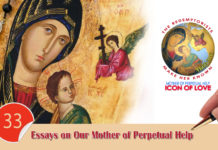