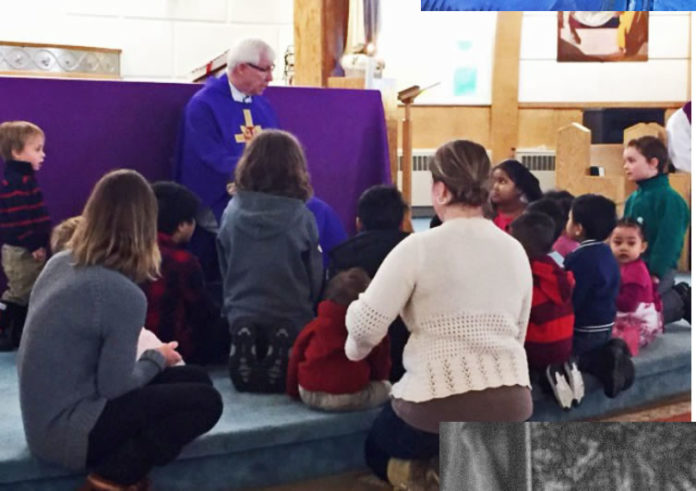 In planning my sabbatical year one of the places where I wanted to have a missionary experience was in the Canadian North, in the land of the midnight sun. Already having one of my confreres, Fr. Jon Hansen, working there in the McKenzie- Fort Smith diocese made the dream a possibility. On February 20th, I boarded my flight in Edmonton and two hours later we landed in Yellowknife. There I was greeted by Sr. Mary Lee and taken for an overnight stay at Trapper’s Lake Retreat Centre. The next morning, after Mass, Bishop Emeritus Denis Croteau graciously took me to the airport to catch my flight to Inuvik. After a short stop in Norman Wells we were off to Inuvik where, upon arrival, I was warmly greeted by Fr. Jon. It was a beautiful sunny day and only -28 degrees.

From the air, I took in a rather vast and rugged landscape covered in snow as far as the eye can see. It looked like a skidooer’s paradise. While driving from the airport to the rectory the vastness from the air gave way to the presence of a wonderful community filled with people who call this winter wonderland of the frozen North their home.

A little later, I bundled up in warm winter wear provided by another confrere in Edmonton, Fr. Tex Keindel and headed out with Jon to explore the little town of Inuvik. As cold as it was, I loved what I saw. A warm and welcoming people and all the conveniences one could want; a hospital, library, a weekly paper called the Inuvik Drum, a recreation centre, a hockey and curling rink, a child care centre, a large public school with six hundred students, a community college, hotels, a small warm home for the homeless, a big post office, and yes, even a detachment of the RCMP.

On Sunday Fr. Jon introduced me to his community, the parish of Our Lady of Victory, as we gathered for Sunday Eucharist in their igloo shaped church. The  following Sunday my first homily was dedicated to the young children and their families.

Over the period of the next two months I met many interesting people within the Church and extended Delta Region of the Arctic. One such person was Chris Thrasher, the son of Mona Thrasher (pictured below) who, as a young woman in the 1960’s, was asked by Oblate priest and pastor Fr. Adam to paint the Stations of the Cross in the church. Chris’ mom has since died, but he is very proud of his mother, who went on to become a fine artist from Inuvik. 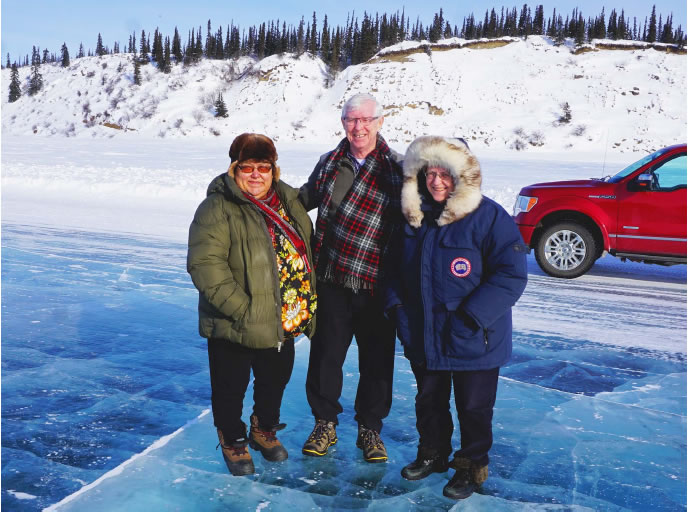 While visiting East Three Public, a school of six hundred students, I met a couple of teachers; Abe Drennan, who teaches grade six and is a fine Musician and Gabriel Archibald who teaches in their French Immersion program. They are squash players and I soon found myself playing on Tuesdays and Thursdays. Truth be known, for an old guy, I held my own!

It’s a Friday night at the Midnight Sun Recreation Complex, and the End of the Road Music Festival kicks off the weekend. It all starts with a talent show that produced some fine local artists to set the tone for one good weekend of music. Saturday, the air was filled with the sounds of the Delta Fiddlers who came together to honour one of the finest fiddlers to come out of the Delta Region, Mr. James Rogers, who passed away last fall.

In the midst of kicking up my heels, I met the leader of the McKenzie Delta Band, Louie Goose and his band members, as well as his daughter Leanne, an outstanding singer in her own right. Over dinner a few weeks later, Louie shared with me that, in the Inuit culture, this wonderful handme-down gift of music is quite common. The celebration of music is to ease the deadly silence, to cut the atmosphere of turmoil, and to receive the presence of peace and love. Louie’s interest in music came very naturally as he listened to his mother singing those old time country songs. Leanne will carry the gift of song into the future as her dad Louie and his band have done through the years in the McKenzie Delta region of the Arctic and beyond.

On March 21, Fr. Jon drove myself, Sr. Fay and Dorothy Loreen to Tuktoyaktuk. It was a three-hour drive along the McKenzie Ice road. Along the way, we stopped on the ice road for a quick photo before continuing our journey. Dorothy is a lay leader from Tuk and she is a great help to Sr. Fay. Fay is a Sister of Charity of Saint John, NB. Sister, as she is warmly referred to, has been in Tuktoyaktuk for thirteen years, and has earned much respect from the people she loves to serve. 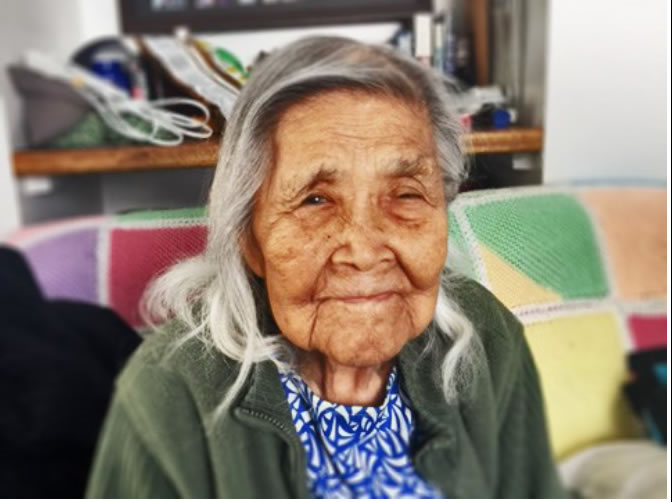 During my week long stay in Tuk, I met several remarkable people. One being a lovely 98-year-old Inuvialuit elder, named Persus (pictured) who is still able to speak her native language. This short visit turned out be one amazing and inspiring time as we listened attentively to her stories of the early days of life in the Arctic. The icing on the cake, so to speak, was her wonderful sense of humour. Truly, this is a woman loved by her family and community and despite all the harsh and challenging times that come her way, she still has a great zest for life itself.

Like many other indigenous communities around the country, young people are less likely to follow in the footsteps of their ancestors in the ways of trapping and hunting. However, I did meet a special person by the name of Robert Gruben, a local man born and raised in Tuktoyaktuk, who is an avid hunter and skilled trapper. Being out on the land was for Robert as much a spiritual encounter, as it was a necessity to support his family. As a young man, he was very attentive and had a keen desire to learn from his elders their cultural skills for fishing, trapping and hunting wild game. This photo of Robert was taken just prior to his going on an eighteen-day hunting trip with just himself and his new skidoo purchased from the sale of furs from his previous trapping expedition. 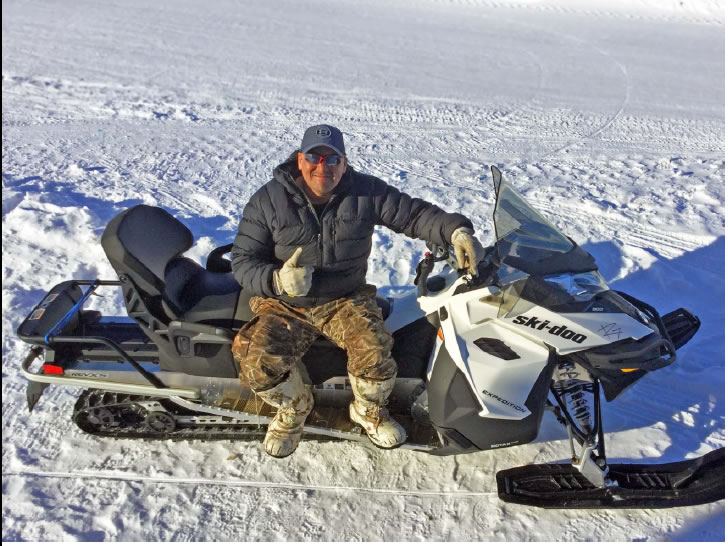 One sunny afternoon as I was wandering around the little Hamlet of Tuk, I dropped into the local public school where I met the Principal, Krista Cudworth from Blind River, Ontario. Following in the footsteps of her mother Agnes, Krista moved up the ladder from being the Physical Education teacher to being the school principal. Her right hand in running the school, VicePrincipal Ephraim Warren, comes from the South West Coast of Newfoundland. He has the beautiful accent that goes with the town he is from, a little community called Grey River. He and his family have been in Tuk now for ten years and it would be fair to say that Tuk has become their home.

Krista, along with the rest of her dedicated staff, provide not only very good learning experiences but have created a warm and welcoming community for over two hundred students from kindergarten to grade twelve, providing them with a good education and the goal of a better future for themselves and this special little Hamlet of Tuk.

The mystery of the human journey is always fascinating. Consider the story of Dr. Mark Prins of Lacombe, Alberta and Dr. Nadia Salvaterra from Ontario. While on individual medical locums in Baffin Island they met, fell in love and ended up getting married in Vancouver, BC. Mark and Nadia are the proud parents of three children, Jacob, Simon and little Arianna and now they call Inuvik home and are a part of the vibrant staff at the local hospital. In accepting an invitation for lunch at their home, I discovered they had another connection to the Redemptorists as Fr. Paul Hansen is a family friend and was a special part of their wedding back in 2010. The world is not so big after all.

Week seven of my Northern sojourn was celebrating the Holy Week services. While the community was smaller than what I was used to down South, these were enjoyable celebrations of Faith, Hope and Love in a community unique in their own character and culture. The people of the Land of the Midnight Sun have won a place in my heart and I look forward to a return experience. The final warm touch was a photo taken by Jon of the three Redemptorists confreres, Jon, Leo and myself connecting at the airport as Jon arrived back home from Paulatuk and Fr. Leo prepared to board his flight south. 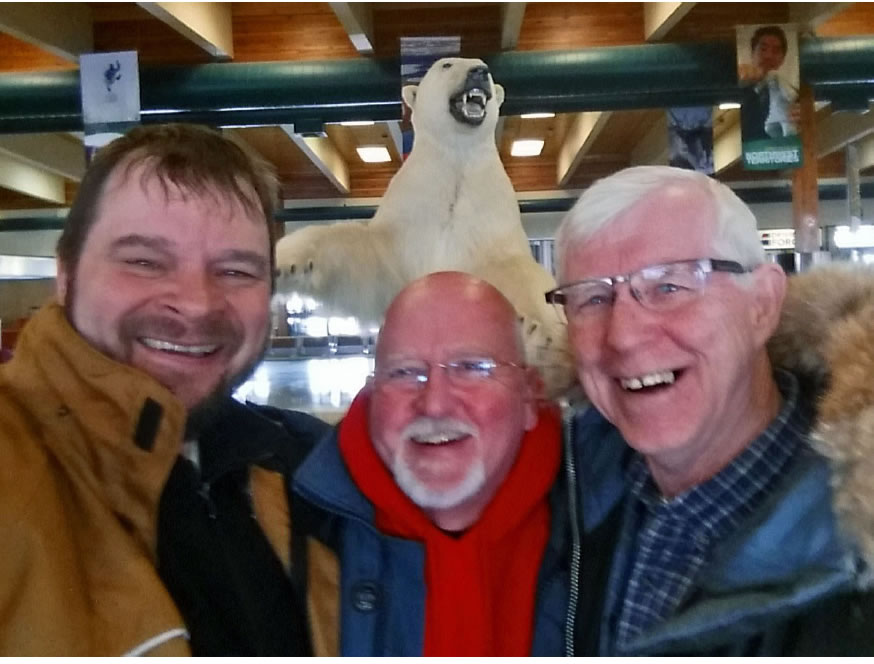 And as I close, I can honestly say, that this has been a rich part of my sabbatical time, a gift from the province for which I am so grateful. I return south enlightened, enriched and blessed by the experience in the Delta Region of the McKenzie-Fort Smith Diocese. This experience has left me thinking that this is a rich mission field that could be inviting us as Redemptorists to expand our own province’s mission charism, reaching out to those most spiritually abandoned communities, like those of the Northern Canadian Church.

Community Connections by The Edmonton-Toronto Province, May 2017 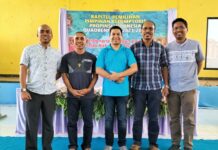 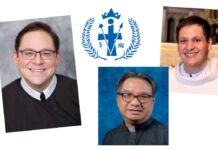