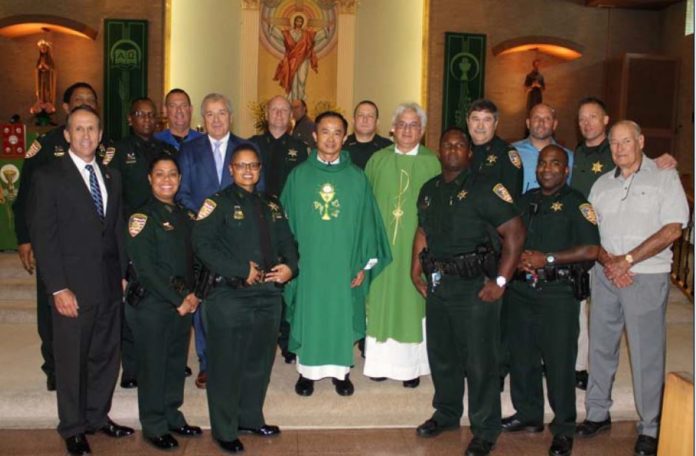 (USA) More than 200 people gathered at St. Gerard Catholic Church in Baton Rouge, LA, USA, to honour the lives of law enforcement officers and first responders lost in the line of duty, as well as support the men and women who serve and protect the community. Former Baton Rouge Police Chief Pat Englade organized the Blue Mass on July 16 – one day before the first anniversary of the 2016 ambush attack and fatal shooting of Officer Montrell Jackson and Officer Matthew Gerald of the Baton Rouge Police Department, and Deputy Sheriff Brad Garagola of the East Baton Rouge Sheriff Department. He said it was a prayer for all of those who respond to emergency situations. It has been a long, painful year in Baton Rouge, a city attempting to heal from decades of racial tension and violence. It has been especially difficult for the families of the slain officers. Ronnie Gerald, father of Officer Matthew Gerald, said his son loved being a police officer and was proud to serve his community. And he served everyone with the same love, respect and honour, according to his brother, Marc Gerald. Both parishioners of St. Gerard, they expressed deep appreciation for the support the family has received from the parish community. They were especially touched when Fr. Chuong Cao, pastor, announced that the Blue Mass will become an annual event. Congressman Garret Graves attended to show his support, and parishioners also welcomed a large group of law enforcement officers, as well as Dis Attorney Hillar Moore, East Baton Rouge Sheriff Sid Gautreaux and Baton Rouge Police Chief Carl Dabadie. District Attorney Moore said that those who gave the ultimate sacrifice to serve everyone – regardless of colour or any other type of division – can never be forgotten. Sheriff Gautreaux said the Blue Mass conveyed the community’s appreciation, and he emphasized that law enforcement is “here to serve.”

Chief Dabadie said the Blue Mass is a step toward a more unified community. “We have come a long way in the last 12 months, but we still have a lot of healing to do,” he said. “A service like this, where we can interact with our community, gives a sense that we are – one and all – part of the same community.”