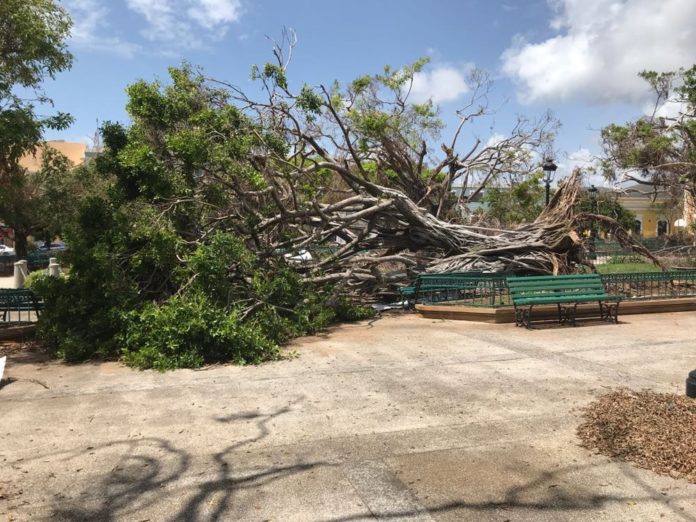 On Tuesday, September 19, the islands that form the archipelago of Puerto Rico began to feel the force of Hurricane Maria, of a magnitude of category 5. On Tuesday night, the strong winds and the rain felt in San Juan. In the afternoon on Wednesday, September 20, we discovered the damage caused by this furious hurricane. The islands that were characterized by the different shades of green in its flora, is now covered by a brown colour. However, we begin to see that from this battered flora springs life with force with a new splendour and greenness.

In Puerto Rico, we were not prepared to receive a hurricane of that magnitude. The bureaucracy of governments adversely affects the distribution of aid that is being received in the country.

Here is a brief summary of what has happened in the country during these days.

COMMUNICATIONS: The hurricane devastated all communication systems. The government of Puerto Rico (police, central administration, municipalities, agencies, state departments) remained without communications with the people. Only a radio station remained in the air. Through the years Puerto Ricans had changed the telephone system to the digital form. Almost all cellular and internet companies lost their antennas and structures. After several days, FEMA (the US agency responsible for disaster relief) began distributing satellite phones to the government. The first distributed phones did not work and the complaint of some mayors is that many phones they s the nt second time did not work when they were needed. Three weeks after the hurricane, we are still not in communication. 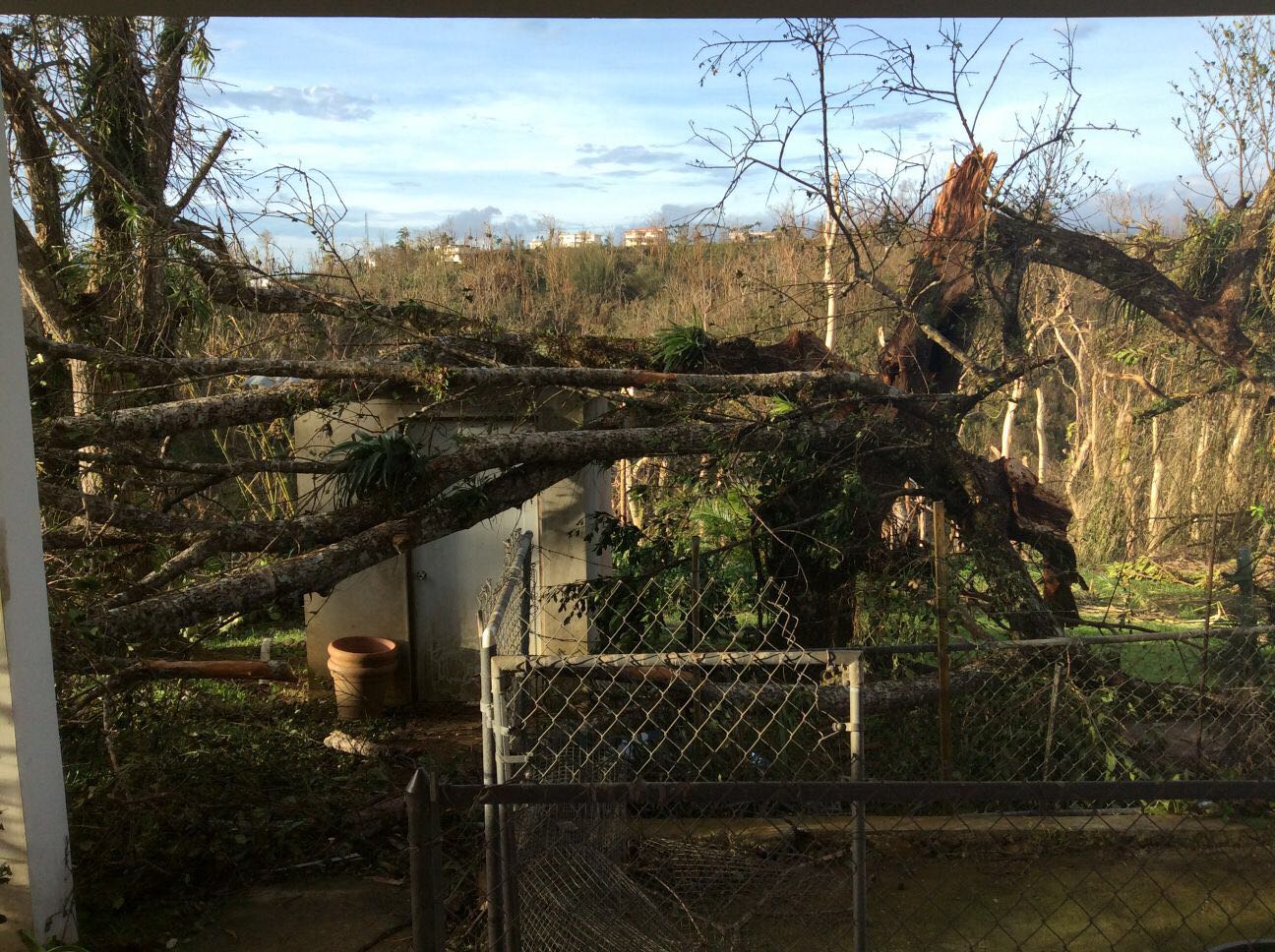 On the highways, we find the posts of the electric line and of telephones. Trees, collapsed roads and dirt hindered transportation. There are villages that are not with any communication. The lack or difficulty in communication has prevented to know the situation in some areas of the country. This situation affects the distribution of aid to those in need as well.

The international airport lost the radars and ruined the control tower. The first days, only military or official flights were allowed to fly in. Little by little, the airport has recovered its dynamics.

WATER AND ELECTRICITY: Three weeks after the event, the government reports that 60% of the population has a drinkable water service. The power distribution system was totally destroyed. The lack of electricity affects the system of aqueducts, hospitals, the airport, ports, etc. Although at this moment the employees of the Electric Power Authority are working, trying to restore electricity, about 95% of the population do not have service of electrical energy.

HEALTH SERVICES: The lack of electricity affected the health services very badly. The government has tried to get electricity to some of the main hospitals. Some of the hospitals have received electrical generators for their operation, although in the first week it became difficult to get the fuel for those generators. In open hospitals there is a great congestion of patients. They many cases such as patients who need to be in the intensive care room have to wait days in the emergency room.

The stagnant waters create the environment conducive to the spread of mosquitoes. This threatens the transmission of dengue, chikungunya and zika. In some municipalities, considerable amounts of people with human scabies, conjunctivitis and leptospirosis are reported.

FOOD: There are tons of food in the ports and in the country’s airport. The bureaucracy of both the US and Puerto Rican government has made it difficult for the people to get the supplies. The coordination of how to get these foods to the needy has been deficient. Poor people receiving government food assistance used a debit card. Due to the lack of electricity and that banks do not have ATM / ATM system have not been able to access the purchase of food. Almost everything has to be paid in cash.

The lack of electricity makes it difficult for supermarkets, food businesses to offer their services. There are long lines of people looking to get food for their families.

HOUSING: The government has reported that more than 250,000 homes were lost during the hurricane. We find families living in houses with no roofs. The shelters are a temporary structure with capacity to accommodate people for several days. As time passes, the situation of refugees is complicated.

EDUCATION: Several of the schools in the public system were damaged. Other schools are used as shelter. It is expected that at the end of October the school semester will continue. Redemptorist schools or those associated with a contract with us have already begun offering classes, offering support and services to students and their families.

EMIGRATION: During the last years the phenomenon of the emigration of Puerto Ricans to the United States has occurred. The conditions in Puerto Rico have encouraged some to contemplate the possibility of emigration in search of jobs, health services and education for the children. In some cases, children outside of Puerto Rico have sought ways for their aging parents to move (even temporarily) to the states. 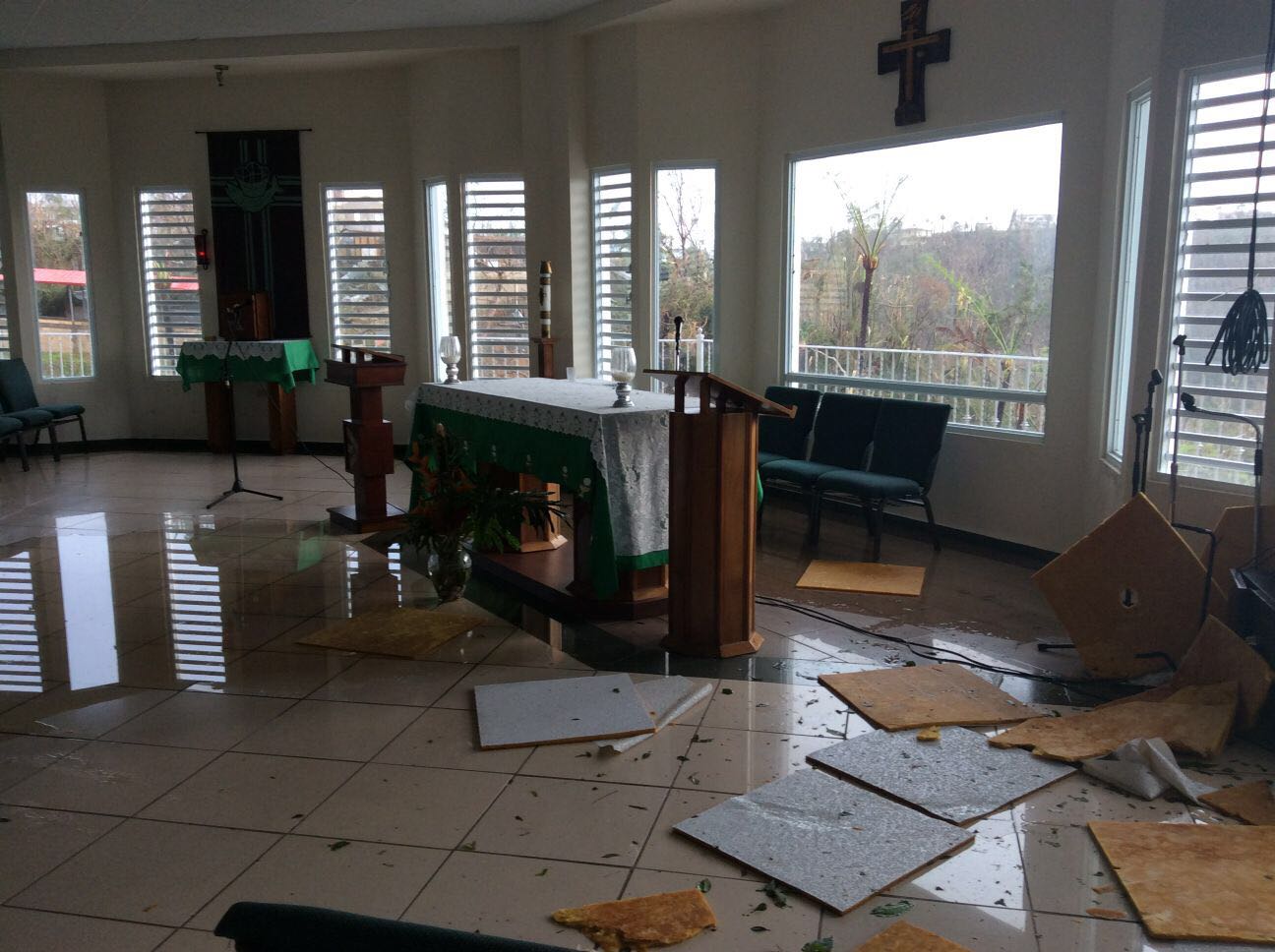 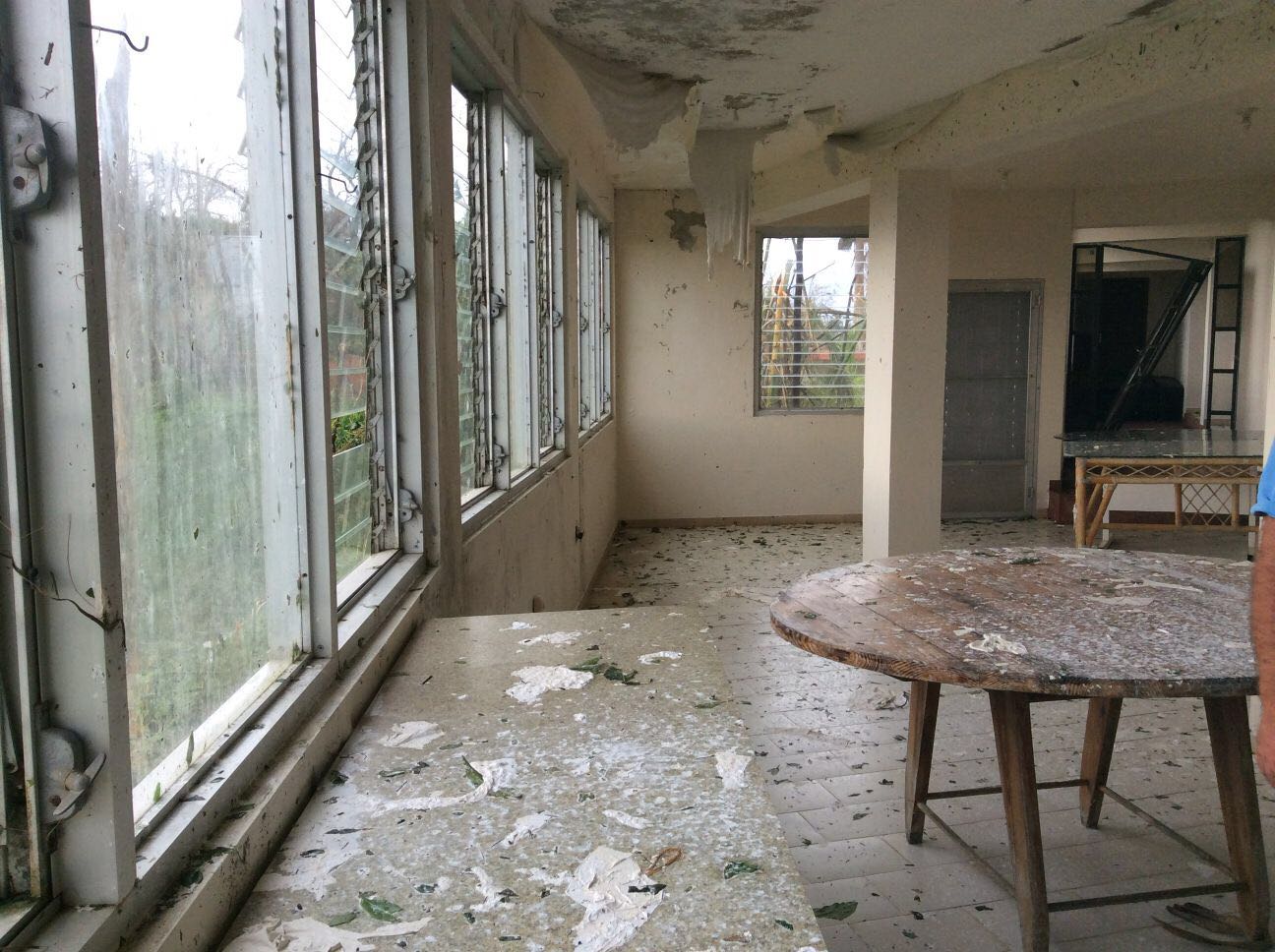 PUERTA DE TIERRA:
The Puerta de Tierra sector has suffered great damage. Some businesses were vandalized or looted at different times. Like all of Puerto Rico, we are without electricity or communications. Our community of San Agustín suffered damages in the house of the community, in the church, and the other buildings. The water penetrated all the rooms of the house ruining the furniture, the wind blew some of the windows and windows of the house. The community room is destroyed. Two of the gates at the Church entrance were brought down. Several stained glass windows were broken (including that of the Holy Redeemer).

GUAYAMA:
The town of Guayama is devastated. From the majestic square there are crooked and broken trees. Most wooden houses are on the ground. Some of the parish chapels were damaged. The Redemptorist community has maintained solidarity with the population, offering services and facilities for the needs of the people.

SAN LORENZO:
In San Lorenzo the communication between the neighborhoods is hampered by the amount of electric posts and trees on the roads. Some chapels suffered damage to their structure

AGUAS BUENAS:
Three Kings Parish: In the parish some chapels were affected. The municipality was not in communication with the communities. In the field the trees are fallen down and the roads are collapsed.

The Christ the Redeemer House: Our House Christ the Redeemer (retreat house) suffered damages on some roofs of the buildings. The old novitiate of the province had considerable damage. Many of the trees fell. The Redemptorist community with a group of laymen have been working in the House with the hope that by October 15 the facilities will be hosting people and students to participate in the activities.
St. Alphonsus Academy: The buildings of the St. Alphonsus Academy were greatly affected. However, the faculty and some parents worked hard to start classes last week. 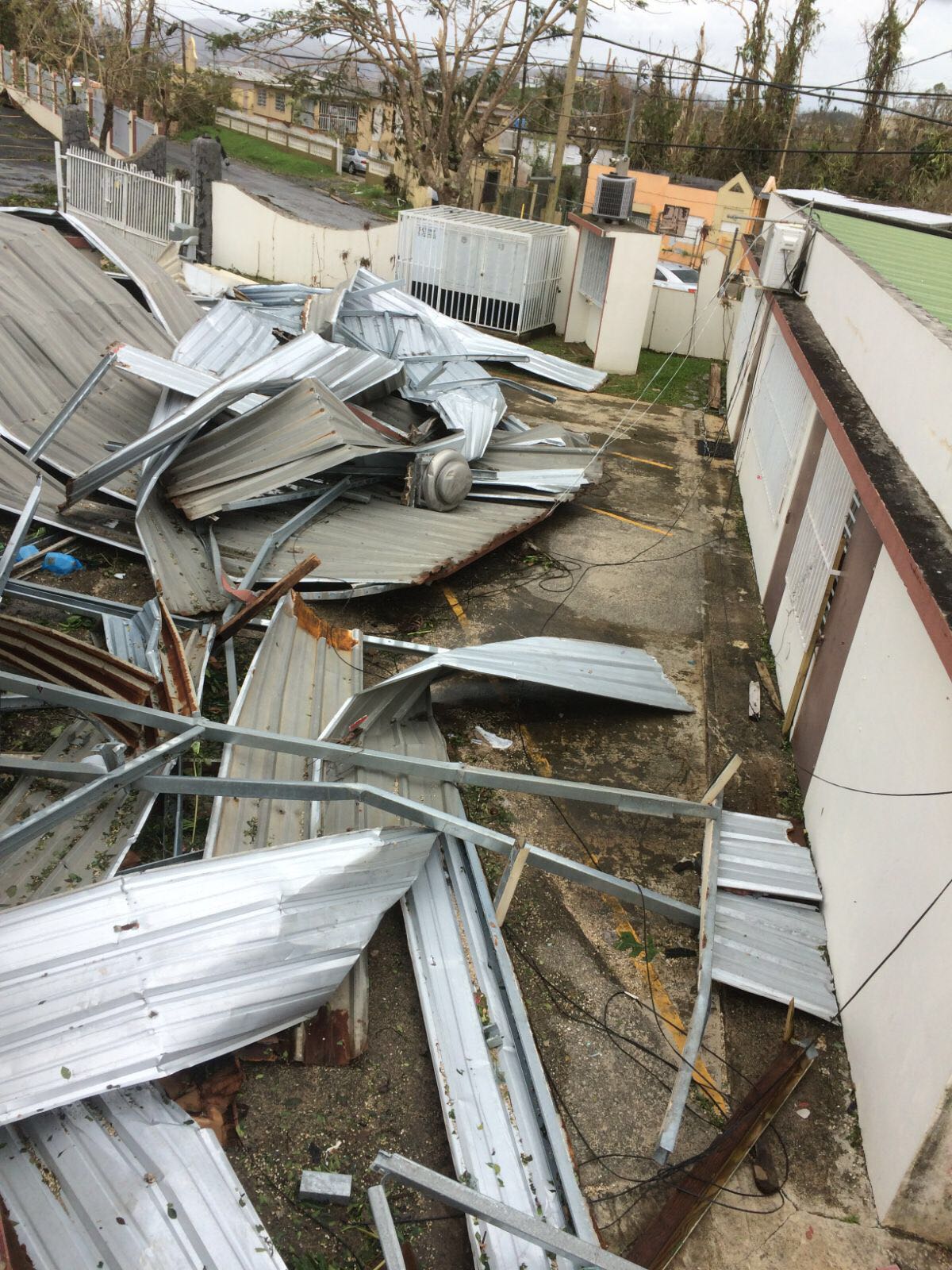 The Redemptorists are in the midst of the people, giving testimony of the Redeemer with hope and solidarity, as the Puerto Ricans assume the reconstruction of the nation. During these days we have witnessed the people who are fraternal, hardworking, generous and supportive. Puerto Rico is renewed as a plant that is pruned, with greater vigour, greater capacity to give the best fruit.