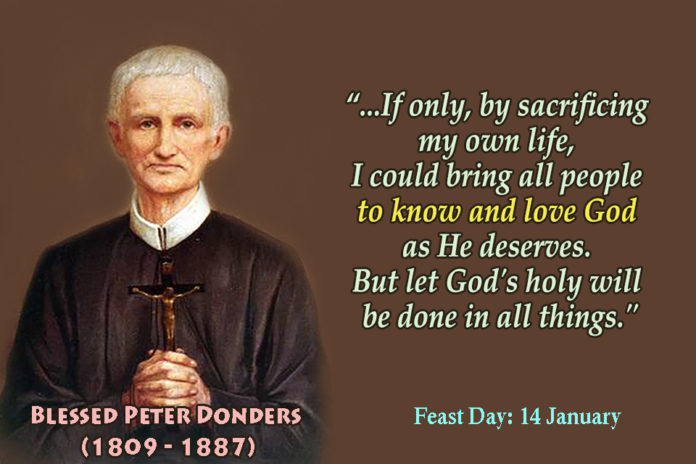 Father Peter Donders was born in Tilburg, Holland, on 27th October 1809 of Arnold Denis Donders and Petronella van den Brekel. Because the family was poor, the two sons could be given little schooling but had to work for the support of the home. From an early age, however, Peter had formed the desire of becoming a priest. Eventually, with the assistance of the clergy of his parish he was able at the age of twenty-two to commence study at the Minor Seminary. In due time he was ordained priest on 5th June 1841.

He was able to follow his missionary vocation, setting out for Surinam, which was then a Dutch colony. He arrived in Paramaribo, the principal city of the colony on 16th September 1842, and applied himself at once to the pastoral works that were to occupy him until his death. His first duties included regular visits to the plantations along the rivers of the colony, where he preached and ministered the Sacraments mainly to slaves. In 1856, he offered himself as a volunteer for the government leprosarium of Batavia, where he remained, with the exception of a few short intervals, for the next 28 years, caring for the residents bodily and spiritually. When the Redemptorists arrived in 1866 to take charge of the mission of Surinam, Father Donders and one of his fellow priests applied for admission into the Congregation. The two candidates made their novitiate under the Vicar Apostolic, Bishop Johan Baptist Swinkels, and they took their vows on 24th June 1867. As a Redemptorist, he now turned his attention to the Indian peoples of Surinam. He began to learn the native languages and to instruct the Indians in the Christian faith, until failing strength compelled him to leave to others what he had begun.

Weakening health finally confined him to bed in December of 1886. He died among the lepers, poor among the poor, on 14th January 1887, mourned as their benefactor and invoked as a saint. Pope john Paul II beatified him in St. Peter’s on 23rd May, 1982, during the 250th jubilee year of the Congregation of the Most Holy Redeemer. “Come, you that are blessed by my Father,” says the Lord, “I was sick and you visited me. Truly I tell you, just as you did it to one of the least of these, who are members of my family, you did it to me.” (Mt 25:34, 36, 40) 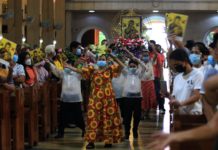 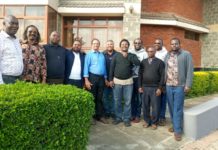