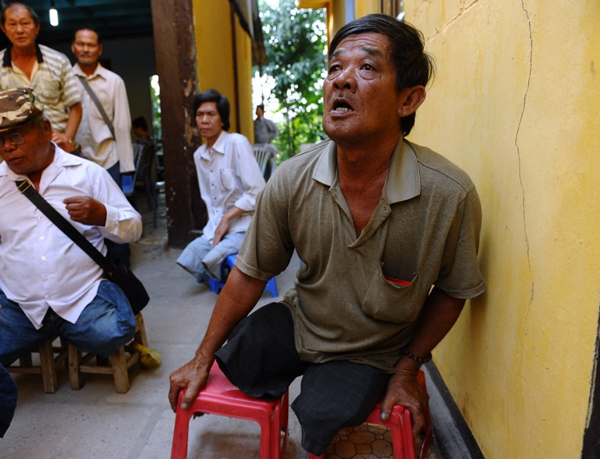 (Ho Chi Minh City, Vietnam) – On feast days for the Lunar New Year, the Redemptorist Fathers of Saigon launched “Forever together, with the hope and expectation of war veterans “, a solidarity initiative aimed at the Vietnamese southern soldiers’ survivors of the ’55 -’75 conflict.

These are fighters from the former Republic of Vietnam, pro-American, defeated by the North Vietnamese army which reunified the country in 1975. The communist government of Hanoi has forgotten, if not abandoned, these 20 thousand soldiers who have suffered serious injuries in the battle and who today are unable to earn a living and for this, they are forced to beg in the streets of the metropolis.

In the days when the whole country is preparing to celebrate the Tết [New Year’s Eve], the parish of Lộc Hưng has set up a shelter for 13 homeless war veterans, abandoned by society. On February 13th, Fr. Vincent Pham Trung Thành, former superior general of the Redemptorists, celebrated a mass attended by veterans and faithful of the community. At the end of the service, the priest distributed gifts and “new year money” to the new guests of the parish.

Among them is Mr. Lâm, 72, who tells: “In 1972 I fought on the battlefield of Pleiku. My wife and children came to see me but all died. In the same year, I was wounded. For 42 years, my comrades and I lived a miserable life, but the Redemptorist fathers helped us. This society gives nothing. I was desperate, I cried a lot. Now I’m old, I have no relatives and no home in which to live. But today I am part of the Lộc Hưng community “.

Another veteran, named Phạm Thế Hùng, declares: “I lost a leg in the battlefield of the province of Bình Dương. My friends and I were invited by the Redemptorist Fathers of Saigon. Last year, we met very often at their church. I cannot express my feelings now. Every time we come here, the priests help us with a little money. Even if it’s not much, I can buy rice for 10 or 15 days. We are grateful to the benefactors, at home and abroad, who have helped us. We thank you sincerely “.

Over time interreligious groups and leaders of different faiths have tried to soothe the wounds and devastation that have divided and bloodied Vietnam. The Redemptorists have for years been engaged in beneficial programs for veterans and in the past have collaborated with the Buddhist pagoda of Liên Trì run by Abbot Thich Không Tánh, who in 2013 left the management of initiatives in the hands of the Catholic congregation.

Fr. Đinh Hữu Thoại tells AsiaNews: “It was once the pagoda that organized them. However, the veterans faced many difficulties, as the police prevented or stopped them from going to the Buddhist temple. When the monks held meetings, policemen and thugs arrived to disturb them. Thus, the venerable Thích Không Tánh asked for help from the Redemptorists of Saigon to support the veterans of the Republic of Vietnam. To date, the Redemptorists have been dealing with it for six years”.

Since 2013, priests have regularly organized the program “Gratitude for South Vietnamese veterans” and other initiatives for health care and spiritual support of over 6 thousand veterans, 3,500 since 2017. They are beneficiaries of health insurance, cash donations, gifts and free tickets to reach Ho Chi Minh City from nearby provinces. Together with the priests, doctors, nurses and volunteers they encourage, comfort and take care of them. Most veterans are Buddhist or follow ancestral worship, but some of them have become Catholics. “The Fathers and the Church of the Redemptorists love us and take care of us”, they say. Since their conversion, they all wear rosaries and pray to Our Lady of Perpetual Help, to whom the parish of the Redemptorists is dedicated.