(Madrid, Spain) – The Extraordinary Assembly of the Province of Madrid began with the general government on Monday 22nd January, in the community of Félix Boix, Madrid. The Superior General of the Congregation, Fr. Michael Brehl, Brother Jeffrey Rolle (General Consultor) and Fr. Johannes Römelt (Coordinator of the Conference of Europe) were present to animate the assembly on behalf of the General Government. The Provincial Superior of the Province Fr. José Luis Bartolomé, and 45 representatives of almost all the communities and the couple Antonio Izquierdo and Ana Ma Osorio representing the lay Redemptorists took part in the assembly.

On 22nd January at 4:15 pm, sessions began with the presentation of each of the participants.January 23rd was a day of the retreat. The reflection focused on the theme of the Sexennium. From the second day, January 24th, the presentation, analysis and reflection on the decisions of the General Chapter were scheduled. Restructuring, the fundamental theme of the Chapter, requires above all to reanimate the charism: to evangelize the abandoned, especially the poor, with missionary dynamism (Const.1). The apostolic community is that which carries out the mission: “We are one single missionary body” (Const 2). It is necessary to inflame a new availability for the mission. To improve it, a new style of community life is proposed. 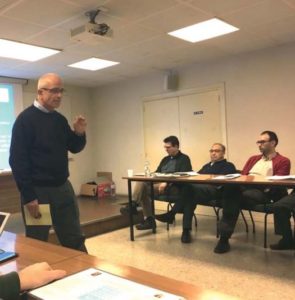 A concern of the Chapter was human and spiritual formation, the promotion of the teaching of Moral Theology as a priority and the restructuring of the Alphonsian Academy.
The Chapter considers the pastoral care of vocations a real priority. The restructuring involves all the levels of the Congregation. The exercise of solidarity at all levels, especially with the poor, must be promoted throughout the Congregation. In this area, solidarity with Africa and Madagascar has the predominance. The general government intends to offer a manual of financial affairs.

These days of assembly were days of intense and responsible work. We have become even more acutely aware of the challenges ahead of us, many of which compromise our future.
We hope that this commitment and missionary concerns will lead to concrete resolutions on pastoral and community activities and also to greater fidelity to the Gospel and to our charism.

Antonio Danoz, CSsR.
N.B. you can find the full article in our Spanish version of the news.