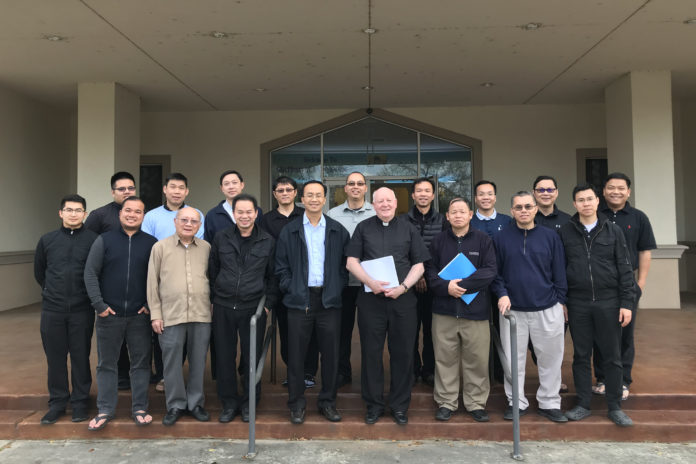 (Houston, United States) A workshop on authority, obedience and leadership was held in the Provincialate and Retreat Centre of the Vice Province of Extra Patriam in Houston, Texas. It was facilitated by Fr. Ronnie McAinsh, C.Ss.R.

The Vice Province remains one of the more vibrant Units of the Congregation in the West, with 11 students in philosophy and another 11 in theology, as well as a novice who is from  Lipa in the Philippines. It also has apostolic centres in Nevada, California and Texas, as well as outreaches in the Czech Republic, Canada and in the Caribbean. It has parish and shrine ministry, and a radio outreach, they continue to conduct parish missions.

Extra Patriam was specifically created to work with the Catholic Vietnamese people who had fled to the United States after the fall of Saigon in 1975. However, over the years, the work of the confreres has expanded, and they now work in partnership with the Conference of North America as well as many dioceses.

The confreres from all the communities were present at the workshop and also the theology students. The topics such as authority, leadership within the Congregation and in our parishes and government, were discussed.

Other areas such as the dignity of the human person, the ability to dialogue and negotiate, confidentiality, boundaries, and quality communication, as well as freedom from prejudices, were all freely explored.

Whilst discussing leadership, the confreres also looked at the ability to listen, the difference between being a manager and a pastor, the essential attitudes of transparency, openness, vulnerability and a willingness to share – and of course, the need to be able to ‘think outside the box’.

The workshop was supported by the daily community prayer and concluded with the closing address of the Vice Provincial, Father Dominic.

The attached photograph shows some members of the group with the facilitator and the Vice Provincial.