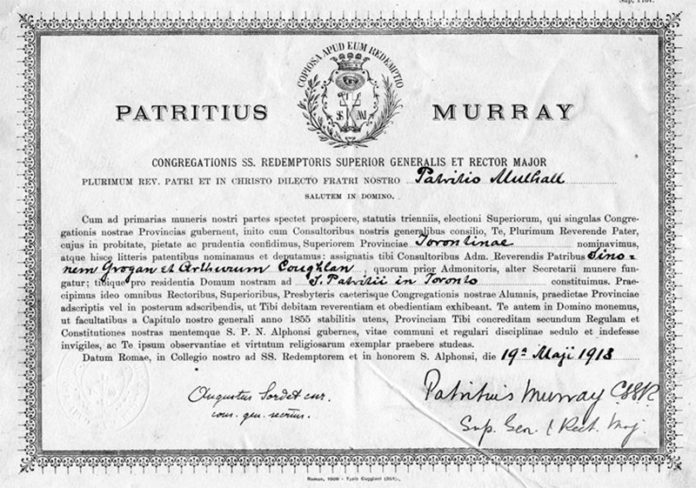 (Toronto, Canada) Rector Major Fr. Patrick Murray signed the rescript in Rome, canonically establishing a Canadian province for English-speaking Redemptorists under the name of the Toronto Province on May 19, 1918. In a letter to Vice Provincial Fr. Patrick Mulhall, Fr. Murray extended congratulations:

The Toronto Province on its erection, on its having the same birthday as the Holy Church. We can have every hope that the Holy Ghost will always remain with it and enable it to do great things for the English-speaking Canadians. I congratulate yourself on being the St. Peter of the new Province, and I know that you will work for the new Province with the zeal of St. Peter, and I feel sure your work will be blessed.

The historic day was hailed in a Toronto newspaper “as one of the most important changes in the conduct of the Roman Catholic parochial affairs and mission work … to separate all of their houses in Canada from those in the United States, making of Canada a distinct Province with headquarters in Toronto.”

On June 17, almost a month after the rescript was signed, the chronicler at St. Augustine of Canterbury in Brandon, wrote:

Today will ever be a memorable one for Canadian Redemptorists. A large blue envelope came in the mails, containing the triennial changes. Paramount was the document announcing the erection of the Canadian Province of Toronto with V. Rev. Fr. Mulhall as provincial. This news awaited with anxiety for some time was hailed with delight by all.