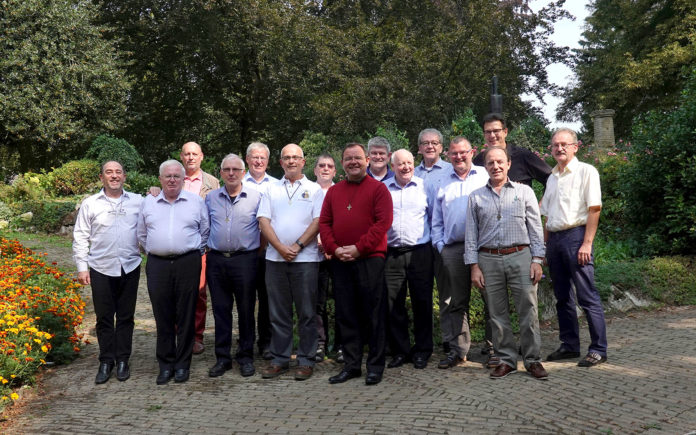 (Wittem) From September 3d to 5th in Wittem (Province of St. Clemens) the provincial governments of Dublin, London, Vienna-Munich and St. Clemens met, together with the Superior General, Father Michael Brehl, the General Consultors Father Pedro Lopez and Father Alberto Eseverri and the coordinator of Europe, Father Johannes Römelt.

They looked back at the five assemblies or extraordinary visitation in North Europe and responded to the results of these meetings. They also communicated their concerns, intentions ideas to the commission that will prepare the plan for apostolate and restructuring for the conference Europe.

P. Römelt gave an overview of the progress that the Conference Europe has made with regard to (among other things) formation, pastoral and international cooperation. Father General could widen the outlook by bringing in impressions from other conferences.

There was unanimity about the necessity and urgency to take steps towards further cooperation in the region – at multiple levels and areas. Bottlenecks were named realistically. There were also hope, joy and the willingness to get to know each other better. Decisions were not taken. The impression, however, was that the conversation about priorities and cooperation enters in a new, less non-committal phase. Change processes need time. On the other hand, time must also be used properly and efficiently, so was the mood. From now on, concrete steps must be taken.

The meeting especially was useful and helpful for the commission that will draw up the plan. It helped this commission to go into a next phase and to work on a draft document for the conference in October.