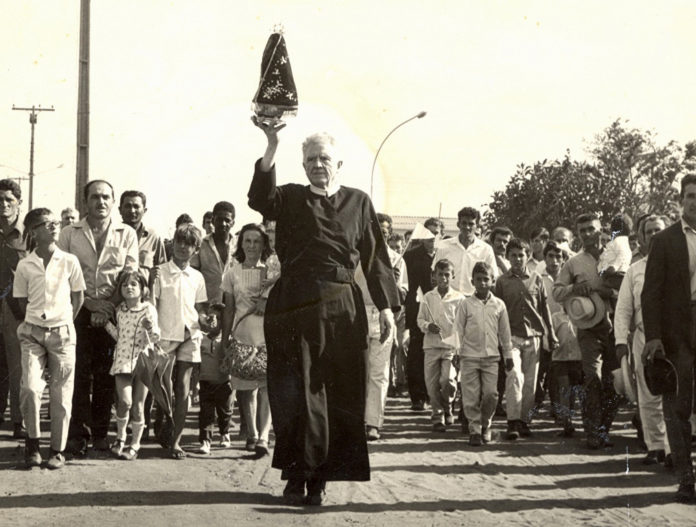 (Aparecida, Brazil) The love of Father Vítor Coelho to the Virgin Mary accompanied him throughout his life. As a Redemptorist Missionary, Father Vítor inherited this devotion from his founder, St. Alphonsus.

The devotion to Our Lady was the strength of her personal piety and her pastoral zeal. In the land of the Patron of Brazil was that the missionary can transmit his message in a particular way. So much so that he is called “Missionary of Our Lady Aparecida”.

Fr. Vítor arrived in Aparecida on April 5, 1948, and stayed there until his death on July 21, 1987. In these 39 years, he dedicated himself to Radio Aparecida and the National Shrine.

His coming came just after a long period of illness. The very friend and missionary Father Antonio Pinto de Andrade, who was then the rector of the Shrine, wrote that the missionary came “completely restored, full of strength to continue to work in the Lord’s month.”

In fact, Father Vítor spared no effort to approach the pilgrims and those who listened to him on the Radio, at the Altar of Aparecida or on the journeys in which he carried the image and manifested his love and devotion.

In an article published in the Santuário newspaper in 1950, he talks about the image with special predilection. “Is not the meaning of the Image of Our Lady of Conception Aparecida admirable? Great exaltation, which elevates and deepens us with holy reverence. Humble ‘baseness’, which fills us with confidence. The extreme depths of God’s mercy and human misery are reflected there. The ‘full of grace’ appears as ‘Mother of divine grace’. The Church declared Our Lady Aparecida the Patroness of Brazil. What the Church binds on earth would not be turned off in heaven. “

In the National Shrine of Aparecida, the vivid and tender word of the missionary meant that, after Our Lady, the pilgrims wanted to see Father Victor.