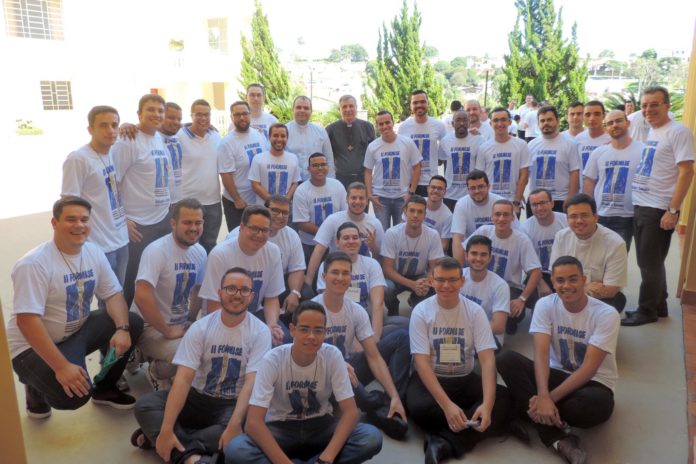 (Guaxupé, Brazil) The Second Missionary Formation for the Seminarians (MIFORSE) of the Ecclesiastical Province of Pouso Alegre, formed by the southern dioceses of the state, took place in the city of Guaxupé (MG) of Minas Gerais Pouso Alegre, Campagna and Guaxupé from 8th to 12 of March.

The meeting, led and assisted by Father Antonio Niemiec CSsR, addressed the theme chosen by Pope Francis for the extraordinary missionary month, which will be held in next October: “Baptized and sent: The Church of Christ on a mission in the world”. Formation counted on the participation of all the seminarians of the province, between the propaedeutic and the seminarians of the phases of philosophy and theology. The rectors and formators of all the phases were present at the meeting, in addition to the bishops of each diocese.

Dom Magellan, the archbishop of Pouso Alegre, opened the meeting with a Mass celebrated in the Guaxupé Cathedral highlighting the need for the ecclesiality of the mission, calling attention to the unity in the diocese and the province and the care for those vocations towards the priesthood that they believe that the mission is done alone. Bishop Lanza, bishop of Guaxupe, was present during the meeting. In the Mass celebrated on Saturday, he highlighted the question of the missionary formation of seminarians and the need to open the students to this reality which cannot be an appendix of formation, but the understanding of the essential dimension of the mission.

During the meeting, Don Antonio presented the proposals for the realization of the extraordinary Missionary Month and the apostolic letter “Maximum Illud” of Pope Benedict XV and the influence of this document in the magisterium of the Church before and after the Second Vatican Council.

A special moment of the meeting was the cultural evening in which seminarians and trainers were able to watch a musical concert presented at the Municipal Theatre of Guaxupé. The musical entitled “Pilgrimage: the lament of the imperfect” introduced a version for the meeting of the image of the Madonna Aparecida, focusing on the formation of the Brazilian people subjugated by the colonization and exploitation of indigenous and black populations.

The 2nd MIFORSE concluded with the Mass presided over by Don Pedro Cunha, the bishop of Campanha, who highlighted the importance of prayer and the spirit of communion with God so that the mission is given as a work of God’s grace rather than a service of self-promotion.

With the expectation of the next meeting to be held in 2021 in the diocese of Campanha, 107 seminarians present in this MIFORSE were able to nurture a constant missionary training course, in order to provide priests with the Southern Church of Minas Gerais missionaries, baptized and sent, to announce the person of Jesus Christ and His work of love.