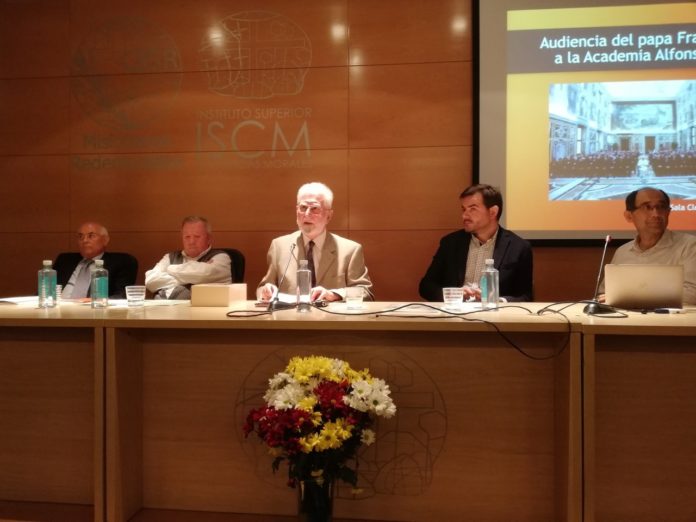 (Madrid, Spain) A round table entitled: “The Alphonsian moral heritage and Pope Francis” was held at the ISCM on 24 May. As is well known, on February 9, 2019, Pope Francis received the Alphonsian Academy in Rome in the audience to celebrate the 70th anniversary of its foundation (1949-2019). On this occasion, the Pope gave a commemorative speech, recognizing and thanking this Redemptorist institution for its ecclesial task in the field of Christian morality. At the same time, he encouraged the institution to carry out with enthusiasm and “without fear” the updating of Christian morality, which the Church and our society need. 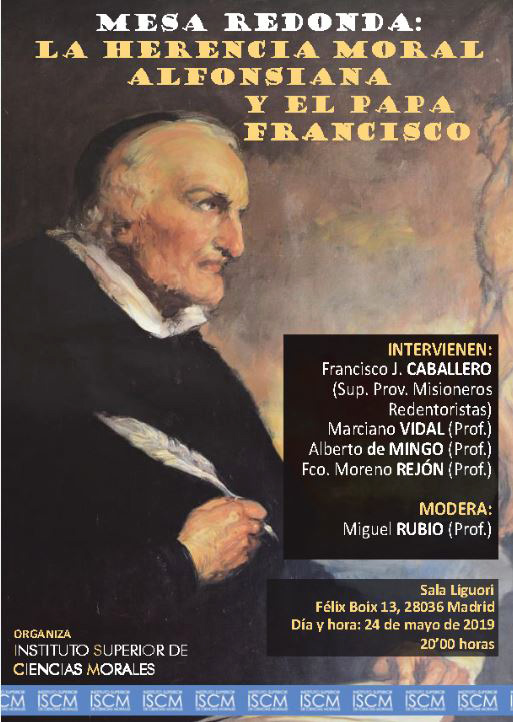 The words of Pope Francis touched all the Redemptorists, and also, in particular, the Institute of Moral Sciences (ISCM abbreviation in Spanish), more explicitly engaged in the task of deepening, updating and spreading the moral, a task that on the wake of St. Alphonsus, there was a specific theological area within the ecclesial panorama. For this reason, the ISCM has decided to hold this round table to resume the event and the task of Pope Francis for the future, as well as to show our work within the current panorama of Christian morality in the Church, in the Congregation and especially in Spain.

To this end, the composition of the round table and the contributions of its speakers explained and reflected on some of the highlights of the Pope’s speech, as well as the figure of Pope Bergoglio, the meaning of St. Alphonsus in pontifical teaching, the panorama of Moral science in Latin America, the history and the presence of ISCM.

During and after the event, the large audience that filled the Liguori Room responded with repeated signs of approval to the development of the meeting. The director of the ISCM, Prof. Miguel Rubio, was the moderator, who introduced the meeting recalling the event and the reasons that summoned us; after a brief review of the evolution of ISCM and its activities, especially in recent years, it has given the floor to the speakers.

Prof. Alberto de Mingo was the first speaker, who, as a visiting professor at the ISCM and the Alphonsian Academy, was present at the hearing. Based on the projection of a series of photos obtained during the meeting of the Alphonsian Academy with the Pope, he summarized the various moments of the hearing; highlighted the observation of a nearby Pope, who wanted to personally greet each of the members of the group.

Professor Francisco Moreno Rejon, a student of ISCM and AA (Alphonsian Academy) in his formative years and later a teacher and missionary for many years in Peru, then presented to the floor. He presented an aspect of Pope Francis, considering his “landscape” – the circumstances that characterize his personality as bishop-cardinal and pontiff – and then making a long list of the “pastoral characteristics” of the Alphonsian style; at the end of his presentation, he retraced the panorama of moral theology in recent years in the various countries of Latin America.

Then follows the intervention of Prof. Marciano Vidal, for many years a professor at ISCM and of the AA, whereas a student of Fr. Haring, he obtained his doctorate in one of the most fruitful periods of the Academy. Marciano traces a detailed framework of reflection, which focuses on three denominators: the meaning of the meeting of the AA with Pope Francis and the importance of his speech; the presence and absence of Alphonsian thought in the teaching of the Popes, before and after the Second Vatican Council, in the field more properly of our congregation and on the horizon more than the universal Church; an optimistic and hopeful final balance,

At the culmination of the Round Table, the Provincial, Francisco J. Caballero, spoke with precise consideration of the most significant steps that have marked the history and evolution of ISCM. After recalling the embryonic beginnings of the beginning and some of the most important milestones of its trajectory to date, it supports the patrimonial-cultural and theological-moral importance of many current ISCM assets such as its precious library together with a newspaper library which contains the most important list of journals linked to the world of morality and the magazine Moralia, the official body of expression of the professors of the ISCM and platform of moral thought for other moralists, in particular of the Spanish-speaking world. His speech ends with a firm commitment to the future,