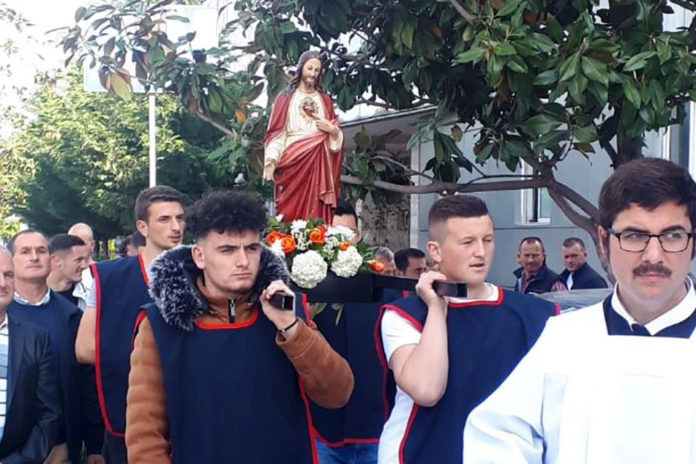 (Kamëz, Albania) The Parishioners of St. Alphonsus Parish took the Risen Christ in procession through the center of Kamëz on Easter Sunday. This statement made in Spain would not have much relevance due to the normality with which, as in my country, the processions are held. But in Albania the procession is not very common, in fact, this was the first time in the history of the Parish of St. Alphonsus of Kamëz.

The fact that it was the first event meant that we had to prepare it from scratch. We did not have a step or a cart with which to carry the Risen Lord. Obviously, we did not have a guild or any other means. But that did not bother us. With the help of a young catechist of the parish and his family, we built a step (a boat) using some metal bier. We fixed the images of the Sacred Heart of Jesus that are usually in the confessional and decorated them with the flowers collected from the homes of some parishioners. When Easter Sunday arrived, we had prepared the image of the Risen Lord to go out in procession. Along with the image of the Risen Lord, the statue of the Virgin Mary, the mother of Jesus was taken in the procession. 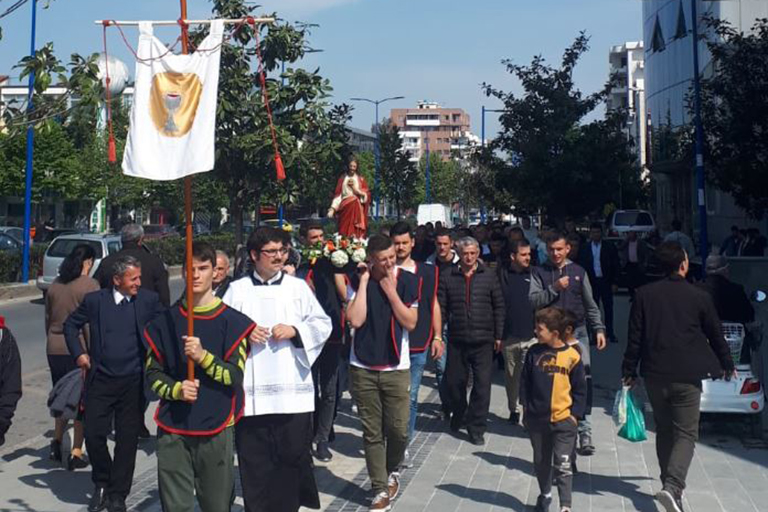 On Sunday morning, the young animators of the Choir group were called to carry the images on their shoulders. There were not many of them to carry. Thus, we counted on the help of several catechumens who would receive their baptism on that same Sunday, but before being born to the life of the faith they had the joy of carrying on their shoulders the Risen Jesus and the Most Holy Mary, his mother.

In spite of the impediments and the difficulties, since, in addition, the city council decided that same day to place a crane at the entrance of the church to clean the windows of the Palace of Culture, we were able to conclude our procession before time. We divided men and women; primarily to accompany the Risen One to meet His Mother, the second would accompany Mary to see her Son. In the center of the Square of Kamëz, as ended our procession, the Risen Lord was with his Mother surrounded by an excited Albanian town to people were very emotional at the meeting of Jesus and Mary, our mother. 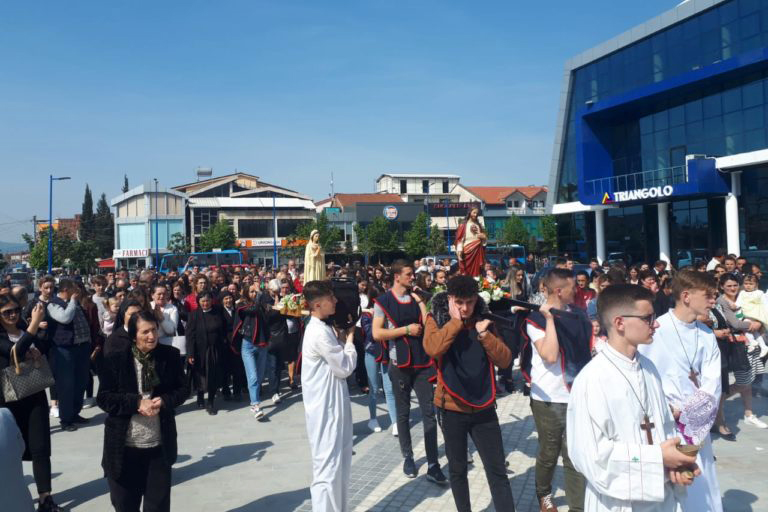 The Redemptorist community that looks after the parish in Albania consist of two priests and a student who beautifully carried out the Holy Week services. The services were telecasted in the Albanian television. The people too attended in great number at the Pedro Donders Center who prepared some paschal lamb cakes to sell at the entrance of the Cathedral of Tirana. It was a memorable Easter celebration and we look forward to carrying out the tradition to live the faith more meaningfully.