(Taungngu, Myanmar) A Redemptorist from India, Rev. Fr. Anthony Vincent, C.Ss.R., preached during the Annual Diocesan Priestly Retreat of the Diocese of Taungngu in Myanmar. The retreat was held in the Diocesan Center of Taungngu, Karen State last November 26 to 30, 2019. This was participated by all diocesan clergy of the whole diocese. With its theme, “You Did Not Choose Me but I Chose You,” (Jn 15:16) the yearly gathering aimed to reawaken the gift of priestly vocation and ministry of service among the priests in the whole diocese.

During the retreat, Fr. Anthony Vincent shared with the diocesan clergy insights on the following topics: Stories that Shape Our Lives, Dignity of Priests, Eucharistic Priest, Meaning of the Mass, The Priest with a Beautiful Hands, What is Wrong with the World, Seven Capital Sins, Preparation for Confession, Ministry of Preaching and Evangelization. He started his four-day journey with his brother priests by an introductory sermon and ended by giving some pastoral tips. He also delivered the homily during the Chrism mass in the Cathedral on the first of December.

The retreat program was designed to provide a meaningful experience to all the participants. It started in the evening of November 26 with the introductory sermon and evening prayer. The retreat activities included common prayers, Eucharistic Celebrations, sermons, personal reflections, Holy Hours, meditations, examination of conscience, confession, spiritual readings, common rosary, and social functions. The gathering also included Chrism Mass, an Hour of Adoration, Te Deum, Papal Blessing and Mass for the deceased missionaries. 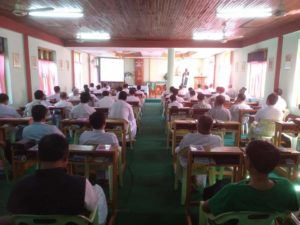 Rev. Anthony Vincent, C.Ss.R., is a member of the Congregation of the Most Holy Redeemer (Redemptorists) in India. He was born in 1952 and ordained priest 1979. As a Redemptorist missionary, Fr. Vincent is a well experienced and full-grown preacher. He is actively involved in preaching ministry of the congregation. He facilitates retreats to various groups such as priests and religious, medical patients, students and many others. He was also sent to do mission works abroad such as in Oman and parish preaching in Singapore and Malaysia. He became parish priest in various parishes for twelve years. He was a formator, a former provincial consultor and superior. He was also active in music ministry. He conducted Indian music vocal trainings and was able to produce seventy cd productions in ten years. He also appeared in eighty-five television programs in India.

The Diocese of Taungngu is situated in Karen State, Myanmar and headed by Bishop Isaac Shwe Oo, D.D. It is composed of twenty-two parishes with sixty-eight priests. There are approximately forty-three thousand Catholics in the whole diocese, about one percent of the total population.