The bicentenary of the death of St. Clement M. Hofbauer was the occasion for Fr. Paolo Saturno CSsR to compose a hymn in honor of the Saint who transplanted the Congregation of Redemptorist Missionaries beyond the Alps.

The hymn, of which Fr. Paolo is the author of the poetic text and the music, consists of a refrain and seventeen verses through which the human and spiritual story of our St. Clement unfolds.

The music is immediate and direct, written, like the Alphonsian-Redemptorist songs, with the intention of evangelization and with the possibility of being sung easily by the whole assembly of the faithful.

You find here the complete text (Italian)  and the score for voice and piano/organ. 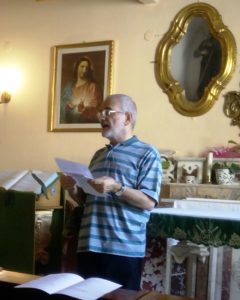 For decades Fr. Paolo Saturno has been working, through concerts, liturgical animations, and recording, to spread not only the musical repertoire of St. Alphonsus but also the Alphonsian-Redemptorist tradition, especially in the Neapolitan Province.  To tell the truth, his tireless work has been supported by the great Maestro and Composer, the late lamented Fr. Alfonso Vitale CSsR: together the two Brothers gave birth to the Polyphonic Alfonsian Choir and the Alfaterna Orchestra that with more than 25 years of activity have preserved the memory and reinvigorated the diffusion, not only in Italy but also abroad, of the songs that our Holy Founder and the Brothers have handed down to us.

Fr. Paolo Saturno and Fr. Vitale have also strengthened the musical repertoire by composing new works in line with the Redemptorist tradition, such as, for example, the Cantatas for soloists, choir and orchestra elaborated by Fr. Vitale using the cultured and popular musical themes of St. Alphonsus (Duet between the Soul and Jesus Christ and the Canzoncine), or the numerous new songs written by Fr. Vitale. Vitale, Fr. Saturno, but also by other pro-Floalfonsian composers on the input of the above-mentioned fathers on poetic texts of contemporary or past Brothers, or on texts written by Fr. Vitale and Fr. Saturno themselves.

Fr. Paolo has long caressed the idea of writing hymns for educational and popular purposes. These hymns have the cultural and didactic intent of making the life and deeds of the Redemptorist Saints known simply and directly to most people: St. Alphonsus, St. Gerard, St. Clement M. Hofbauer and St. John Neumann.

Thank you, Fr. Paolo! We know that your workbench is always ready to compose other hymns in honor of our Saints: Alphonsus, Gerard, John Neumann. With these sweet melodies of yours, you allow us to raise to the Lord praise and thanksgiving for having given to our Congregation and to His Church, zealous models who have announced His Plentiful Redemption!

O St. Clement/redemptorist/boast and honor/of Holy Church,/ pray for us.

As a young man, you lived/was an apprentice/ a good and pious baker./You studied with the Abbot Premonstratense.

God called you/with the ringing of the bell/ in the holy family/of the bold missionaries/of Christ the Redeemer.

And when you completed your studies, you were a priest among St. Alphonsus’ sons/in the land of Alatri.

From Rome then you left for your mission, / in Vienna and Poland / you transplanted the dream / of the great De Liguori.

And then in Germany,/Curland and Romania,/and still in Helvetia,/you were a missionary and an apostle of Christ.

Together with the culture,/ you promoted the faith,/you carried out the pious works/and you gathered young people from many nations.

And when Bonaparte/gave you the proposal to go to Canada, you returned to Vienna and stayed there.

To this, you added fraternal charity,/ help for all the poor,/ social commitment,/ the good of sinners.

Among your great merits/was your influence/ on the Congress of Vienna /on the culture of that time, on the romanticism.

Then you died in Vienna /on the fifteenth of March/1820/and then canonized/by Saint Pius the Tenth.

Warsaw and Vienna/ acclaimed you a protector along with St Adalbert and St. Leopold the Third.

Now in the heavenly kingdom, pray to God for us, and the beautiful Madonna with our Saint John, Gerard, and the renowned Alphonsus.